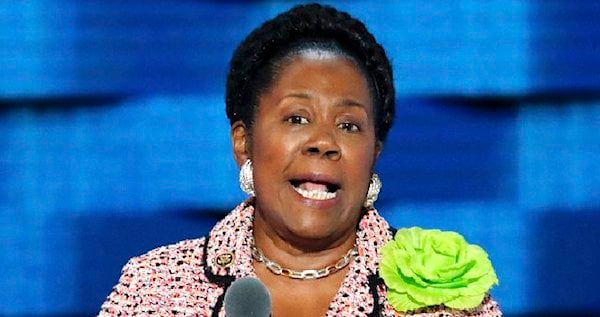 It’s unconstitutional – but who cares about that these days?

The bill would impose criminal penalties for anyone who “published material advancing white supremacy, white supremacist ideology, antagonism based on ‘replacement theory,’ or hate speech that vilifies or is otherwise directed against any non-White person or group, and such published material,” if it was “read, heard, or viewed by a person who engaged in the planning, development, preparation, or perpetration of a white supremacy inspired hate crime.”

What’s the most dangerous part of the legislation?

That it would dare to condemn “antagonism based on ‘replacement theory.'” Because that’s a real thing. How else do explain Joe Biden’s luring of illegal aliens to the tune of at least 5 million in the last two years?

Now, Jackson Lee has never been accused of being a rocket scientist. She’s famous for, during a visit to NASA in the 1990s, demanding to see the flag that astronauts had planted on Mars. DUH! When she was informed that no human being has ever been to Mars, Lee flew into a rage. She accused NASA of racism and pointed out her membership on the “science committee” in Congress. No joke!

Jackson Lee has served in Congress for nearly 30 years, but it’s hard to think of a single thing she has ever done to improve the lives of the people who elected her – high crime, bad schools, drugs.

But mostly she claims that “racism is a national security threat.” Yeah, like the people at NASA were pulling her chain about not showing her the flag planted on Mars.

Despite all that, Jackson Lee has changed in one startling way, as Tucker Carlson pointed out this week. She’s suddenly become a fan of the Patriot Act. Yeah, no kidding. Here’s a recent quote from her: “I remember after 9/11 when we all worked together to ensure the protection of the American people through the Patriot Act and dealing with the FISA courts. We worked together because truth is important.”

Jackson Lee had attacked the Patriot Act on the grounds that it authorized “armed vigilantes” styling themselves as “Minutemen” to mass at our southern border and keep Mexicans from entering our country. Anyone with even a cursory understanding of the legislation knows that the lawmaker had no idea what she was talking about since the Patriot Act has nothing to do with enabling vigilantes or any of the other claims she made at the time. In retrospect, many of us think it has been a bad law, but now Lee has become a fan of the Patriot Act – just like that.

It stumped Tucker, too. “Well, it’s kind of strange if you think about it,” he said. “Why would Sheila Jackson Lee, a self-described liberal, find herself last week praising the secret government courts that liberals once opposed passionately on the grounds that those courts could be used to destroy the constitutional rights of Americans without anyone knowing about it? Secret courts? Liberals were against secret courts, and now the chief liberal in Congress is strongly for secret courts. What’s going on here? Why?”

Continued Carlson: “Well, because those secret courts turn out to be a highly effective way to silence the critics of the Democratic Party, to silence those so-called white supremacists Joe Biden’s always yelling about, not all of whom, by the way, are white. You don’t have to be white to be a white supremacist. You just have to oppose the agenda, and of course, Sheila Jackson Lee knows that very well and that’s why she wants to renew the Patriot Act indefinitely – and there are enough dumb Republicans that she may be able to. But Sheila Jackson would like to go a lot further than that.”

So here she is pushing a bill that would punish anyone discussing “replacement theory.”

Would Chuck Schumer, the leading Senate Democrat, be charged with a felony for talking about it? He’s one who has unashamedly bragged that Democrats are flooding this country with immigrants in order to change the demography to maintain political power for themselves.

Both sides believe in it. But the problem with the congresswoman’s bill is that the First Amendment will still apply to them – on both sides.

This may explain why no one else is supporting her bill.