Authored by Michael Shellenberger via Substack,

In response to anti-police protests, many officers quit, resulting in shortages and a spike in avoidable deaths, from homicides to heart attacks, of innocents… 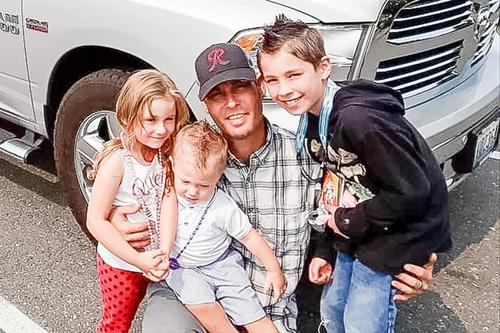 Will Yurek with three of his four children including Drew (far right) who called 911 when his father suffered a heart attack. First responders say the city of Seattle failed to save Will’s life because of a police shortage.

At 1:24pm on Nov. 2, 13-year-old Drew Yurek called 911 to report an emergency: his father Will didn’t feel well and needed help. Medics arrived six minutes later, but were told by dispatch to wait for the police before entering; there was a cautionary note that flagged the occupant of the address as being hostile to first responders. But the note was outdated, and referred to a previous tenant.

Because of a shortage of police officers first reported by Seattle journalist Jason Rantz, the medics were left to wait outside the house until cops could arrive.

At 1:37pm, Drew called 911 again, desperate. He needed help. Medics waited two more minutes before deciding to ignore the order and enter the building. They found Will and started to perform CPR and apply a defibrillator. But by then it was too late. Despite their best efforts, Will, 45 and a father of four, died of a heart attack as Drew looked on.

The police did not arrive until 1:45pm.

Now Drew’s mother, Meagan Petersen, is planning to sue the city of Seattle. “People need to know how the city let this happen,” said Meagan, who is divorced from Will and lives in Utah. “They could have saved Will if the system was working like it should.”

Firefighters and police officers I spoke to said they believe they could have saved the man’s life had there not been a shortage of cops. By the end of 2020, 200 police officers had left the Seattle police force.

What happened to Will Yurek and what his son had to suffer is a tragic but cautionary tale of what happens when activism and moral cowardice at the top of government destroys public safety and common sense in society. It has happened in Seattle, but many other parts of the country have also fallen victim — with many more in peril, too.

Before a vaccine mandate took 100 police officers off the street in mid-October, the Seattle police department was short at least 400 police officers to be at the minimum considered necessary to protect public safety. Why is that?

The overwhelming and unavoidable reason is anti-police protests by Black Lives Matter activists. This happened nationwide, but was worse in Seattle, where Seattle Mayor Jenny Durkan and progressive members of the Seattle City Council allowed anarchists to briefly take over the downtown Capitol Hill neighborhood in the summer of 2020. Durkan did so to show solidarity with anti-police protests in the wake of the killing of George Floyd by a police officer in Minneapolis.

The anti-police protests in Seattle were surprising because in 2018 the City Council had hired a black woman, Carmen Best, for the first time to serve as the city’s police chief. Best opened up for the first time about what happened last summer in an interview with me for my book, “San Fransicko,” earlier this year. Best is also one of the candidates NYC’s Mayor-Elect Eric Adams is considering for NYPD Commissioner. 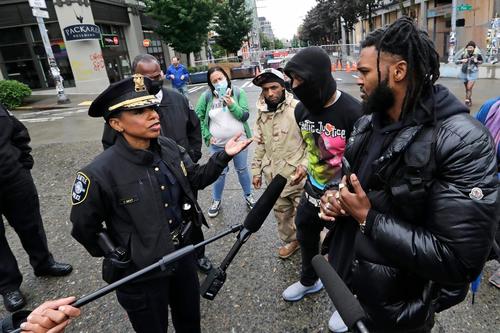 Seattle Police Chief Carmen Best, left, talks with activist Raz Simone, right front, and others near a plywood-covered and closed police precinct behind them on June 9, 2020.

“I refuse to work for this socialist City Council and their political agenda,” said one officer. “It ultimately will destroy the fabric of this once fine city.” Another said the city’s progressive City Council “will be the downfall of the city of Seattle.”

Anti-police protests took a toll around the country. At least two dozen other police chiefs or senior officers resigned, retired, or took disability leave in America’s 50 biggest cities in 2020, while 3,700 beat officers left. Today there are fewer police officers per capita in America than at any time since 1992.

“When people believe the procedures of formal social control are unjust,” notes University of Missouri criminologist Richard Rosenfeld, whose research is relied upon by the Department of Justice, “they are less likely to obey the law.”

Counter to the claims of those who advocate defunding the police as a way to reduce violence, the evidence suggests that fewer cops may mean more police misconduct, because the remaining officers must work longer and more stressful hours. Research has found that fatigue predicts a rise in public complaints against cops: a 13-hour rather than 10-hour shift significantly boosts their prevalence, while back-to-back shifts quadruple their odds.

The people who suffer most from anti-police activism are black. Nationally, 30 times more African Americans were killed by civilians than by police in 2019. Today, black Americans are seven to eight times more likely to die from homicide than white Americans.

If anti-police protests increase homicides, why do groups like Black Lives Matter do it? Because they are after radical system change, not less violence. Radical thinkers, from anarchists to socialists, have for 200 years blamed our capitalist system for crime, and justified crime as a revolutionary act. Crime is a rational response to the high levels of inequality created by capitalism, they argue. 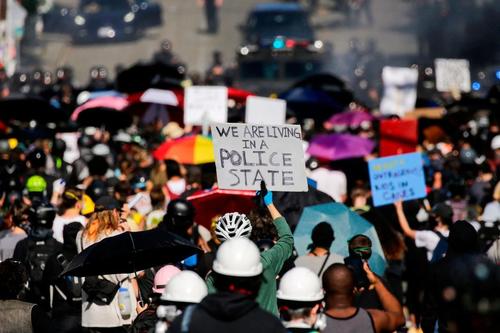 For the most part, societies, including in Seattle, have dismissed these radical arguments. “The anarchists had always been a cosplay clown joke,” Seattle Police officer Christopher Young told me earlier this year. “On May Day they would come and fight the police and break some windows. We’d be like, ‘Okay guys, go back to your mother’s basement.’”

But after the election of Donald Trump as president in 2016, the anarchists rebranded themselves as “anti-fascists,” said Young, and that increased their legitimacy in the eyes of Seattle’s progressive voters. “They said, ‘We’re here to fight the racists and fascists.’”

“The community really wanted more cops,” she told me.

They also wanted more racial and gender diversity and so, said Best, she created a plan “to have a lot more diversity with our hiring, for women and people of color both. We got to almost 40 percent of either minority or women representation as new hires.”

But after the Floyd killing, Seattle anarchists started attacking the police.

“Within that large group of people who were there peacefully protesting,” said Best, “there were groups there to create mayhem, throw rocks, bottles, and incendiary stuff, and point lasers at the officers.”

In June, somebody removed a police barricade that had prevented demonstrators from protesting in front of the East Precinct downtown. “It was decided,” said Best, “to remove the barricade and to allow the demonstrators to fill in the street in front of the precinct. We didn’t want to give up the precinct. I have to tell you it was not my decision.”

Progressive members of the Seattle City Council had pressured Mayor Durkan to order the police to abandon their precinct building.

“The next morning,” said Best, “there were these folks out there armed with long rifles, telling the officers who responded that it was their ‘sovereign land.’ ‘What sovereign property are they talking about?’” Best asked her colleagues. “Well, they’re talking about Twelfth Avenue.” She laughed. “We had never experienced anything like that.” 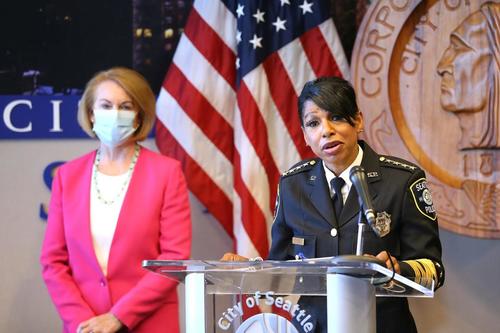 Later, the organizers would rename the area CHOP, for Capitol Hill Occupied Protest. The anarchist leaders invited hundreds of Seattle’s homeless residents to move into the occupied zone, and many did. When asked, Seattle’s mayor insisted that everything would work out fine.

“How long do you think Seattle and those few blocks [will] look like this?” CNN’s Chris Cuomo asked Seattle’s mayor.

But soon after, said Best, “We were getting reports of rape, robbery, assault… I don’t know what the Wild West was like, but it couldn’t have been any worse than that.”

Armed residents at CHOP shot two teenage boys just before it was shut down. At least one of them could have been saved. But CHOP’s unelected leaders didn’t allow first responders in until hours later.

The homicides led Chief Best to demand permission from the City Attorney to retake the neighborhood, which she did a few days later.

But then, in August 2020, a few weeks later, the Seattle City Council voted to cut the budget of the Seattle Police Department. “That means that all these new people that we hired who are black, people of color, and women will be the first ones to go,” Best told the City Council. “Because it’s first in, first out.”

The council said they wanted Best to go through and pick the people to fire.

“Let me get this straight,” she said she told the council. “You want me to pick the white people to go? Are you crazy?’ They were highly dismissive. It was the most bizarre thing that I had ever dealt with.”

“I said that they were being reckless and dangerous and that people are going to suffer for it,” she said. “The next day, one of the city councilors said, ‘We need to cut her salary by 40 percent.’ It wasn’t even on the agenda for them to talk about. It was highly punitive and retaliatory.”

And so Best resigned.

By the end of 2020, 200 police officers had left the Seattle police force.

In truth, much of what people believe about the police is wrong. Police killings of African Americans in our 58 largest cities declined from 217 per year in the 1970s to 157 per year in the 2010s. And there are no racial differences in police killings when accounting for whether or not the suspect was armed or a threat (“justified” vs “unjustified” shooting).

Reducing homicides and other crimes will require more police, and that will require community and political leaders to educate voters, and publicly apologize for their role in unfairly demonizing police officers.

Most of all, we should seek to make amends to the victims of anti-police activism, including the Yurek family, who are mourning the loss of a young father at Thanksgiving time. “Mr. Yurek’s young son acted quickly and competently. Unfortunately, the city of Seattle was neither quick nor competent,” said the family’s attorney, Mark Lindquist of the Herrmann Law Group.

But Will Yurek’s death could gain new meaning if it helps us, as Americans, to view police officers as vital, if imperfect, public servants, and take the measures necessary to affirm their role, and recruit them back into our city police forces.

Michael Shellenberger is a Time Magazine “Hero of the Environment,”Green Book Award winner, and the founder and president of Environmental Progress. He is author of just launched book San Fransicko (Harper Collins) and the best-selling book, Apocalypse Never (Harper Collins June 30, 2020). Subscribe To Michael’s substack here