Shock Waves In The Virginia Gubernatorial Election, Can Biden Help?

With 10 days to go before Election Day, Democrat Terry McAuliffe and Republican Glenn Youngkin are locked in a close battle for governor of Virginia… 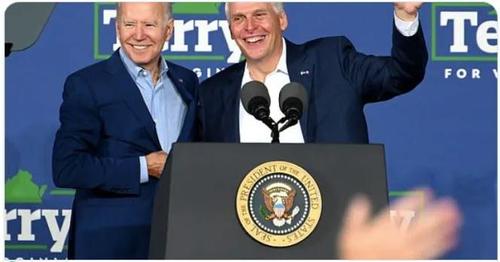 Democrat Terry McAuliffe and Republican Glenn Youngkin are locked in a close battle for governor of Virginia. The last Monmouth (“Mon-muth”) University Poll of the race before the election marks a gain for the GOP candidate from prior polls. Youngkin’s improved position comes from a widening partisan gap in voter engagement and a shift in voters’ issue priorities, particularly around schools and the pandemic.

Youngkin (46%) and McAuliffe (46%) hold identical levels of support among all registered voters. This marks a shift from prior Monmouth polls where the Democrat held a 5-point lead (48% to 43% in September and 47% to 42% in August). A range of probabilistic likely electorate models* shows a potential outcome – if the election was held today – of anywhere from a 3-point lead for McAuliffe (48% to 45%) to a 3-point lead for Youngkin (48% to 45%). This is the first time the Republican has held a lead in Monmouth polls this cycle. All prior models gave the Democrat a lead (ranging from 2 to 7 points).

This marks a shift from prior Monmouth polls where McAuliffe held a 5-point lead. https://t.co/cDXa8ufpsu

At a September 28 debate, Mr. McAuliffe bluntly declared: “I don’t think parents should be telling schools what they should teach.”

Youngkin took that pitch and ran with it. He promises more accountability, more charter schools, and an end to critical-race indoctrination.

The Monmouth analysis is pretty good and gets to the Democrats’ annoyance/disbelief at the schools issue. It didn’t poll as a top voter issue – covid and the economy did – but McAuliffe’s gaffe inspired Youngkin to hammer it relentlessly and change media/voter focus.

Taken Out of Context?

McAuliffe: “I have been taken out of context.”

Translation: “I accidently said exactly what I thought, instead of the poll tested remarks prepared for me by my staff, who know that I wont get elected if I say what I actually think.” https://t.co/bP3ujZDi4Y

What a hoot. The translation is perfect.

Translation: “I accidently said exactly what I thought, instead of the poll tested remarks.”

Biden to the Rescue?

Biden campaigns for McAuliffe as new poll shows the race is even https://t.co/SXtPDWyLo7

Is that supposed to help? Whom?

Obviously Biden thinks it will help McAuliffe, but color me skeptical. If an incoherent Biden gets on the stage with McAuliffe, it just might help Youngkin.

My guess Biden sticks to cameo appearances, tries to say nothing, and the pluses and minuses balance out to nothingness.

Harris to the Rescue?

VP Kamala Harris campaigns for Terry McAuliffe, Democratic gubernatorial candidate for Virginia in Dumfries on Thursday. The race between McAuliffe & Republican Glenn Youngkin has narrowed to a tie just two weeks ahead of Election Day, according to a new Monmouth University poll. pic.twitter.com/v5MGSUftsh

Is that supposed to help?

I’ll take a stab that this is negative for McAuliffe. Harris is not well liked and proven useless at the border.

Monmouth poll: Education went up in importance by ten points at the same time Youngkin jumped ahead of McAuliffe on trust on the issue. pic.twitter.com/9u5MOiipB3

Those who sag they’re certain to vote: McAuliffe 47, Youngkin 47.

Voters who have voted in past VA-GOV races: Youngkin 49, McAuliffe 45 pic.twitter.com/4PTKIuQLMs 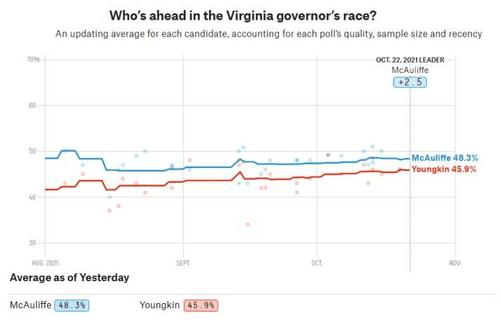 The Trafalgar Group also has the poll as tied. But 538 corrects that to +1 for Younkin.

Amusingly, after having repeatedly blasted Trafalgar in the 2020 presidential election, 538 now ranks Trafalgar as A-.

McAuliffe’s Gift to the GOP

The Wall Street Journal discusses McAuliffe’s Gift to the GOP.

Mr. McAuliffe this week released an ad that radiates panic. The screen pans over pictures of Mr. McAuliffe’s children, as the Democrat complains his Republican opponent took his words about education “out of context.”

Candidates stuck explaining what they really meant (two weeks from an election) are candidates in trouble. And every sign is that Mr. McAuliffe’s campaign has been on a perilous slide since that fateful comment.

The moment illustrates again the power of education as a wedge issue. It crosses socio-economic lines, giving Republicans the opportunity to peel back crucial suburban voters who helped Joe Biden to the White House. And it crosses racial lines, providing the party a chance to build on gains among blacks, Hispanics and Asian voters.

The issue resonates as strongly with Mr. Youngkin’s base, which is energized by a candidate willing to confront entrenched school boards and teachers unions. Monmouth finds GOP voter enthusiasm is booming, with 79% of Republicans saying they are very motivated to vote (7 points higher than Democrats) and 49% saying they are enthusiastic about the election (23 points higher). Education transcends the divide between working-class and college-educated voters.

Virginia isn’t an outlier; it’s a road map. While the Beltway press corps has obsessed over protests in the Virginia suburbs, the same fury is ripping across districts in every state—including those crucial to Democrats’ congressional majorities. In New Hampshire ( Sen. Maggie Hassan ), parents line up to rail at school boards. In Colorado (where Sen. Michael Bennet used to be Denver’s superintendent of schools), board members are quitting, getting recalled or being challenged by entire slates of reformist parents. In Arizona ( Sen. Mark Kelly ), the state GOP has taken to running to “school board boot camps” to handle the unprecedented flood of newly engaged citizens.

The McAuliffe experience shows how tricky the issue can be for Democrats. Teachers unions (core Democratic donors) demand fealty. Activists demand backing for transgender policies and critical-race curriculums. Yet it turns out this standard progressive line is offensive to millions of reengaged parents. Mr. McAuliffe’s first instinct was to bow to and back the educational establishment—which didn’t go well. He’s since tried to turn the tables and duck questions by incorrectly claiming CRT isn’t taught in Virginia schools and is a fiction—a “racist” “dog whistle.” That’s not fooling a single Virginia parent.

Tossup. I don’t know. Perhaps a slight edge to Youngkin, simply based on momentum.

But there is a second issue that no one above addressed and it can easily be the deciding factor.

Youngkin is pro-life in a deeply blue state. Women are over half the voters. This is just not a good issue for Republicans. In fact, it’s a terrible issue for them.

Once again, the base is going nowhere. Independents and moderates will decide the election.

Can Youngkin win enough independents and swing voters on education to counter a major flaw on abortion?

The real takeaway that the WSJ missed is the GOP needs to bend towards the middle.

The middle wants an end to critical-race indoctrination. But the middle includes other wedge issues like abortion.

The middle does not want the radical Left policies of the Progressives who have hijacked Biden’s agenda.

Instead, we have extreme politics on both sides where independents have to chose one wedge issue over another.