Despite the White House’s best efforts to revive a scaled-down version of President Biden’s domestic agenda centerpiece – known as ‘Build Back Better’ – it looks like the talks have been nipped in the bud. But instead of Joe Manchin pulling the plug, this time around, that honor belongs to Arizona’s Kyrsten Sinema. 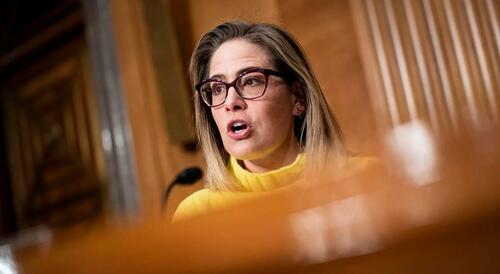 Axios reported last night that Sinema has told donors that it’s “unlikely” the BBB plan envisioned by the White House will come to fruition. That’s despite the fact that the Administration left an opening in its 2023 budget proposal to accommodate whatever deal Democrats managed to strike.

Previously, the word around Capitol Hill was that Congress would vote on a slimmed-down iteration of BBB before Memorial Day. Unfortunately for the Dems, the party would need the support of both Sinema and Manchin to push any package through the Senate.

Instead of BBB, Sinema reportedly told Axios that she’s focused on the $10 billion bipartisan COVID relief package (which is roughly half the size of the White House’s initial request).

To be clear, that deal would be paid for using unspent funds from the $1.9 trillion coronavirus relief package passed in March 2021.

But there’s a silver lining for Democrats: Sen. Manchin is reportedly telling climate activists that he’s open to raising taxes on corporations and wealthy Americans to pay for roughly $550 billion in new climate-related spending. He also reportedly wants to bolster America’s energy independence by approving more permits for offshore drilling and domestic pipelines.