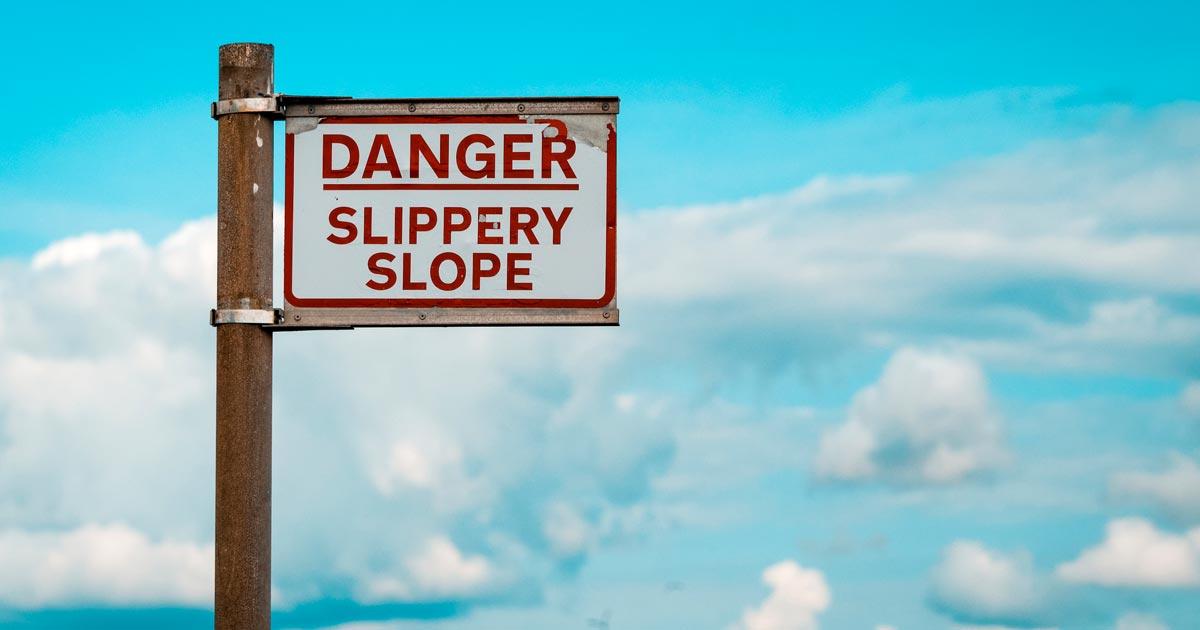 In my article last week, I talked about Michael Huemer’s notion of “false fallacies.” These are often listed in logic books as bad arguments, but some of them, Huemer suggests, are actually good arguments, at least if suitably modified.

This week, I’d like to talk about another false fallacy, one that Huemer doesn’t include on his list. This is the “slippery slope” fallacy, and at least one version of it really is a case of bad reasoning. Here is a good account of it:

In a slippery slope argument, a course of action is rejected because, with little or no evidence, one insists that it will lead to a chain reaction resulting in an undesirable end or ends. The slippery slope involves an acceptance of a succession of events without direct evidence that this course of events will happen.

Example:…. Today late for ten minutes, tomorrow late for an hour, and then someday you will simply cease to show up.

I’d like to suggest that two arguments resembling slippery slopes are actually good arguments, though they aren’t always dispositive. The first of these is this: “If you have already accepted policy A on certain grounds, then you can’t reasonably object to policy B, which is supported on the same grounds as policy A.” Here is an example that is especially important for us today. In his notorious decision in Buck v. Bell (1927), Justice Oliver Wendell Holmes upheld a compulsory sterilization law, ending his opinion with the famous line: “Three generations of imbeciles are enough.” He supports his ruling with the version of the slippery slope I’m now talking about. He says that if we accept conscription, and also compulsory vaccination as a health measure, we should accept sterilization as well.

Here is the relevant passage from his opinion:

We have seen more than once that the public welfare may call upon the best citizens for their lives. It would be strange if it could not call upon those who already sap the strength of the State for these lesser sacrifices, often not felt to be such by those concerned, in order to prevent our being swamped with incompetence. It is better for all the world if, instead of waiting to execute degenerate offspring for crime or to let them starve for their imbecility, society can prevent those who are manifestly unfit from continuing their kind. The principle that sustains compulsory vaccination is broad enough to cover cutting the Fallopian tubes. Jacobson v. Massachusetts, 197 U. S. 11. Three generations of imbeciles are enough.

Someone against compulsory vaccination and the draft might try to find some way in which sterilization is more of an infringement of rights than the other two measures, but he will have a tough time of it.  The true lesson of Holmes’s opinion is that if we reject the draft and sterilization, as most people nowadays do, we should reject compulsory vaccination as well.  Rights shouldn’t be lightly cast aside once it is alleged that the public is in danger, all the more so if, as in the corona-19 situation that now confronts us, the efficacy of the remedy is, to say the least, controversial. I pass over in silence the vexed issue of whether emergencies ever justify what would otherwise be rights violations, but clearly, this is an area where we ought to be on our guard.

Another example of the “good” slippery slope argument occurs in Lord Keynes’s letter to Friedrich Hayek about The Road to Serfdom. In the book, Hayek warns that central planning can lead to the destruction of liberty but himself allows a number of welfare state measures, including old age pensions and a minimum income.  Keynes says in response:

I come finally to what is really my only serious criticism of the book. You admit here and there that it is a question of knowing where to draw the line. You agree that the line has to be drawn somewhere [between free enterprise and planning], and that the logical extreme is not possible. But you give us no guidance whatever as to where to draw it. In a sense this is shirking the practical issue. It is true that you and I would probably draw it in different places. I should guess that according to my ideas you greatly underestimate the practicability of the middle course. But as soon as you admit that the extreme is not possible, and that a line has to be drawn, you are, on your own argument, done for since you are trying to persuade us that as soon as one moves an inch in the planned direction you are necessarily launched on the slippery path which will lead you in due course over the precipice.

Hayek has some possible responses here. He might say that even if you can’t draw an exact line, you can tell within a reasonable approximation when you have reached the danger zone, just as you can see when someone is bald without knowing the exact number of hairs on someone’s head (if there is such a number) that allows him still to be called “bald.” But even if this response has some merit, we can see that Hayek is in trouble. A defender of the free market should learn from Keynes’s letter not to make concessions to antimarket measures.

I’d like to turn to the other sort of quasi–slippery slope argument that can be accepted. This argument has the form “If you follow policy A aiming to achieve goal G, you will find that A will fail to achieve G. If you still want to achieve G, you will then have to try to eliminate the obstacles that block A from getting to G. But doing this won’t work either, and if you continue the process, you will wind up where you really don’t want to be, or, at any rate, where you shouldn’t want to be.”

A classic example of this argument is Ludwig von Mises’s analysis of price control. If planners who want to make milk available to poor people cheaply impose price controls, the result will be a shortage of milk: sellers will tend to withdraw from the market, and demand for milk will increase. If the government imposes more controls in order to lower costs for sellers of milk, these will fail also, and, if the process continues, we will soon get government control of the entire economy.  In contrast to the bad slippery slope argument, the continued bad consequences aren’t posited without evidence. Mises’s point is that the situation that led the planners to act will recur, and he has reasons for saying this.