A surge in cross-asset volatility over the past two weeks has left investors with many questions about its nature and implications and whether it is safe to buy the dip (technically there is no longer a dip).

In a note seeking to ease client concerns, SocGen strategists Jitesh Kumar and Alain Bokobza say “don’t leave the party yet” because they found that the main trigger for the recent market turmoil has been “investors seeking to deleverage their more illiquid/expensive assets to protect profits as the year ends.” And while the market may be shaken by residual liquidity tremors over the next couple of weeks, “recent trends nevertheless underpin our recommendation to remain invested and stay overweight in equities, real assets (including commodities), and the dollar.”

Drilling down on the increasingly nervous market since the Fed’s recent hawkish turn and the move higher in rates since the September FOMC meeting, SocGen points to several other catalysts that have kept investors on their toes, including:

One read of the above is that these combined pressures have increased demand for bonds, while Omicron spooked some investors into cutting over-extended positions on the Friday following Thanksgiving amid low market liquidity. These pressures triggered very sharp moves in some widely owned illiquid assets, including:

Additionally, as the SocGen duo notes, some highly extended inflation plays have been among the most impacted, e.g. both crude oil and breakeven inflation linkers saw substantial one-day drops on 26 November as shown below (the French bank is quick to note that it remains overweight on both commodities and inflation-linked bonds as they provide protection against higher inflation prints and a Fed tightening cycle over 2022).

The market turbulence also took an already extended VIX complex up to the highest levels since the March 2020 crash. So illiquid was the market that the VIX bid/offer spread exploded to 4 vol points, but here too SocGen thinks the Left Tail risks are in fact a manifestation of a lack of liquidity in downside hedges

But how does the sharp risk off episode square with dollar weakness – after all the dollar usually surges when there is a dump in risk.

According to SocGen, dollar weakness coinciding with broader market weakness “was unusual but makes sense when seen through the deleveraging lens.” The chart below left shows that during the turmoil on 26 November, the typical funding currencies (EUR, JPY, CHF) strengthened while EM currencies (most of which are high yielders) weakened. This had the overall effect of weakening the broad dollar, especially in the G10 space. However, this trend is expected to reverse and take us back to a strong dollar environment given that we see a full Fed hiking cycle ahead of us (unless of course Omicron or whatever variant comes next ruins these plans).

Looking at actual stock positions, SG’s derivatives team notes that options positioning on US small caps had been increasing throughout October. Therefore, it says, “the risk-off episode came at an inopportune moment for some well invested market participants, who likely had to reduce risk in US small caps faster than they would have preferred.” As can be seen in the chart above right, Russell 2000 index turnover in the cash market was overwhelmed by the futures market on 26 November, triggering large intraday moves.

Separately, SocGen also points to the combined position changes visible in the CFTC data for hedge funds and asset managers which it says provides further evidence of the pressure on Russell 2000 futures, which in aggregate saw $5.4bn in selling in the holiday-curtailed last week of November (23-30 Nov data). This was the largest weekly sale of Russell 2000 futures as per CFTC data in more than four years.

In contrast to small caps, positioning on large cap equities has not been under the same pressure. Asset manager + hedge fund flows in S&P500 e-mini futures totalled -$6.4bn in the last available dataset, a relatively small amount for the S&P500. More tellingly, the overall flow on the Nasdaq 100 was slightly positive over this period at +$0.8bn, as shown in the right-hand chart above.

Generally speaking, short-term repo is also a useful indicator of the demand/supply profile of major equity indices. A sharply negative repo rate usually signifies very high demand for balance sheet exposure relative to supply, while a very positive repo rate signifies risk aversion. The chart below shows the 1-month repo rate on S&P500, while the balance sheet pressures faced by banks during the fourth quarter of every year are well known. That said, the current quarter, despite recent weakness in broad equities, has not seen positive repo levels, indicating that US large caps have not been hit by material drawdowns according to SocGen (and their price). 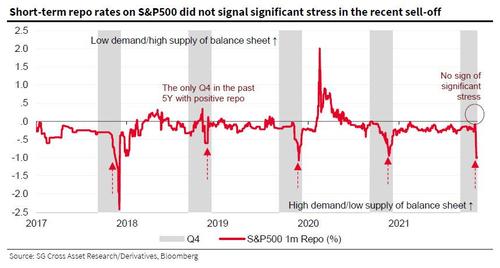 So what should traders do?

In a word, nothing, at least that’s the recommendation of SocGen. The bank continues to believe that tightening spells are flattening, and thus recommend being positioned for a flattening of the yield curve, which also supports US stocks that are longer-duration assets and are tilted toward quality. In terms of sectors, long Information & Technology against the financial sector is very well correlated with the trend in the yield curve and is one of our key sector calls linked to the Fed tightening cycle.

Sure enough, the curve has not only flattened at the very long end, but market pricing of the total number of hikes from the Fed over the next few years has also reduced. Hikes previously priced for 2024 and  2025 have all been brought forward to 2023, as the chart below shows. Indeed, as we first showed a week ago, the market is now pricing a small probability of a rate cut in 2025. 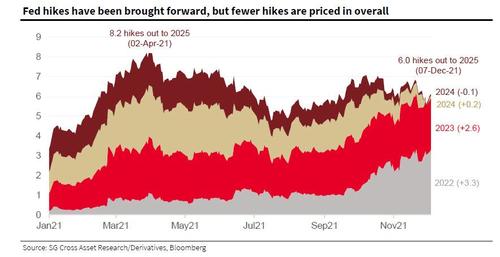 One take on these moves is that i) either inflation is not going to be a longer-term problem, and that longer-duration assets should therefore continue to do well, or ii) inflation will be a problem but the Fed will be powerless to do anything about it without blowing up the entire market in the process. Our money is on the latter.

Last but not least, SocGen continues to see support for broader financial markets going into next year as private-sector balance sheets remain strong. To wit, US corporates hold close to $7 trillion in liquid assets and US households have $17 trillion tucked away in deposit and money market funds post the pandemic (then again most of this cash belongs to the 1% with few benefits trickling down to the lower 90%). In short, the French bank believes that there is still plenty of cash on the sidelines and investors will sooner or later need to move away from cash in a 6%+ inflation environment. 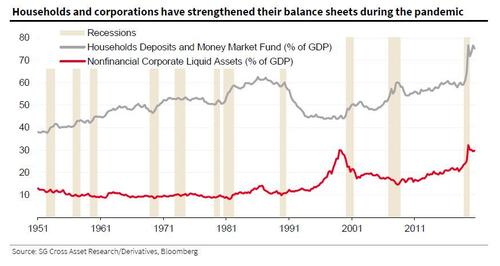 In conclusion, SocGen’s remains alert to the risks that would flare up in the event of more hawkish central banks as well new COVID variants, but for now it recommends its playbook for 2022, “which is working well so far.” 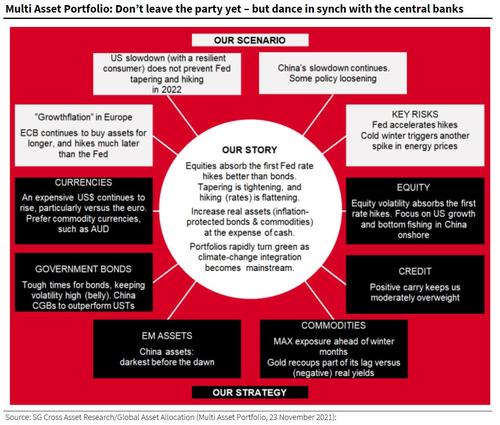