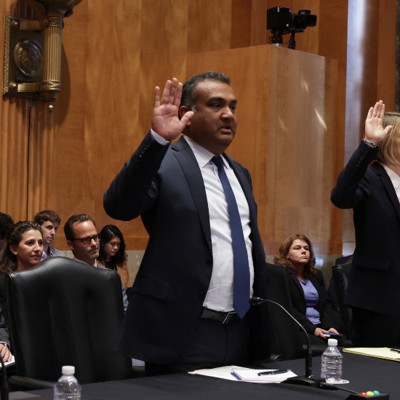 Lawmakers expressed national security concerns about the ways in which social media platforms moderate extremist content, how their algorithms and business models may promote the spread of harmful posts and videos, and about their relationships with foreign governments during a Senate Homeland Security and Governmental Affairs Committee hearing on Wednesday.

Members of the committee heard from a two-panel set of witnesses, including former executives from Twitter and Facebook—now known as Meta—who said social media platforms are incentivized to share provocative content, because it draws the most user engagement, and current executives from four large social media companies—Meta, TikTok, Twitter and YouTube—who defended their efforts to quickly identify and remove harmful content from their sites.

Committee Chairman Gary Peters, D-Mich., expressed concern about social media platforms’ moderation practices, saying that the companies “have still not taken the necessary steps to limit the spread of the hateful, dangerous and extremist content that has motivated real world violence.”

Peters showed several examples of extremist content from social media platforms during the hearing, including a “boogaloo boys” recruitment video posted on a Facebook group, a tweet alleging the FBI is America’s greatest threat and a TikTok suggesting civil war with the Internal Revenue Service. And Peters also said that the companies were slow to combat QAnon-related conspiracy theories shared on their sites, telling the witnesses that it “spread unchecked on your platforms for years before you started to down rank and then banned it.”

Social media executives pushed back on the notion that their platforms benefit from the spread of potentially harmful content, saying that the proliferation of violent and illegal content would have an adverse effect on their advertising-centric business models, as well as citing their adherence to existing policies and community standards when it comes to moderating users’ posts and videos.

Neal Mohan, YouTube’s chief product officer, said advertisers have told them they do not want to be associated with any content that promotes hate and violent extremism and “when that content is on our platform, they walk away.”

Beyond questions about companies’ moderation practices and approaches to provocative content, members of the committee also expressed serious concerns about how social media platforms could be weaponized by bad actors and hostile nation states to spread misinformation or capture the data of U.S.-based users.

Sen. Rob Portman, R-Ohio, the ranking member of the committee, said that one of the most concerning consequences of social media “is the ability for our adversaries to exploit platforms to harm Americans for their own geopolitical gain.” Portman and many of the other senators on the committee grilled Vanessa Pappas, TikTok’s chief operating officer, about the company’s Chinese ownership and ties to the Chinese government.

Lawmakers, in particular, expressed alarm that TikTok could turn users’ data over to the Chinese Communist Party or be used as a tool to promote Chinese propaganda, referencing the U.S. military’s ban on members using TikTok and a warning from the U.S. House of Representatives’ chief administrative officer last month about ‘high-risk’ security concerns with the app.

“I am highly concerned about TikTok and how China may be leveraging their influence to access the platform’s data on Americans,” Portman said, citing in part a BuzzFeed News report from June which said that U.S.-based users’ data had been accessed from China.

Pappas pushed back on the news report, saying that TikTok does not have any offices based in China and has “very strict access controls around the type of data that [employees] can access and where that data is stored, which is here in the United States.”

When pressed several times by Portman, however, about whether TikTok will commit to cutting off the flow of U.S. users’ data and metadata to China, Pappas said that “our final agreement with the U.S. government will satisfy all national security concerns.” TikTok is currently working with the Committee on Foreign Investment in the United States—or CFIUS—to address security questions about its handling of user data.

“I’m concerned that you’re not able to answer the question, except to say that you will not make the commitment to cutting off this data to China,” Portman said.

When asked by Sen. Jon Ossoff, D-Ga., however, about whether the Chinese government exercises any influence “over TikTok’s corporate behavior or corporate policies,” Pappas was unequivocal in her response.

“In no way, shape or form. Period,” Pappas said.

50 mins ago
Is the church in America really dying?

50 mins ago
Is the church in America really dying?