The recent selloff in markets has been hard for a lot of investors, but SoftBank’s Masayoshi Son has probably seen more of his net worth evaporate than any other billionaire besides Facebook’s Mark Zuckerberg.

According to Bloomberg, the SoftBank billionaire has seen his net worth fall by $25 billion over the past year, to just $13.5 billion today. While it doesn’t come close to the $70 billion he lost during the dotcom implosion, it’s still a massive sum.

It looks like we were on to something back in 2019 when we posited that SoftBank might be the tech bubble era’s “short of the century”.

Of course, what’s even more problematic than Softbank’s paper losses is the firm’s loan-to-value ratio. During the good times, SoftBank leveraged up and used the money to invest in more tech stocks. 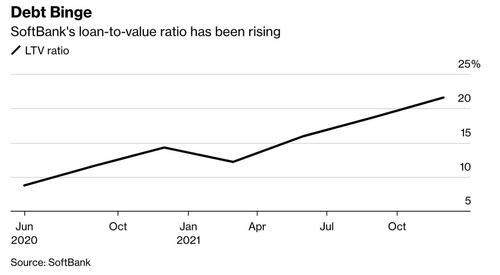 Now, the stocks that it has borrowed against – most notably the firm’s massive holdings in Alibaba, which has been one of the hardest-hit stocks during the selloff in Chinese stocks.

The chart is SoftBank’s loan-to-value ratio, which Son says he checks four times a day. It’s key to how he staged his comeback over the past two decades after losing $70 billion during the dot-com crash.

Just last year, SoftBank was flying high, borrowing against its wildly lucrative stakes in tech investments such as Alibaba Group Holding Ltd. and plowing the money into the promising upstarts of tomorrow. Even when there were epic failures – Wirecard AG or Greensill Capital – profits elsewhere buried the problem.

And if the pain keeps coming, SoftBank just might be in store for an epic margin call on its debt.

The stock has tumbled almost 60% in the past year and the loan-to-value chart that Son obsesses over daily just keeps ticking higher, indicating SoftBank’s net debt is getting unwieldy relative to the equity value of its holdings. Some market watchers are flagging the risk of margin calls.

“There’s no good news in sight,” said Tomoaki Kawasaki, a senior analyst at Iwai Cosmo Securities Co. “If they’re asked to increase collateral, it’ll mean investors have to be more cautious of the finance risks the company’s facing.”

Already, SoftBank has been forced to sell some of its equity holdings at a brutal discount.

The market for new share sales, critical to SoftBank’s success, has dried up. Didi Global Inc. sank a record 44% on Friday after the ride-hailing company suspended preparations for a Hong Kong listing. In the latest sign that SoftBank is strapped for cash, its Vision Fund sold $1 billion of shares in South Korean e-commerce giant Coupang Inc. at a discount last week.

SoftBank bears are ready to pounce, as SoftBank’s asset-backed debt strategy is looking less like a smart way to redeploy capital into early stage startups, and more like a pyramid scheme.

SoftBank has long relied on asset-backed financing, which is cheaper than other forms of funding. This includes pledging assets in exchange for cash to invest in early-stage startups and using prepaid forward contracts – where SoftBank receives money upfront for a future sale of its holdings.

As of December, it had pledged more than half of its stakes in Alibaba, T-Mobile US Inc., Deutsche Telekom AG and its telecom unit SoftBank Corp. Asset-backed financing makes up $54 billion of the conglomerate’s $128 billion in total debt, according to a BI analysis.

“They have to keep raising financing, and the complexity of the ways they do it is probably what makes people less comfortable,” BI’s Chen said. 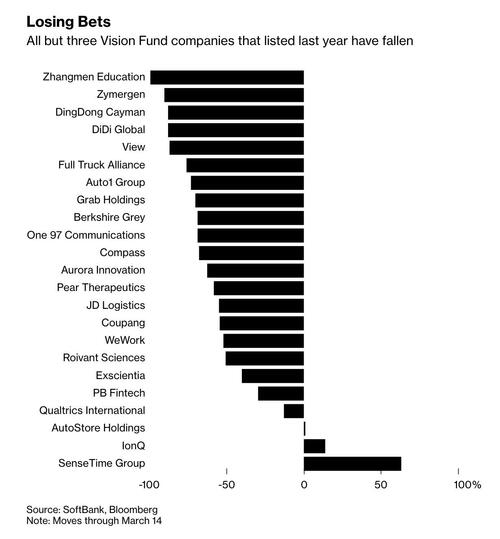 Still, there’s one group of investors who haven’t entirely given up hope on SoftBank (or at least that’s what they tell their clients). The investment banks and brokerage firms still largely rate SoftBank’s shares as a “buy”, according to 18 out of 20 analysts tracked by Bloomberg.

So much for being the “conductor of the AI revoluton”.