After a stellar 3Y auction and a subpar 10Y sale yesterday (although judging by the plunge in yields those who bought it are quite happy today), moments ago the Treasury concluded the week’s refunding issuance where investors were eyeing to see if today’s sale of $22BN in 30Y paper would translate in the first 3% coupon since March 2019.

Internals were also in line, with Indirects taking down 69.7%, also above last month’s 65.23% and the six-auction average of 64.9%, if below March’s 71.52%. And with Directs awarded a solid 16.6%, Dealers were left holding the smallest bag at just 13.7%, which is to be expected in a world where they have to wait at least a few months before the Fed’s upcoming QE episode will allow them to promptly flip this paper back to the Fed. 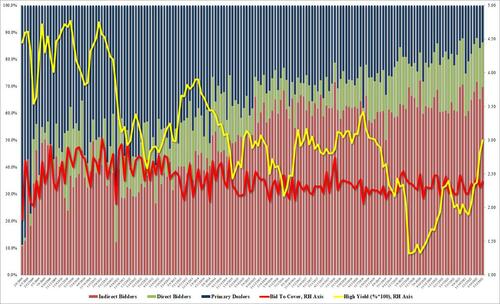 With the auction pricing in slightly stronger than expected, there was no perceptive market reaction, and the 10Y traded flattish, last seen around 2.848% where it has traded for much of the day as yields continue to slide on growing recession fears.