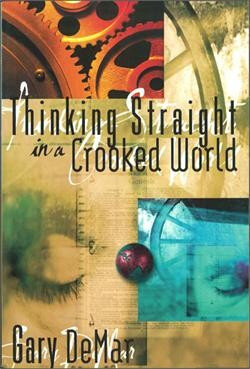 The following article, ‘Some People Just Want to Watch the World Burn’, was first published on The American Vision.

In The Dark Knight (2008) Batman meets up with his most diabolical enemy—the Joker, played fiendishly by the late Heath Ledger. There’s nothing funny about Ledger’s portrayal of the Joker. It’s not Jack Nicholson’s clownish Joker. This Joker is psychotic. Or is he?

Alfred warns Bruce Wayne that the Joker is no ordinary criminal. Neither power nor money motivates him. We are never told what makes him tick. Alfred offered the only way to approach the Joker: “Some men just want to watch the world burn.” Here’s the entire scene:

After torching millions of dollars of cash, Joker says, “It’s not about the money. It’s about sending a message. Everything burns.” But to what end?

Some people just want to watch cities burn, businesses destroyed, and other people die, and they have “rational” reasons for it!

The following email was sent to me by someone who calls himself “Grimly Fiendish”:

What I enjoy the most about being Canadian is the fact that I can leave this conservative s**t-hole and go home, which I plan to do in the near future. I have had enough of the inbred sub moron level christians trying to legislate morality and force their archaic, hypocritical bulls**t down my throat. I guess that the inbreeding will take care of them eventually. Personally, I would like to see Darwinism practiced on a more active level, at least if they try to cross the border into Canada. So frankly f**k you and I sincerely hope that you have not managed to breed so your faulty genetic material ends with you.

By the way, the genetic material does not end with me. I have two children and nine grandchildren. There are many more Christian families like mine.

When things go off-kilter in some people’s lives, the pieces of absurdity that they’ve heard and seen over the years begin to construct a uniquely distorted way of looking at the world with its own internal logic that makes sense as long as the person remains in the logic of that constructed world. The evil, absurd, illogical, and irrational become good, normative, logical, rational and by extension justified in terms of the newly constructed mental edifice.

There is some history to what we are seeing today. None of what’s happening in the United States sprung up spontaneously or without a set of operating assumptions. Consider the following about the Columbine shooters:

When Eric Harris and Dylan Klebold killed Darrell Scott’s daughter, Rachel Joy Scott, and 12 other students and teachers at Columbine High School, the two teens used Charles Darwin’s ‘survival of the fittest’ theory to justify their actions. Harris even wore a ‘natural selection’ T-shirt on the day of the killings.

These ideas permeate our culture even though the logical extension of what survival of the fittest might mean to some people who are no longer taught that they are created in the image of God and are bound by His laws, both natural and supernatural. They learn in biology class that they are highly evolved animals. There is no moral law among the animals. The evolutionary struggle for life was violent. There was no moral overseer as the process evolved.

Joann Rodgers describes what nearly every young person today is taught in the name of settled science:

Animals, insects, and bacteria, with their multiple desires, mutinous genders, alternative sex lives, and sometimes violent mating habits, behave in ways that we humans, in our arrogance, consider graceless if not immoral. And yet what we may consider profane in nature is indeed profound…. With evolutionary biology as our guide, however, we are better able to see what has long been concealed in our nature and nurture, and that the profound is not at all profane. [1]

A Columbine copycat plot was foiled in New Bedford, Massachusetts, in 2001 with the arrest of Eric McKeehan (17) and two other students who planned to kill “thugs, preps, and faculty” at their high school by detonating explosives and opening fire as they fled.

A shooter in Pearl, Mississippi, left behind writings extolling his admiration for Hitler and Nietzsche, both students of Darwinism. In the 1920s, Clarence Darrow appealed to a judge to sentence Leopold and Loeb—two self-pressed superiors of the Darwinian kind—to life in prison instead of death by hanging by arguing that they were inspired to commit murder from studying Nietzsche at the University of Chicago. Darrow also referenced Darwin’s theory by claiming that the two killers were “made that way” through the forces of nature gone wrong.

Gary DeMar shows the power of biblical thinking and the desperate need for it in the church today. Thinking Straight in a Crooked World is designed to identify the bends in the road of ideas and repair them with biblical, straight thinking.

Consider C. T. Palmer and R. Thornhill’s A Natural History of Rape (1997). [2] The authors suggest that rape “is either an adaptation favored in past evolutionary environments by natural selection … or a by-product of other biological characteristics of human males, such as aggression and promiscuity.” In any event, rape has an evolutionary origin. Since the publication of A Natural History of Rape, evolutionists have fallen all over themselves to disassociate evolution from the morality of rape.

Here’s how Palmer and Thornhill explain it: “There is no connection here between what is biological or naturally selected and what is morally right or wrong.” [3] Why not? What is it in the evolutionary theory that makes behaviors either morally right or wrong? As materialists, evolutionists cannot account for moral theory. Animals do not consider morality when they leave their weaker young to die or when they attack and kill other animals and eat them. Why should we? Dogs rape dogs. Cats rape cats. Why can’t humans rape humans? Given evolutionary assumptions, why is rape OK for dogs and cats but not for humans?

Evolution is a continuum by which non-human animal behavior is inextricably linked to human animal behavior: “Rape or at least rape-like acts clearly exist in many species, giving additional weight to both rape’s ‘natural’ roots and its ‘value’ in our biological and psychological legacy.” [4]. Rape is “natural” and has “value.”

These types of events aren’t confined to the United States.

At least seven people were killed when a teenaged gunman opened fire at a school in southern Finland on November 7, 2007, hours after a video was posted on YouTube predicting a massacre there. The gunman was a pupil at Jokela High School, a teacher who witnessed the attack told Reuters, and had walked through the school firing into classroom after classroom…. The YouTube video, entitled ‘Jokela High School Massacre—11/7/2007,’ was posted by a user called ‘Sturmgeist89.’ ‘I am prepared to fight and die for my cause,’ read a posting by a user of the same name. ‘I, as a natural selector, will eliminate all who I see unfit, disgraces of human race and failures of natural selection.’ Sturmgeist means storm spirit in German. (Reuters)

The murderer described himself as “a social Darwinist.” Within the manufactured world of a consistent anti-god Darwinism, eliminating perceived inferiors makes perfect logical sense.

Not everyone who embraces Darwinism becomes a mass murderer or a rapist or a terrorist disrupting the cities of America for some unforeseen end. Some people, however, fit the pieces together of no God, no moral absolutes, humans are evolved animals, survival of the fittest got us here, men can become women and women men by an act of the will, and a once rational being living in a once rational world begins to think irrationally, but for him or her, it all makes perfect sense.

Some people never recover from the ultimate implications of their warped worldviews. The late R.C. Sproul (1939–1917) wrote, “God’s existence is the chief element in constructing any worldview. To deny this chief premise is to set one’s sails for the island of nihilism. This is the darkest continent of the darkened mind—the ultimate paradise of the fool.” [5].