As the clock struck midnight in Spain, thousands of people poured into the city streets in the early hours of Sunday, celebrating the official end of the local coronavirus curfew. 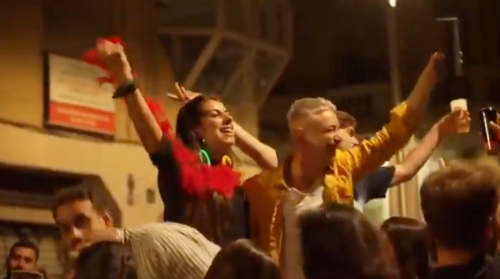 The 11 p.m. curfew was lifted in 13 of the country’s 17 regions at midnight. Footage from the beaches of Barcelona to the streets of Madrid saw thousands of young people dancing, hugging, and chanting “freedom.”

As the clock struck midnight Barcelona residents poured into the street to celebrate the end of the local curfew. Spain ended a 6-month-long national state of alarm on Sunday following a decrease in virus cases and a boost in vaccinations. (AP Video/Renata Brito) pic.twitter.com/KadXj83d8m

After a strict stay-at-home order went into effect at the start of the virus pandemic in early 2020, the country’s second state of emergency kicked in last October. It granted people more freedoms but still, late-night curfews restricted social gatherings.

Nationwide, there are 198 cases of COVID-19 per 100,000 population. Some regions are experiencing higher rates, like Navarra, which will maintain restrictions until the spread is controlled.

In Aragon, the cases stand around 297 per 100,000. Authorities are continuing the curfew in that region. In the Balearic Islands, where the infection rate is 59 per 100,000, the government will maintain the curfew.

The highest infection rate is seen in Basque Country, with an infection rate of around 463 per 100,000. However, efforts to maintain the curfew there were scrapped by the Basque High Court on Friday.

“I am a bit worried, although the most vulnerable people are already vaccinated, I think we should still be careful of the cases increasing again,” Natalia Pardo Lorente, a biomedical researcher at the Centre for Genomic Regulation in Barcelona, told CNN Sunday. “Even while the curfew was still active Friday, I saw large groups of people drinking in the Ciutadella, and it was after ten at night.

“Is there really a need to be gathering in groups of 100 people or more in parks? Why is it not enough to meet your close friends and that’s it?” Lorente added.

Spain has been hard hit by the pandemic. More than 3.5 million infections have been recorded, along with 78,000 deaths. Across Europe, Spain is the fourth-hardest hit country in Europe, behind France, the UK, and Italy.