After March’s explosive surge higher in ‘soft’ survey data on the manufacturing (and services) sector, analysts expected a very modest increase in April (despite China’s disappointing survey data.. and the ongoing slide in ‘hard’ economic data in the US).

Markit’s Manufacturing PMI for April (final) was a slight disappointment at 60.5 (60.7 exp, 60.6 flash) but well above the 59.1 in March. This is the highest level ever for Manufacturing PMI.

ISM Manufacturing was at its highest since 1983 in March and a small improvement was expected… but it plunged from 64.7 to 60.7 (even as prices paid increased further). 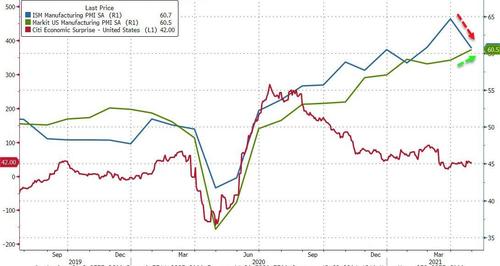 The headline index was also pushed higher by unprecedented supplier delivery delays (ordinarily a sign of improvement in operating conditions). 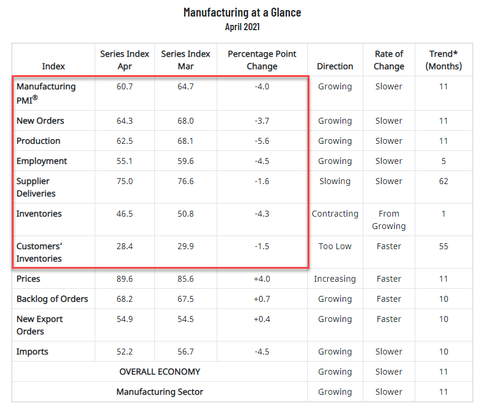 The PMI data for April signalled another marked monthly deterioration in vendor performance across the goods-producing sector, with lead times lengthening to the greatest extent on record. Alongside raw material shortages and pressure on supplier capacity, firms linked delays to ongoing disruption to transportation, including port congestion. 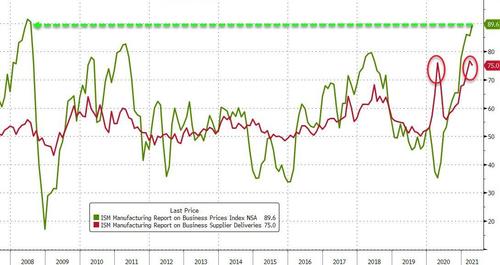 Everything except Propylene is higher in price…

Chris Williamson, Chief Business Economist at IHS Markit said: “US manufacturers reported the biggest boom in at least 14 years during April. Demand surged at a pace not seen for 11 years amid growing recovery hopes and fresh stimulus measures. 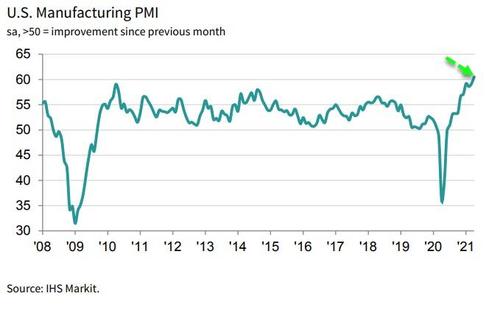 However, Williamson notes that “supply chain delays worsened, however, running at the highest yet recorded by the survey, choking production at many companies. Worst affected were consumer-facing firms, where a lack of inputs has caused production to fall below order book growth to a record extent in over the past two months as household spending leapt higher.”

Which is pushing prices dramatically higher…

“Suppliers have been able to command higher prices due to the strength of demand for inputs, pushing material costs higher at a rate not seen since 2008.

“Attempts to expand capacity via hiring extra staff gained further momentum, though in some cases staff shortages were an additional constraint on production. However, with confidence in the outlook continuing to run at one of the highest levels seen over the past seven years, buoyed by vaccine roll-outs and stimulus, further investment in production capacity should be seen in coming months, helping alleviate some of the price pressures.”

The bottom line is that stagflation is upon us – As prices soar at record pace, production is stagnating… 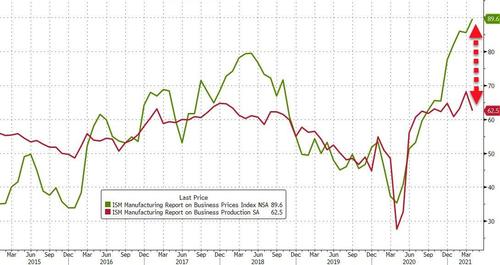 Get back to work Mr.Powell!