The Hill was thrown into near chaos this week when Senate Majority Leader Chuck Schumer (D-NY) and Sen. Joe Manchin (D-WV) unveiled the Inflation Reduction Act.

Republicans charged that Manchin misled them into supporting a $280 billion chips and science bill – a bill they would have otherwise opposed. Others criticized the name of the bill, which contains a significant number of climate change items long sought by the Democrats.

Now, the respected Wharton School at the University of Pennsylvania has found that the Inflation Reduction Act would actually have no impact on inflation. 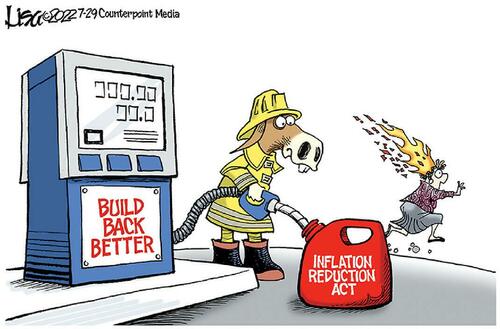 Manchin premised his change on the fact that the bill would reduce inflation despite raising taxes and expenditures. The Act would combat climate change, extend enhanced Obamacare subsidies, and reduce the budget deficit by roughly $300 billion.

Jon Huntley and John Ricco found that the bill “would reduce non-interest cumulative deficits by $248 billion over the budget window with no impact on GDP in 2031. The impact on inflation is statistically indistinguishable from zero.”

That is $52 billion less in deficit reduction than claimed by the Democrats and the review found the bill would actually “very slightly increase inflation until 2024 and decrease inflation thereafter.”

Wharton’s budget unit functions like an academic Congressional Budget Office in offering non-partisan budget analysis. At a time of growing orthodoxy and viewpoint intolerance, it remains an independent voice on budgetary issues.