Step Aside AMC: Here Are The Most Shorted Stocks Right Now

Four months after the Reddit crew sparked a historic market-wide short squeeze across a handful of small and mid-cap companies, which knocked out some of the most respected hedge funds in the world with Melvin Capital requiring a multi-billion bailout from Ken Griffin and Steve Cohen, the squeeze is back sending heavily shorted names like AMC, whose short interest we pointed out last week was off the charts…

… and which has exploded higher, a squeeze which has now shifted over to names such as Bed Bath and Beyond and various other small and mid-cap names. 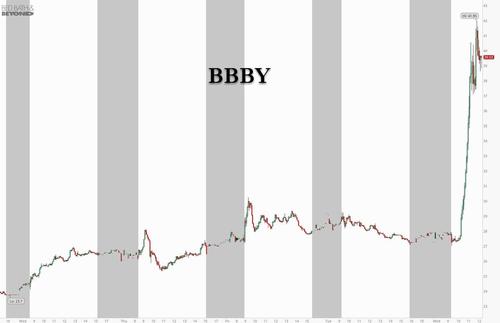 Of course, there is no mystery what’s behind this: just like in late January when the meme squeeze phenomenon first emerged, the common theme here is that all these stocks are extremely heavily shorted, and retail investors are seeking to squeeze the shorts once again and thus time with even more stimmy power.

To be sure, one look at the chart of the most heavily shorted names shows what’s going on. 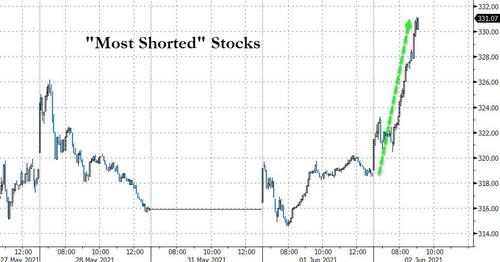 So, just like in late January, we have compiled a list of the most heavily shorted names. It may come as a surprise to some that the former leaders here, GME and AMC are not even in the top 30.

So which companies are? Below we have screened for the most shorted Russell 2000 names (based on float as a % of short interest), and which we will use to constitute our latest and greatest short basket. 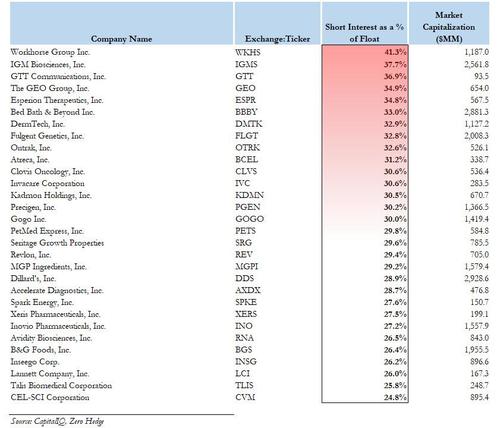 If the performance of our previous most shorted index is any indication, going long a market cap-weighted basket of these names – and especially the smaller, less liquid ones – could turn out to be the trade of a lifetime. 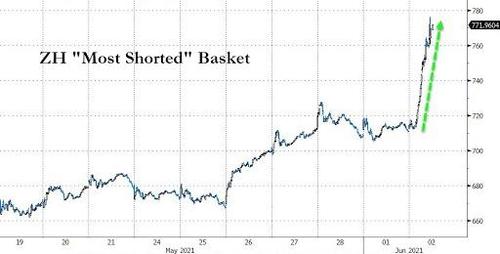