The stock market is liable to reach a new low due to the triple threats of recession, inflation and poor liquidity, while the October nadir had few of the characteristics normally associated with a major market bottom.

The current base in this bear market, reached in October, is a line in the sand. If it is not to be breached the economy will have to safely navigate the channel between non-resurgent inflation on one side and no recession on the other. But it’s a very narrow channel, leaving a slim possibility both fates will be avoided.

Stocks in this cycle are very sensitive to inflation. Falling inflation, as the market began to expect from the middle of last year, meant real rates would become more restrictive, especially if nominal rates were to be held as steady and as elevated as the Fed desired.

The market pushed back, not believing the economy was resilient enough to handle this for long. The more the Fed talked rates higher, the greater the market priced in rate cuts, keeping expected real rates less restrictive than they otherwise would’ve been, and leading to the deepest yield-curve inversion since the 1980s.

Equities benefited from the benign environment. The relative price of crash insurance fell as more rate cuts were priced in. Why pay up for insurance when it looks like the Fed will soon have your back? 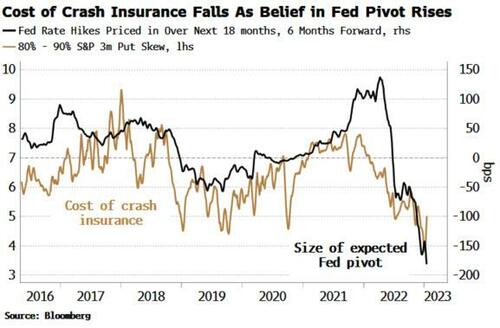 The flipside of this is that an unexpected change in the trajectory for inflation would be negative for equities. Either an easing in how fast CPI is falling, or an outright rise, would be enough to cause yields to jump and stocks to sell off.

But if inflation carries on falling at a rapid pace, that’s probably reflective of a slowing economy – one that is highly likely to be in recession this year.

Recession prediction is not easy, with individual indicators having a patchy historical record. However, when multiple indicators point to a recession at the same time – as they are today – the odds begin to swing dramatically in favor of one. To be of the view that there will be no recession (which may of course happen) means dismissing a ton-weight of evidence pointing in the other direction.

Equities face more downside if a recession hits. The S&P is currently only down from its peak by about 60% of the median peak-to-trough fall seen in a recession. Copper, HY credit and S&P EPS are pricing in an even lower probability of a recession, while the yield curve implies one is guaranteed. 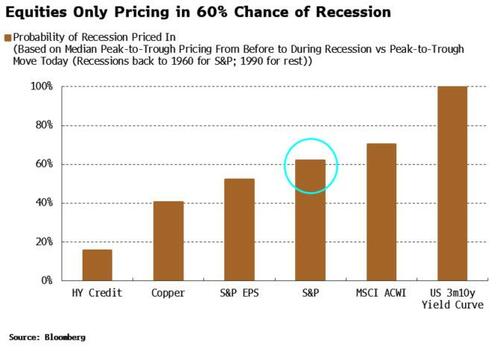 If the economy manages to thread the needle of avoiding a recession while inflation continues to trend down, equities should rally. But then they become part of the problem. The Fed wants to see sufficient tightening in financial conditions to give it confidence inflation will be durably snuffed out.

Conditions can’t tighten while equities are rallying, given they are about 80%-90% negatively correlated with each other. No recession and well-behaved inflation will give the Fed all the impetus it needs to clip the stock-market’s wings by tightening policy more.

Even if the Fed is done tightening, the liquidity backdrop is already very unfavorable for equities, further increasing the chance of new lows. One of the most useful measures of liquidity is excess liquidity – the difference between real-money growth and economic growth – which remains very low. Excess liquidity is like a safety net for risk assets; without it, stocks are exposed to much steeper falls than when it is high and rising. 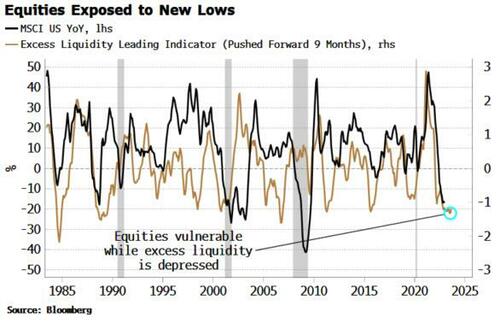 Durable market bottoms are normally marked by major capitulation and selling exhaustion. However, the low seen in October exhibited few of these signs. The percentage of NYSE stocks above their 200-day moving average dropped, but has been lower in other major market bottoms, while the number of stocks making new 52-week lows was significantly above levels it hit during the 2009, 2015/16 and 2020 tradeable lows. 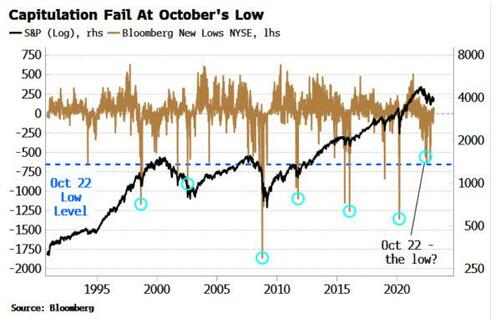 There was no spike in volatility or volume, and other asset markets such as credit remained relatively well behaved. Further, retail-investor cash allocations in October stayed well below the highs they reached in the 2001 and 2008 bear markets, showing the buy-the-dip mentality has yet to be properly tested.

China’s re-opening is increasingly being seen as a reason for optimism, but it would have to be an inflationless boost to global demand that would allow the Fed to ease back as planned and leave equities unperturbed. Even then, the assumption that China quickly goes back to where it was after three years of lockdowns is a bold one.

A line in the sand is not supposed to be crossed; stocks look unlikely to heed that advice.