Japan has intervened in the Forex markets to defend the Yen. Let’s discuss why that tactic will not work, and the irony of the process itself. 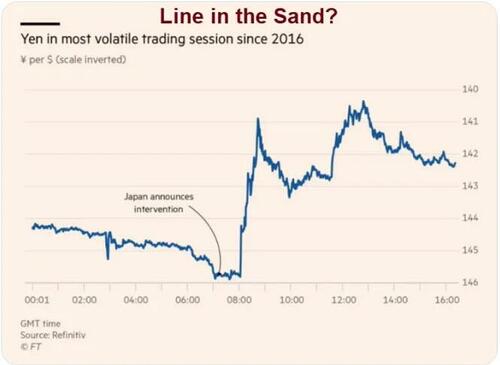 “What it looks like when a big central bank steps into an FX market. The Bank of Japan  draws a line at 146.”

What it looks like when a big central bank steps into an fx market. BoJ draws a line at 146.https://t.co/sfOW2HqqAr pic.twitter.com/VTSX1deGRU

In 2016, Japan complained about “one-sided” moves, a signal of possible intervention. Instead, of taking the warning into account, the yen soared to its highest since October 2014.

Japan is angry. Rightfully so, in a perverse way. What is Japan angry about? It has not succeeded in destroying its own currency, a seemingly simple task.

It’s pretty damn pathetic when you cannot destroy your own currency. But that’s where we are given the competitive currency devaluation madness.

How one-sided can you get going down while complaining about going up?

If you cannot destroy your own currency, don’t blame others with “one-sided” complaints, just try harder. 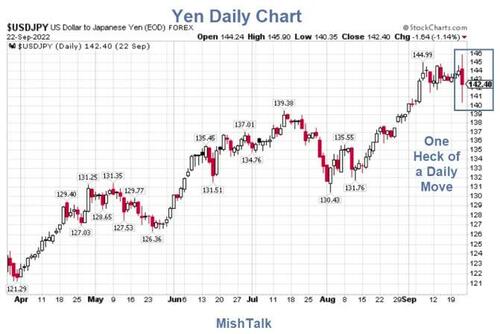 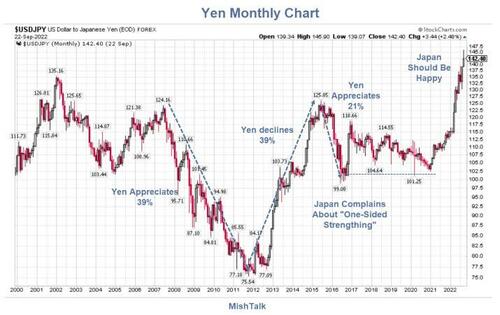 Japan wanted a weaker Yen. It should be pleased. But it isn’t.

Instead, Japan is complaining with words and intervention actions about getting what it wanted.

They never have, so why would this time be any different?

A reporter told Soros something to the effect that the BOE just spent some number of £ to defend the pound. Soros replied with a question “Ok, what is the BOE going to do tomorrow?”

The next day, known as Black Wednesday, the pound collapsed.

Black Wednesday (or the 1992 Sterling crisis) occurred on 16 September 1992 when the UK Government was forced to withdraw sterling from the European Exchange Rate Mechanism (ERM), after a failed attempt to keep its exchange rate above the lower limit required for the ERM participation. At that time, the United Kingdom held the Presidency of the Council of the European Union.

The crisis damaged the credibility of the second Major ministry in handling of economic matters. The ruling Conservative Party suffered a landslide defeat five years later at the 1997 United Kingdom general election and did not return to power until 2010. The rebounding of the UK economy in the years after Black Wednesday led to a reassessment of the legacy of the crisis, as John Major’s government adopted an inflation targeting policy as an alternative to the ERM and set the foundation for a prospering economy in the years prior to the financial crisis of 2007–08, and the British public turned increasingly Eurosceptic.

OK, What Will the BOJ Do Tomorrow?

It’s a fool’s move to waste foreign reserves defending a currency. Nothing good ever comes from it because all it does is paper over a problem.

Japan’s intervention will never work although it’s possible that it will later look like it did.

For example, if this is an exhaustion move on the dollar, and the Yen slide stops, it is because that was going to happen anyway, not because of the intervention.

Japan is playing with fire.

The more currency reserves it blows now, the greater the Yen will collapse later when the BOJ, like the BOE finally throws in the towel.

If Japan wants to stop the slide, it needs to aggressively hike interest rates, something it refuses to do.

I have been discussing the possibility of a currency crisis for years, suggesting that Japan was a likely candidate.

For discussion, please see End of the 40-Year Bull in Debt and a “Global Depression” Threat

How many are watching emerging markets and the Yen?

Over the years I maintained a currency crisis was far more likely in Japan than the US. We will see.

Regardless, the end of the 40-year bull market in debt does not rate to be a pretty affair.

So, asking again,  What Will the BOJ Do Tomorrow?