Two videos surfaced on YouTube Thursday of a massive 316-meter-long containership smashing into another vessel resulting in a crane collapse at the Port of Kaohsiung in Taiwan. 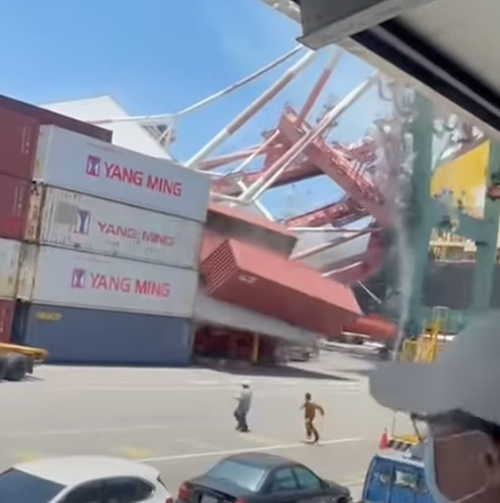 Scenes from multiple points of view of the incident appeared as they were from the American horror movie “Final Destination,” but this is a real-life port accident.

Dockworkers can be seen running for their lives to avoid being struck by the flying containers.

Luckily, no one died, and several workers sustained minor injuries.

A statement from the Port of Kaohsiung said OOCL Durban was heading to Pier 66 when the vessel veered off course.

“The ship was booked to berth at Pier 66 of Kaohsiung Port, but when the ship passed through Pier 70, it collided with the bow of the “Yong Hung Ship (Gross Tonnage 32,720)” anchored at Pier 70 slightly damaged, and one of the overhead crane One GC8 bridge crane. After the collapse of the GC8 bridge crane, the adjacent GC6 crane was seriously damaged. A total of 1 collapsed, 1 severely damaged but not collapsed and 30-50 containers were damaged, and 1 GC8 bridge crane was caused,” the port said in a statement (translated into English).

Kaohsiung is the 14th busiest in the world, just behind Antwerp, and the last thing strained global supply chains need is a major port facility with reduced capacity.

Already, we’ve reported shipping containers are falling overboard at “alarming rates,” mainly because containerships are stacking truck-size intermodal containers to the brim to deal with some of the busiest shipping lanes ever.