Surprisingly Strong 2Y Auction Stops Through, Sees Most Directs Since 2019

Ahead of today’s sale of $60BN in 2 year notes, rates bulls said that the collateral shortage and the competition for short-term paper would lead to investors moving out of the curve resulting in higher demand for today’s auction, while worries about reduction in coupon sizes in the coming months would also underpin auction demand. On the other hand, bond bears said the auction was likely to tail due poor timing ahead of the FOMC decision on Wednesday may be overshadowed by factors like a rise in the delta variant, weakness in China’s U.S.-listed shares and strong seasonality for two-year offerings.

The Bid to Cover dipped modestly but not materially from last month, sliding to 2.471 from 2.540 in June and below the 2.54 six-auction average. 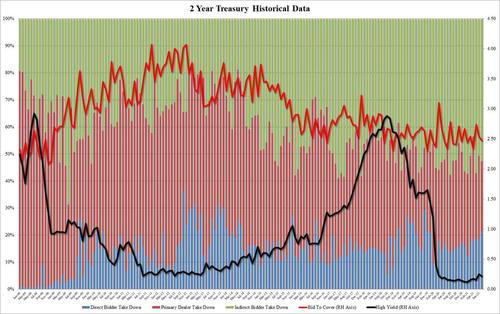 Overall a surprisingly strong auction which negated any concerns about an incremental hawkish surprise out of the Fed on Wednesday.