It’s been more than a decade since we penned “The US “Discovers” Nearly $1 Trillion In Mineral Deposits In Afghanistan” in which we highlighted the colossal untapped mineral deposits that reside in Afghanistan.

President Joe Biden’s decision to rapidly and completely withdraw from Afghanistan makes even less strategic sense if readers go back to our 2010 post where we quoted “Confessions of an Economic Hit Man: Part 2, the 21st Century paradigm”? Which said,

“Yet the American officials also recognize that the mineral discoveries will almost certainly have a double-edged impact. Instead of bringing peace, the newfound mineral wealth could lead the Taliban to battle even more fiercely to regain control of the country.”

“Which is why it will be best to have the US military not only stay in Afghanistan indefinitely but to get a million man reinforcement surge.”

Readers have known for a while Afghanistan was never about the opium trade or the war on terror but rather the massive deposit of minerals essential for renewable energies. 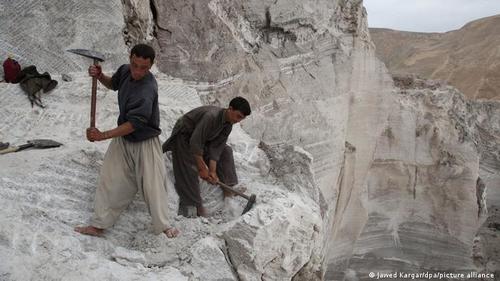 So in the Economic Hit Man context, why would the Biden administration suddenly pull out of Afghanistan after 20 years if the play all along was about securing rare earth metals?

We don’t want to speculate the Biden administration’s intentions, nor do we have any idea. Still, one thing is sure is that the Taliban now control the world’s largest lithium deposits is becoming friendly with China.

Conservative media outlet Free West Media says new relations between the Taliban and China could increase its global dominance in green energies, such as the lithium-ion battery supply chain market.

Unbeknownst to many, the blog points China and Afghanistan share a 130-mile stretch border. For more on this, here’s Free West Media’s latest piece titled “Taliban now control one of the world’s largest lithium deposits.”

A Bloomberg New Energy Finance Limited report in 2020 highlighted China’s global dominance in the lithium-ion battery supply chain market, due to its grip on raw material mining and refining. In 2019, the US imported 80 percent of its rare earth minerals from China, while the EU states imported 98 percent of these materials from China.

China incidentally also shares a small border with Afghanistan called the Wakhan Corridor – 210km long. While the length of the border may appear insignificant, its location is crucial. Afghanistan is believed to have large deposits of gold, iron, copper, zinc, lithium and other rare-earth metals, valued at over $1 trillion. “Afghanistan may hold 60 million metric tons of copper, 2,2 billion tons of iron ore, 1,4 million tons of rare earth elements (REEs) such as lanthanum, cerium, neodymium, and veins of aluminium, gold, silver, zinc, mercury…” according to a 2020 report in The Diplomat.

But the Wakhan Corridor has been used by Islamic Uighur militants opposed to Chinese rule in Xinjiang. Chinese officials meeting with the newly installed Taliban are certainly aware of the risk that radical Islamists pose: “We hope the Afghan Taliban will make a clean break with all terrorist organisations including ETIM (East Turkestan Islamic Movement) and resolutely and effectively combat them to remove obstacles, play a positive role and create enabling conditions for security, stability, development and cooperation in the region,” said a high-ranking Chinese official.

Why is this important?

Global demand for lithium is projected to increase 40-fold by 2040, according to the International Energy Agency, along with rare earth elements, copper, cobalt, and other minerals also abundant in Afghanistan. And these minerals happen to be concentrated in only a small number of pockets around the world.

The Bolivian Andes may contain 70 percent of the planet’s lithium, and many analysts argue that extracting lithium from brine as in Bolivia is more environmentally friendly than extracting it from rock.

Interestingly, metallic lithium and its complex hydrides are used as high-energy additives to rocket propellants, thermonuclear weapons, or even as a solid fuel.

In 2010, the US Department of Defense called Afghanistan “Saudi Arabia of lithium” after American geologists then discovered that the country’s deposits amounted to at least a trillion dollars. Lithium is an essential ingredient to produce long-lasting batteries used in electric cars in particular. The battery of a Tesla Model S, for example, has about 12 kilograms of lithium in it.

Ten years later, these metals have not yet been extracted. The Taliban is unlikely to sell the metal to Americans, and the United States views China, the world’s largest lithium producer, as its main rival. And the US wants at least 40 percent of its cars to be electric by 2030. Thus the previous US-led government in Kabul had hoped that the promise of mineral wealth would entice President Trump into making a commitment to stay in the country.

“Afghanistan can be an appropriate place for US industry, and specifically the mining sector, to look at opportunities for investment,” Mohammad Humayon Qayoumi, the former chief adviser to Afghan President on infrastructure, human capital, and technology, once opined.

But Tom Benson, a PhD in the Department of Geological Sciences at Stanford University, has focused his research on a 16,3 million-year-old supervolcano on the Oregon-Nevada border which contains the largest lithium deposit in the United States. A number of other active volcanoes may hold the same deposits, and there is a particularly “exciting” one, called Bogoslof, in Alaska. That may be why the US has lost interest in Afghanistan.

“The Taliban are now sitting on a stockpile of one of the most strategic minerals in the world,” said Rob Schoonover, an ecology expert at the US think tank Center for Strategic Risks, in an interview with Quartz. “The question of whether they will be able to play this role will be important in the future.”

Could the Taliban benefit from this resource?

The exploitation of these rare earth metals could undoubtedly give the Taliban an economic advantage. Before the US retreat, the Afghan government had considered selling lucrative mining contracts to American companies. But such agreements were always discussed with the view of keeping the US military in the country and sharing the spoils. With the Taliban now leading the government, the option of involving American mining concerns is of course out of the question.

“As long as there are safer and more reliable sources (of metals, note) elsewhere, the use of Afghan minerals will remain low,” said Schoonover. However, the Taliban already have experience in extracting rare stones. By mining lapis lazuli, the Taliban earns at least $300 million per year.

Ashraf Ghani, the Afghan president now in exile, thought that the abundance of mineral deposits were a curse for his country. Indeed, many economists are aware of the fact that such rich deposits in developing countries generally become a source of corruption and violence, to the detriment of the locals.

The Taliban will have to find a way to participate in the global lithium trade, much larger than their lapis lazuli trade. Access to Afghan central bank reserves has been denied to the Taliban by the US. The new Afghan leadership could also have trouble in convincing Chinese investors who once lost $3 billion in 2007 in a Taliban copper mine that could not be exploited due to persistent administration blunders.

However, good reason for China to become involved in the extraction of lithium in Afghanistan may not only be the wealth it could generate, but also to avoid more ecological damage caused by lithium mining on its own soil and to limit the scope of Islamic infiltration. The extraction of this metal leads to water shortages and air pollution, but the rewards could coax Taliban leaders into addressing the Uighur headache.

So the question we ask readers: Did the Biden administration just give away Afghanistan’s rare earth minerals to China? There’s no way in hell that the Taliban will let Western countries mine the land. This would suggest China could soon secure mining deals and start extracting lithium, putting the country ahead of the US in the green energy space.