In the past month, a feud has broken out between the so-called “team transitory”, comprising mostly of pro-Fed, pro-Biden commentators, who urge the public to ignore the “transitory” hyperinflation that by now is painfully obvious to everyone (see today’s UMich report for the gruesome details), and not to blame either the Fed or the administration for the collapse in the dollar’s purchasing power. Then there are the realists who see a much more ominous trend in deglobalization – you know, the same trend that allowed inflation to decline along with interest rates since the early 1980s – and warn that even when the currently supply chain logjam ends some time in 2022, inflation will still be far higher than in the past few decades.

The latest CPI print was viewed as a victory for “team transitory” because some of the prices that had spiked during the pandemic eased, led by used cars, whose prices this year soared amid supply chain disruptions and a rebounding economy has been a major contributor to the jump in U.S. inflation.

This was enough for TT to declare victory and proclaim that it’s all downhill from there.

There is just one problem: real-time data is now showing that used car prices are once again on the rise after the summer slippage, confirming what we said moments after the CPI report was published this week.

The Manheim U.S. Used Vehicle Value Index, a measure of wholesale used cars, increased 3.6% in the first 15 days of September compared with the same period last month, and is again back near all time highs. That’s the first month-over-month rise in the index since May; in total the index has risen by more than 50% since the COVID lows in early 2020. 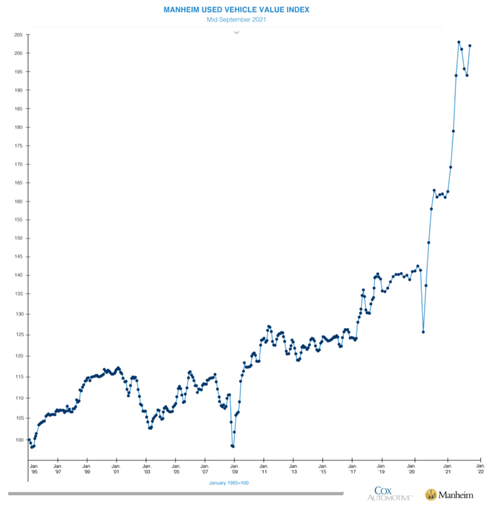 The index jumped 24.9% from the same period a year ago through the middle of the month, indicating that not only has the drop in used car prices ended but that higher prices are coming, and with them more humiliation for team transitory, as the spike in the Mannheim index assures a sharp jump in the CPI print either next month or in November. 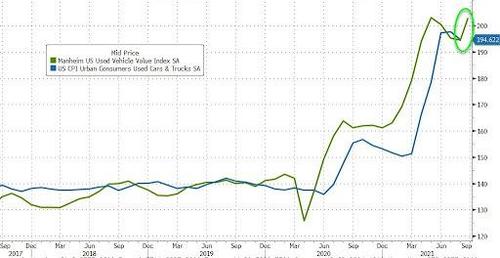 “The latest trends in the key indicators suggest wholesale used vehicle values will likely see further gains in the days ahead,” according to the Manheim report.

“Wholesale used vehicle prices rose rather significantly in the first half of September compared to the first half of August,” Michelle Krebs, an executive analyst at Cox Automotive, told Bloomberg. “Dealers appear to be stocking up on used vehicles, which have seen supply stabilize somewhat, to have something to sell because new vehicle inventory remains low.”

Elevated used car prices have primarily been due to snarled supply chains and a shortage of materials (such as semiconductors) for new car production, which pushed dealer inventories to all time lows… 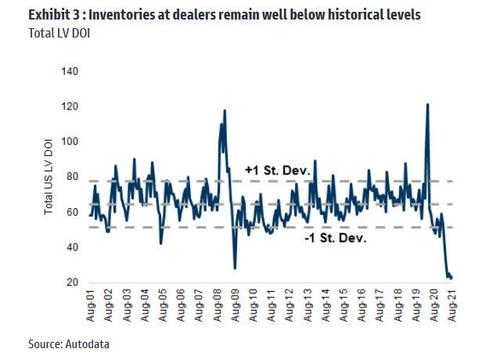 … and forced consumers to buy on the secondary market.

“The main pressure continues to come from new car supply shortages. With the increase of delta variant, many manufacturers have significantly cut their production,” said Brian Benstock, general manager and vice president of Paragon Honda and Acura, a dealership in Woodside, Queens, in New York City. “A story about used cars cannot leave out the story about new cars.”

Incidentally new car prices are now also surging, and will likely continue to rise as carmakers have said production of new vehicles this fall will continue to be constrained by a chip shortage and the spread of Covid-19 in Southeast Asia. IHS Markit slashed its vehicle production forecast for this year by 6.2%, or 5.02 million vehicles, the biggest decrease to the outlook since the chip shortage emerged. In the latest sign of fallout, on Thursday, General Motors said Thursday it is cutting production at six North American assembly plants.

Finally, even ignoring used car prices, a more ominous increase is emerging in such core inflation as shelter costs and Owner Equivalent Rent.  Commenting on whether core inflation slowed or sped up in August, Bank of America economists said that the traditional measure of core CPI inflation rose just 0.1% mom in August, below the consensus (0.3%), BofA said the following:

As BofA concludes, when it asks rhetorically “Is it time to break out the champagne” for team transitory, the bank responds “We don’t think so.”