Salaries for tech workers in cities like New York and San Francisco are slipping, marking the first fall in 5 years.

The drop in pay comes as a result of a push toward remote work, according to Bloomberg, citing a report by Hired. The report looked at more than 525,000 interview requests and 10,000 job offers via Hired’s workplace from January 2019 to June 2021.

Tech workers in San Francisco are still set to earn the highest rate in the country, but it has fallen 0.3% from last year to $165,000.

However, in cities like Seattle, home to Amazon, pay rose to $158,000. Austin, Texas also saw a bump higher in salary since attracting companies like Facebook and Google. San Diego saw salaries move higher by 9.1% to $144,000. 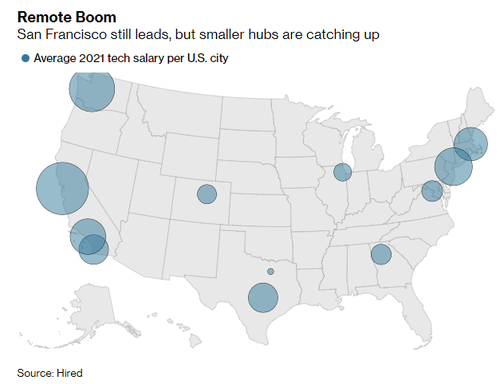 Hired Chief Executive Officer Josh Brenner told Bloomberg: “We’re seeing movement to some of these smaller markets driven by the actual lifestyle there. People are realizing San Diego has a nice way of living, good weather and it’s by the beach.”

80% of tech workers are still working remotely, the report says. “A majority” would like it to stay that way.

In addition to remote work, people are moving out of areas like San Francisco and New York due to the high cost of living, which offsets the higher salaries in those cities.

Brenner concluded: “Austin has a lot to offer people and there are obviously tech companies moving there. But also a lot of remote workers are saying ‘I’m going to leave my very expensive big city and move to Austin.’”