The Teen Mom 2 alum has sparked concern as her followers have begged her for months to “stop messing” with her face.

Now many believe that Chelsea, 31, has had a secret plastic surgery procedure after her husband Cole, 34, shared a new TikTok video on Thursday.

In the clip, the reality star dad was seen pushing a shopping cart through a home goods store, filled with fall items.

He lipsynced to the words: “Where are you?” as he looked for his TV personality wife.

The video then quickly switched over to Chelsea who was standing in the Halloween section with her arms filled with spooky decor. 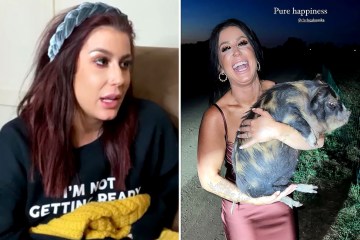 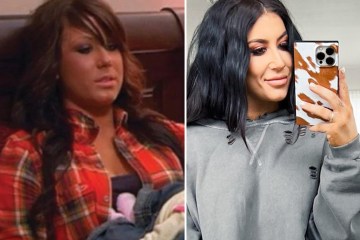 “I’m over here,” she replied with her own lipsynced sound.

Cole captioned the comedic post: “She loves her skulls,” but fans were more concerned about the appearance of her face.

Many raced to Reddit to discuss what seemed to be a huge change in Chelsea’s bone structure, suggesting that she might’ve had a secret cosmetic procedure done.

“Chelsea 3.0? She looks like a different version of herself again,” one wrote, resharing a screenshot of the TikTok.

“I feel like her face just stretches in length constantly. I don’t understand,” a second agreed.

A third noted: “It’s like her face went from horizontal wide to vertical wide over the years.”

“She can’t change the fact that her eyes are way too close to eachother no matter how much plastic surgery she has,” a fourth remarked.

“I’ve read she had her buccal fat removed. That’s what Chrissy tiegen did, it makes a drastic change to the face,” another mentioned.

“It’s just the right filter for her fillers. Farrah and Kail have it down too,” a final added.

Last month, fans claimed Chelsea Houska seemed “so different” in a throwback photo from her early days on MTV and they pleaded with her to “stop messing with her face.”

An image from 2011 of Chelsea was uploaded onto an online board.

In the snapshot, the former Teen Mom 2 star appeared exhausted as her daughter Aubree, who was a baby at the time, sat on her lap.

The 16 & Pregnant alum wore a plaid shirt as her dark reddish hair seemed unkept and wavy.

Chelsea had heavy eyeshadow as her lips appeared thin and her looks looked puffy.

Fans, who have become convinced the reality star has had several fillers and Botox over the years, commented on the Teen Mom star’s transformation.

One fan said: “She looks like a different person. Whoever did her Botox is sh*t at their job.”

Another fan added: “I realize she looks drastically different.

“Nearly every teen mom from the show has had work done, and the work she has had done is on the lower end of the extremes we see. Also, she was a different person then, in a toxic relationship.”

A third fan noted: ” Her face just looks thinner, and she has lost a lot of weight.”

A fourth person wrote: “I’m shocked every time I see her now. How does she have no one in her life willing to tell her to stop messing with her face??”

A fifth person chimed in: “I thought she was really pretty when she was younger and without all of the work done.”

52 mins ago
Planned Parenthood ‘expert’ claims ‘men can have pregnancies’

52 mins ago
Planned Parenthood ‘expert’ claims ‘men can have pregnancies’