TEEN Mom star Rachel Beaver has taken to Instagram to exhibit a new dramatic look that has fans talking.

In a TikTok that she recently posted to Instagram Rachel, 20, has two-toned hair, thick winged eyeliner and a black mini-star under each eye.

The young Teen Mom star isn’t new to being daring, at one point she had ombre pink hair.

However, Rachel’s latest look is the boldest because it appeared that she has mini-stars as a permanent part of her face.

The mother of one hasn’t confirmed or denied whether or not the mini-stars under her eyes are actual tattoos.

Rachel’s silence has some fans wondering if Rachel really did take her look up a notch with undereye tattoos. 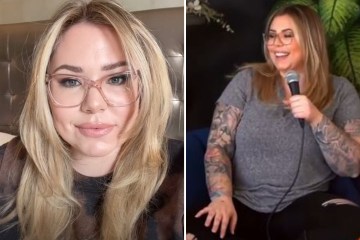 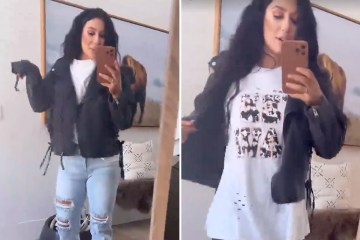 “Ummm did Rachel get face tats?,” one user asked on Reddit.

This year Rachel is wearing skimpier outfits and her hair half yellow blonde and half dark brown.

Rachel’s willingness to experiment with her style has gotten positive feedback from fans on Instagram.
“I love how ur not afraid to be different,” one person wrote.

Other fans complimented Rachel for her “gothic Lolita” style and insisted that she were their stylist.

“Dress me up queen lol I love your style,” one person wrote.

Despite the fan love, MTV viewers have also bashed the reality star recently after the Gen-Zer posted a raunchy TikTok with her mom, Stephanie.

Her mother, Stephanie, was also in the TikTok dancing behind her daughter in a t-shirt and sweatpants.

Stephanie then starts dancing by grabbing her breasts and then sticking her tongue out while making crazy faces.

Toward the end of the video, she thrusts her hips and moves them in a circular motion.

While her mother is making the video a giant joke, Rachel continued dancing and still tried to be cute.

Fans were quick to comment on the surprising cameo when the clip made its way to an online thread.

“Stephanie really added the cherry on top,” one person said.

Another commented: “… And to think that my kids think I am embarrassing – yikes! How does that grandma engage in such nonsense?”

Someone said: “My husband and I noticed her videos with her mom being silly get like double and triple the amount of likes, too.”

“She’s going to be so embarrassed by these in the future. I’m glad this s**t didn’t exist when I was younger,” one fan raged.

A different user wrote: “I think everyone one of these TikToks would be top posts on TikTok cringe.”

Despite the negative reaction, Rachel has not slowed down her social media feed and continues to post frequently on her Instagram and TikTok.