HORRIFYING images show a 9-foot sand tiger shark that washed up along the US coastline.

The sighting of the beast with “intimidating teeth” comes after at least six shark attacks were reported in the same area in weeks.

A man said he found the shark around 7am on July 28 in Longport, New Jersey.

He shared photos of the massive beast and said he called police, who brought in a truck to remove the giant shark.

“It was pretty easy to locate, considering it was huge,” the unidentified man told the Philly Voice.

“I just walked over and noticed that one side of the shark looked a bit more gruesome.” 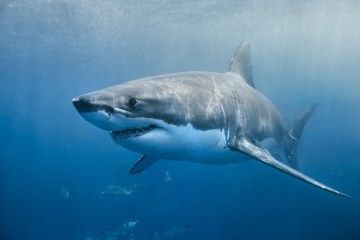 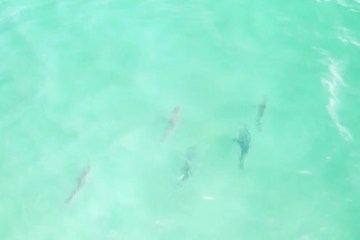 One of the photos obtained by the Voice shows the shark had a large gash across its belly, exposing its organs.

“There had to be about 20 birds eating some of the remains that were to the side of the shark,” the man said.

Several marine biologists told the Voice that the carcass was a sand tiger or grey nurse shark.

A spokesperson for the National Oceanic and Atmospheric Administration Fisheries said that these sharks are common in the northeastern United States, and New Jersey.

“They appear intimidating with their teeth, but are pretty docile sharks.

“In fact, they are a popular shark in aquariums given their fierce look, and because they do well in captivity.”

None of the shark attacks in the tri-state this summer have been fatal.

The first was on June 30, when a man in his 50s was bitten on the right foot while swimming in Jones Beach in Nassau County’s Long Island.

Shawn Donnelly, 41, was knocked off his surfboard when a sand tiger shark attacked off the coast of Smith Point Beach on July 13.

He was left with a four-inch gash wound to the leg.

Donnelly revealed that he punched the shark to fend off the beast.

He told NBC New York: “It got my left calf and knocked me off my board… when I was falling off my board, I saw the fin and its back.”

A 49-year-old tourist from Arizona was attacked by a shark at Seaview Beach on the same day.

Police said the “shark came up from behind and bit him on the left wrist and buttocks.”

John Mullins, 17, who was participating in lifeguard training, was attacked by a shark on July 7.

Lifeguard Zach Gallo, 33, was also bitten while he was doing training exercises at Smith Point Beach on July 3.

Last month, a great white shark carcass washed up on a beach in Quogue Village. It was 7- to 8-feet long.