As previewed earlier, analysts are expecting a revenue increase of 142% from a year ago and, with consensus calling for earnings per share of $2.27 from $17.92 billion in sales. That compares with earnings of $2.54 a share and sales of $17.7 billion in the fourth quarter of 2021. Automotive gross profit margin is expected to be about 28.5% and regulatory credit sales are expected to be about $312 million. Operating profit is estimated to be $2.6 billion. A summary of what to expect:

We already know actual the deliveries: recall, for Q1 2022 the company reported earlier this month a record 310,048 deliveries. The results slightly exceeded expectations, which stood at an average of 309,158 deliveries. Tesla said the record was “despite ongoing supply chain challenges and factory shutdowns”. 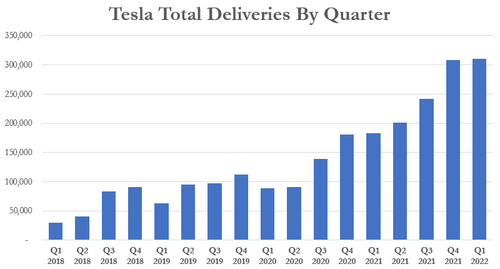 The share of Model S/X of total global vehicles continued to wane at 14,724 deliveries for the quarter. This represented 4.7% of all total deliveries. 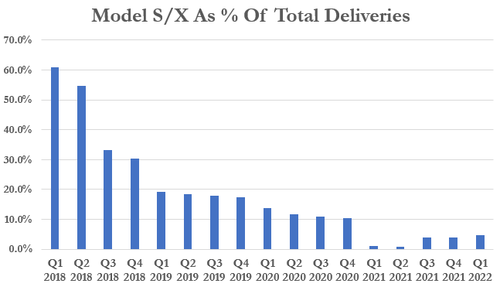 Model 3 deliveries dropped slightly from the prior quarter, as Model S/X took up slightly more of the company’s total deliveries. 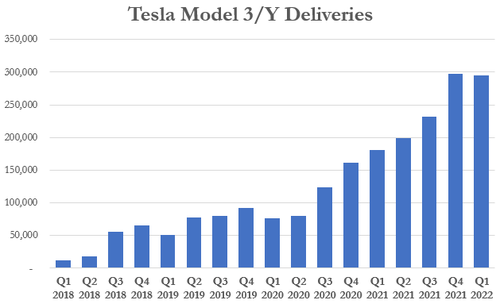 Cars and earnings aside, big question investors have is what is up with production at the Shanghai factory, and how the recent shutdown impacts the outlook for the current quarter and rest of the year?  Dan Levy of Credit Suisse estimates Tesla will lose 90,000 units of production in the second quarter, and has reduced his delivery forecast for 2022 to 1.42 million vehicles. A state media outlet in Shanghai reported Tuesday that about 8,000 workers have returned to Tesla’s Shanghai plant, which closed for about three weeks due to the Covid outbreak in the region. Tesla recently opened new factories near Berlin and Austin, Texas, but those will both take time to ramp up production, and China remains crucial to Tesla’s success.

Also of note, CEO Elon Musk will be on the call today, and since it is April 20, expect a lot of “420” references – both in the form of funding secured and marijuana (much more in our full preview).

And while most will be dissecting Tesla’s earnings and listening to the company’s call, it will be hard to ignore Elon Musk’s current push to buy Twitter. One of the top shareholder questions on the Say Technologies Q&A platform even indirectly references the bid: What is Elon’s long-term commitment to Tesla? Is he willing to sell Tesla stock to fund other ventures? One of the leading theories about how Musk might try to fund a Twitter acquisition is by selling or borrowing against his Tesla shares, which could affect the company’s stock price. If we hear about Twitter at all tonight, this will probably be why.

So what that in mind, here are the stellar numbers that Tesla just reported for Q4 moments ago: 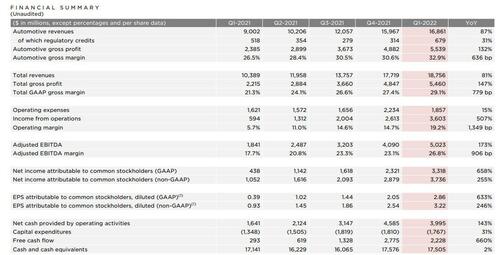 Of the numbers above, the sharp jump in the automotive gross margin perhaps sticks out the most; naturally, these are the result of the recent price increases used to offset supply chain headaches and materials inflation. Here’s the commentary on that:

Challenges around supply chain have remained persistent, and our team has been navigating through them for over a year. In addition to chip shortages, recent COVID-19 outbreaks have been weighing on our supply chain and factory operations. Furthermore, prices of some raw materials have increased multiple-fold in recent months. The inflationary impact on our cost structure has contributed to adjustments in our product pricing, despite a continued focus on reducing our manufacturing costs where possible.

Some more commentary and context:

While the company’s earnings clearly blew away expectations, one potential concern is the company’s warning that in Q1, it saw “a continuation of global supply chain, transportation, labor and other manufacturing challenges, limiting our ability to run our factories at full capacity.”

And just so investors are clearly aware that supply chains remain an issue, TSLA repeated that it “plans to grow our manufacturing capacity as quickly as possible” and while “over a multi-year horizon, we expect to achieve 50% average annual growth in vehicle deliveries”, the rate of growth “will depend on our equipment capacity, operational efficiency and the capacity and stability of the supply chain. Our own factories have been running below capacity for several quarters as supply chain became the main limiting factor, which is likely to continue through the rest of 2022.“ 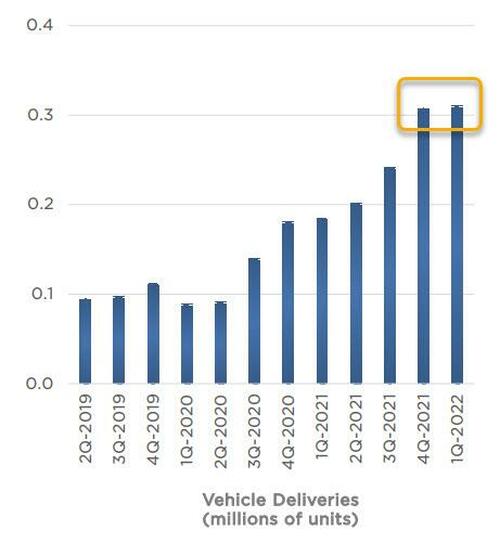 So yes, regulatory credit sales improved, but so did actual sales, higher retail prices and reduced costs (despite inflation).

Going back to more pressing matters at hand, this is what the company had to say about China:

“While weekly production rates were strong in Q1, a spike in Covid-19 cases in Shanghai resulted in the temporary shutdown of our factory as well as parts of our supply chain. Although limited production has recently restarted, we continue to monitor the situation closely.”

The company also addressed the touchy situation with the autopilot, saying that “FSD Beta development continued with seven software updates in 2022. Our team continued to work on reducing disengagements, particularly focusing on unprotected left turns and smoothness of the ride through reduction of slowdown events. We are aiming to release FSD Beta to all U.S. FSD customers before the end of this year. Initial release of FSD Beta to some customers in Canada started in March 2022.”

Some more good news thanks to Biden raising fuel economy and emissions standards which will benefit Tesla:

Under the updated regulations, carmakers will be required to raise the average fuel efficiency of their fleets by 8% annually for the 2024 and 2025 model years, and 10% for 2026. By the 2026 model year, the average will have to be 49 mpg under the agency’s testing regime, though actual results for motorists will likely be closer to 39 or 40 mpg.

While Tesla the car company rocked, Tesla the solar company had another lousy quarter, with just 48 megawatts, down 48% from 1Q 2021. It says the reduction was “caused by import delays beyond our control on certain solar components.”

On the liquidity front there were no concerns, and the company said that quarter-end cash equivalents and short-term  marketable securities increased sequentially by $0.3B to $18.0B in Q1, driven mainly by free cash flow of $2.2B, partially offset by debt repayments of $2.1B. Yes, the company continues to chip away at its debt load. Exiting Q1, Tesla says its carrying less than $100 million in debt excluding financing for its vehicle and energy products. Total debt excluding vehicle and energy product financing fell to less than $0.1B at the end of Q1.

Looking ahead, the company said that “while we continue to execute on innovations to reduce the cost of manufacturing and operations, over time, we expect our hardware-related profits to be accompanied with an acceleration of software-related profits.”

Investors are clearly liking the results for now, and is back over $1000, up 4% after hours and unchanged on the day. 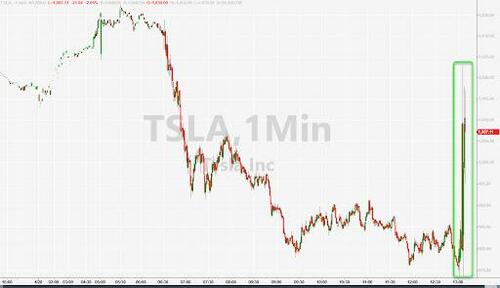 If these gains hold tomorrow in regular trading, Bloomberg notes that would be their biggest post-results jump since January 2020.