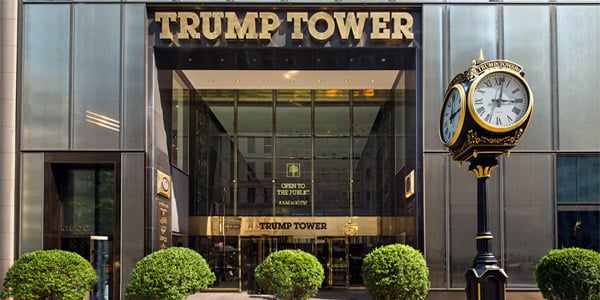 Note: This is the first of a two-part column. Look for Part 2 tomorrow.

The Feast of Trumpets in September 2015 marked the beginning of the first seven-year Shemitah cycle of the first officially designated Jubilee year since the Roman expulsion of the Jews from the Holy Land in A.D. 135. The 2015/16 time period was retroactively designated the Jubilee year by the newly reconstituted Jewish Sanhedrin, based upon its calculation that a majority of the world’s living Jews had returned to the Holy Land: the prerequisite for that all-important holiday to be officially observed.

2015 also marked the emergence of strongly pro-Israel Donald Trump as a “deliverer” figure in the mode of the judges of the Israelite Republic. Shortly after the fall feasts pilgrimage period ended in early October 2015, Trump became the front-runner in the crowded Republican presidential field and from that point became an unstoppable political force.

In November of 2016, Donald Trump shocked the world by beating the Jezebel/Astarte figure Hillary Clinton, who had been intended by the Satanic elites to finish the work begun by the Israel-hating Barack Obama. The one-world globalist train, packed with human beings destined for slavery and death, was in sight of the final station when Trump derailed it.

What then ensued was an all-hands-on-deck war on Trump, politically equivalent to the siege of Masada by the Romans or, perhaps more accurately the last-days siege of Jerusalem by the armies of the wicked. Why? Because Trump defied all the principalities and powers of the wicked by formally recognizing Jerusalem as the capital of Israel and moving the U.S. Embassy there. The spiritual and prophetic importance of that move cannot be overstated and far out-shadows all of his other pro-Israel initiatives, including the Abraham Accords. The Jews minted an enormously significant half-shekel temple-offering coin to honor him for that, equating Trump with the Persian Emperor Cyrus venerated in the Bible and lionized by the Jews as “Cyrus the Messiah” for conquering Babylon and liberating them from captivity.

It is important here to clarify the meaning of “deliverer” or “messiah” in the context of the Israelite Republic as showcased in the books of Joshua and Judges. None of Israel’s many judges was perfect like Jesus Christ was – they were all, like Trump, flawed mortals who fell far short of Christ, as the Bible documents in unflattering detail.

That context is critical, because America IS the last-days reiteration of the Israelite Republic, right down to its 400-year lifespan, which can be measured from its birth with the Mayflower Compact of November 1620, to its death in November of 2020. In this reiteration Donald Trump plays the role of the last judge, Samuel, who did his best to stop the people from trading in their republic for a monarchy. And if Trump is Samuel, Biden is Saul, the demon-possessed first king defined by increasing mental instability.

And if Biden is Saul, there is waiting in the wings a David figure – but a False David who will look to the world like a true deliverer, showing many signs and wonders to persuade the people he is their savior, but in reality being the Antichrist who will finally be revealed in God’s perfect timing.

The False David is the rider of the white horse, bearing the rainbow, the symbol of God’s presence and authority, and he will likely declare a false Jubilee just as the true Messiah, Jesus Christ, declared a true Jubilee at the start of His ministry in Luke 4:14-20.

The world will be desperately clamoring for such a deliverance then because it will be in the depths of the Great Collapse. And the False David will oblige by launching the Great Reset with a global debt jubilee and new economic/financial order.

Since Jan. 7, 2021, I have been offering this perspective and refining my analysis as events have made the prophesies increasingly less murky. The culture warrior side of me has argued that yes, our republic definitely ended with the November 2020 elections, but enough of our infrastructure remained that Americans could still claw back control in the 2022 elections. I argued that the window of reprieve Donald Trump had won for us in 2016 was closing but still open enough to reclaim our birthright that the founders had bequeathed to us. The pastor/teacher/prophet side of me knew this optimism was probably misplaced, but that there was enough ambiguity in the prophecies to keep hope alive.

That window is now closed. I thought they’d need to use World War III or a domestic false flag on the scale of 9/11 to pull it off, but in the end all they needed to do was tweak their election fraud and ballot-harvesting methods. They already had the comprehensive lists of “voters” to harvest, and the hidden infrastructure for padding the ballot counts as needed thanks to the 2020 Zuckerbucks conspiracy, so it was probably easier to pull off this time, despite the heightened public scrutiny.

2022/23 is the first year of the current Shemitah cycle. The battle of good and evil in our land is by no means over, but the forces of evil largely defeated our 2022 counter-offensive, leaving us only a narrow beachhead in the House of Representatives. There is really nothing to stop them now from continuing their consolidation of power and transition to a “monarchy” under the Antichrist, whomever that might be. Indeed, with the threat of overthrow now neutralized, I expect they will rapidly escalate their roll-out of a draconian police-state and begin persecuting, canceling and J6ing all those pesky MAGA leaders, using all the resources at their command, including the 87K new militarized IRS agents, a reinvigorated “public health” enforcement regime, and a cashless/social credit merit and punishment system led by Big Tech, Big Business and the Banksters.

The red horse of WWIII seems almost certain to appear soon, ensuring that famine, pestilence and a deep culling of the “surplus population” will follow in their turn.

They will, of course, need to end the conservative majority on the Supreme Court and put the presumed Dobbs-case leaker, John Roberts, back into the swing-voter seat. I woke up this morning with the concern that they might do to Clarence Thomas what many of us believe Obama’s goons did to Justice Scalia. (God save him from that fate!)

And yet, even if all these speculations are prophetic, our job remains the same: Occupy until He comes, gather the lost into the heaven-bound lifeboats, and keep fighting the enemy with all we’ve got to slow them down and maximize the reach and effectiveness of our evangelism and discipleship while that window remains open. So lift up your heads in holy anticipation, because beyond this dark night is the dawn of Christ’s own kingdom.