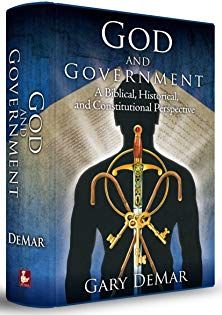 The following article, The Apostle Paul and the Lesser of Two Evils, was first published on The American Vision.

Christians are still bringing up “I can’t vote for the lesser of two evils” argument while they are pontificating on this point while posting on Facebook that promotes the twin evils of abortion and homosexuality and is manipulating the political process. This side of heaven, there is no way to avoid evil. You would have to join Joe Biden in his basement, but then you would be with evil Joe. How about sitting on a pole somewhere? Even this would not remove you from the lesser of two evils because you would be there with yourself.

Simeon Stylites achieved notability for living 37 years on a small platform on top of a pillar. He might have thought he was escaping the world’s evil, but he only took his own evil with him, and the evil below him remained, and because he took himself out of the game, he did nothing to fix anything. We can’t change the world by escaping it or sitting on the side while greater evil advances. God works in and through us in this world, including all its evil. Everything is tainted by evil.

The 2020 election is between two worldviews, not only two presidential candidates. There are 535 members of Congress who have a big say in all things. The majority party sets the agenda. A President who is of the minority party can veto the majority party’s legislation requiring a super majority to override the veto. Then there are the hundreds of judges who serve long after a president’s term or terms. Let’s not forget the bureaucrats and alphabet soup agencies that comprise the Deep State.

Many who oppose abortion won’t vote for Trump because he has not stopped abortion. The President is not a legislator. Neither is the Supreme Court, even though it acts as one. I don’t recall him promoting abortion. Biden-Harris and the Democrats do promote abortion, including taxpayer funded abortion. Let’s get real for a moment. The SCOTUS is not going to outlaw abortion. It might turn it over to the states. Abortion will stop when there is a ground swell opposition to it. This must begin with the household of God (1 Pet. 4:17). So far, it hasn’t.

Back in print! Government is not synonymous with politics. Societies are not changed from the top; they are changed from the bottom, at the foundational level by acknowledging that God is the true Governor of all things. By acknowledging His sovereignty and keeping His commandments in every area of life, civilizations flourish. This 30-chapter hardback book includes carefully selected corresponding images, extensive subject and Scripture index, verified quotations and extensive bibliography. Great for homeschooling families.

Trump’s accomplishments have been massive compared to what Hillary would have done and Biden-Harris will do if they are elected. Biden is a stand-in for more radical elements.

None of this seems to trouble those who claim they can only vote for a perfect candidate. They sit on their pious poles and condemn everyone who does not erect their own pious poles of irrelevancy. Some of these never-Trumpers are running for President when they couldn’t be elected as the local animal control officer.

Was the Apostle Paul wrong for choosing the lesser of two evils? There were two judicial powers operating for Paul who was a Jew from Tarsus in Cilicia (Acts 21:39) and a Roman citizen (16:37–38; 22:25–29). One would think that a Jewish judiciary would be the most just for a Jew since it required the testimony of at least two eyewitnesses (Deut. 19:15) and condemned perjury (Ex. 20:16; 23:1; Prov. 19:9), but in practice it wasn’t. We see from the trials of Jesus that those who opposed Him relied on the testimony of false witnesses.

Now the chief priests and the whole Council kept trying to obtain false testimony against Jesus, so that they might put Him to death. They did not find any, even though many false witnesses came forward. But later, two came forward, and said, “This man stated, ‘I am able to destroy the temple of God and to rebuild it in three days’” (Matt. 26:59–61).

The purpose of these false witnesses was to bring political charges against Jesus so the Roman governor Pontius Pilate would have reason to execute Jesus as a revolutionary who was hell-bent on overthrowing the Roman government by force.

Then the whole body of [the Jewish Council of elders] got up and brought Him before Pilate. And they began to accuse Him, saying, “We found this man misleading our nation and forbidding to pay taxes to Caesar, and saying that He Himself is Christ, a King” (Luke 23:1–2).

The lifeblood of any empire is submission of the masses and taxation. Insurrections are always put down, especially when someone claims to be a king. This same charge was brought against the Apostle Paul and his associates:

So [the Jews] brought in some troublemakers from the marketplace, formed a mob, and sent the city into an uproar. They raided Jason’s house in search of Paul and Silas, hoping to bring them out to the people. But when they could not find them, they dragged Jason and some other brothers before the city officials, shouting, “These men who have turned the world [οἰκουμένην/oikoumenēn] [1] upside down have now come here, and Jason has welcomed them into his home. They are all defying Caesar’s decrees, saying that there is another king, named Jesus!” (Acts 17:5–7).

The Romans were not without their brand of political evil. Let’s not forget that it was the Romans who put Jesus to death and physically abused him. In the 16th chapter of Acts, the Romans beat Silas and Paul and imprisoned them, and Paul condemned the Roman civil officials for their actions:

When daylight came, the magistrates sent their officers with the order: “Release those men.” The jailer informed Paul: “The magistrates have sent orders to release you. Now you may go on your way in peace.” But Paul said to the officers, “They beat us publicly without a trial and threw us into prison, even though we are Roman citizens. And now do they want to send us away secretly? Absolutely not! Let them come themselves and escort us out!” So the officers relayed this message to the magistrates, who were alarmed to hear that Paul and Silas were Roman citizens. They came to appease them and led them out, requesting that they leave the city (16:35–39).

The main reason anti-Christian civilizationists survive and seem to thrive is that Christians have not engaged with, answered, and built a competing alternative culture—THE ORIGINAL CIVILIZATION—founded on the principles of God’s Word and observable in creation. Moreover, many Christians don’t believe there can be or should be a Christian civilization, so they send their children off to the local government school that is anti-Christian believing that facts are neutral and public education is free. Such thinking comes at a terrible cost. Restoring the Foundation of Civilization is a handbook for rebuilding from the ground up.

Which would be your choice? The Jewish Council of Elders or the Roman Empire and Caesar? The “no-lesser-of-two-evils” crowd would have to say “neither.” They are both evil. And this would be a correct assessment. Even so, Paul appealed to Rome because the Jewish Council of Elders and Jewish plotters against Paul and the gospel were the greater evil (20:3, 19). He described the High Priest as a “white-washed wall” (23:3) because he was violating God’s law. Paul was willing to die if it came to it (21:7–14), but not before doing what he could to buy time for the spread of the gospel.

The Jewish plotters were intent on murdering Paul (23:12–22). To whom did the supporters of Paul go for relief? The Roman government. Paul declared, “I appeal to Caesar” (25:11). Paul chose the Roman Empire — “Caesar’s tribunal” (25:10) — over the Jewish Council of Elders. He did not sit on the sidelines and decry and dismiss the two choices before him. He took advantage of the lesser of two evils. As a result, he had an impact on “Caesar’s household” (Phil. 4:22).

[C]hiefly they that are of Caesar’s household; for by means of the apostle’s bonds, which were made manifest in the emperor’s palace, Christ was made known to some there likewise; though Nero, the then reigning emperor, was a very wicked prince, and his court a very debauched one, yet the grace of God reached some there….”

Donald Trump is no Nero. It seems that Christians have had an impact on the President. He now identifies as a “non-denominational Christian,” having left the very liberal branch of the Presbyterian church in which he was raised. Instead of criticizing him from the outside, it would have been better to become a part of “Trump’s household” to offer guidance and direction on specific issues. I know of some very fine Christians who work personally with the President.

A Trump win on November 3rd should buy us time. It’s of little value, however, if Christians believe that defeating Joe Biden and the Democrats wins the war. Democrats never quit. History has taught us that Christians have little stomach for a long-term ideological war. Many don’t believe impacting the world is a Christian obligation. They are content to win a battle here and there so it’s safe to send their children to the “free” government indoctrination centers called “public schools.”

Many Christians believe that are days are numbered because we are living in the last days. For example, I received the following email promoting the book The Military Guide to Armageddon:

We are a group of believers in Jesus Christ who believe that it is time to prepare the Church for the end times and return of the Lord by being ready to battle the forces of darkness in our lost world.

If you are looking for an antitode to last-days mania, then Wars and Rumors of Wars is the place to start. It’s a verse-by-verse study of the Olivet Discourse found in Matthew 24. For hundreds of years “prophecy experts” have been making dogmatic claims about the when of the last days. Wars and Rumors of Wars shows where they have gone wrong. The Bible is the best interpreter of itself, not the daily newspaper or internet posts.

If “the end times and the return of the Lord” are near, why bother working for social, moral, cultural, and political change? Where’s the long-term strategy? There isn’t one. If there isn’t a long game, you might as well sit around and wait for the rapture. The thing of it is, there is no “rapture.” The sooner Christians learn this truth, the sooner they will wake up to the job at hand.

There are also political rapturists who are waiting for a perfect political candidate who’s never going to show up so they are always disappointed and irrelevant.

Continue reading The Apostle Paul and the Lesser of Two Evils …