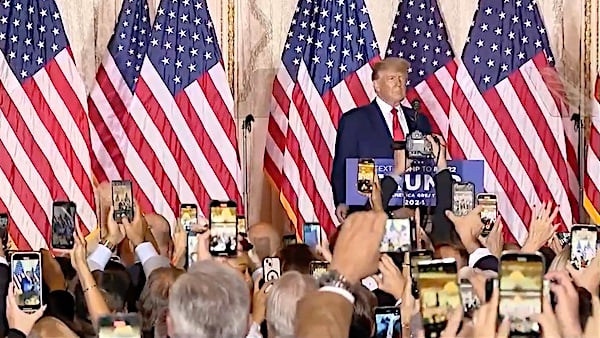 I’m going to “reverse gaslight” you. What does that mean?

Well, “gaslighting” is when government bureaucrats, politicians, media, corporations and all the evil people in power lie to you; defraud you; smother you with propaganda; brainwash you; and try to convince you that what you see right in front of you – with your own two eyes – is not true. That the lies they tell you are more important than the raw truth you can see right in front of you.

In my last column about the obviously rigged 2022 midterms, I listed many ways and times I believe you’ve been gaslighted in just the past few years. It’s a stunning list.

You’ve been the victims of nonstop severe gaslighting for a decade now. You’re all part of a human psychology experiment in the limits that government and media can go in propaganda and brainwashing … while you can see they’re lying right in front of your eyes.

And these are the exact same people now telling you how terrible former President Donald Trump is; how awful of a human being he is; what a criminal he is; what a danger to you, your family and America he is … how unpopular he is … and how he must be stopped at all costs.

Everyone in power and media is telling you this. Not just liberal media like CNN, MSNBC, The New York Times and The Washington Post. But also, conservative media like Fox News, the Wall Street Journal and New York Post – all owned by the Murdoch family.

Trump just declared he is officially running for president again in 2024. And all hell has broken loose. Everyone in power, on the left and right and even the Murdoch family have all gone postal.

Trump is like kryptonite to the D.C. swamp, deep state, globalists, RINOS, Democrats and the CEOs of the biggest corporations in the world. Trump is the one man standing in front of their plans to force-vaccinate us to death; regulate us to death; tax us to death; digital ID us to control every aspect of our lives; move to a cashless society where every dollar you make is tracked; and worst of all, force us into a social credit score system that will make it impossible to travel, open a bank account, get a loan or keep your job if you disagree with the government’s lies, misinformation and propaganda.

Trump can stop us from becoming medical experiments. Yes, Trump the man who supports the experimental COVID-19 vaccines (mistakenly, in my opinion) is the one person who can keep us safe from them. Because he believes in freedom. He will never allow vaccine mandates on anyone – not children, not government employees, not military, not private sector employees. You know how many hundreds of billions of dollars that will cost Big Pharma?

So even though Trump supports the vaccine, Big Pharma hates him and needs to stop him.

And Trump is the one man who can stop China and the Chinese Communist Party. That’s why they hate him so much.

On Friday criminally obsessed and insane Attorney General Merrick Garland ordered a special counsel to investigate Trump. The powers that be will stop at nothing to destroy this man.

Keep in mind Trump created the greatest economy and stock market in modern history. He made all these people at the top filthy rich. They doubled and tripled and quadrupled their wealth under Trump. They should love him. Yet they all hate him. Why?

Have you forgotten all this? I’m here to remind you. The American people love Trump. The evil people in power hate Trump. Now they’re gaslighting you. They want you to forget all that.

Trump is our only choice. Why? Because the people in power hate him so much. Because they are all united to stop him. Because they’re so desperate. Because they’re frothing at the mouth – against Trump and only Trump. No one else seems to bother them or scare them. That tells you all you need to know.

That’s the tipoff. That’s why there is no other choice. “We the people” have to unite to elect Donald J. Trump as the 47th president of the United States.