Through a comment on Facebook, I learned that Ed Dingess posted a 45-minute critique of a message that James White gave on the topic of postmillennialism that served as a response to a sermon that John MacArthur gave. You can listen to the Dingess’ “rant” (as he calls it) titled “James White’s New Dance with Postmillennialism” here. I’m not going to offer a response to it. James White is more than capable to answer his critics. What I found interesting was this introduction to the Dingess presentation:

In this episode, I rant about James White’s criticisms of John MacArthur’s premillennial views on how the end-times will proceed from bad to worse. The postmil guys all ignore Jesus’ comparison of the days of Noah with His return. That said, I do not offer a critique of postmillennialism, a view that I consider the weakest of the eschatological schemes.

Not all “postmil guys … ignore Jesus’ comparison of the days of Noah with His return.” I’ve written about it in several places, including my book Last Days Madness (195–198). My take on it differs from some of my postmil friends who also have commented on it. Postmillennialist J. Marcellus Kik commented on it in his 1948 book Matthew 24. I disagree with Kik’s and Ken Gentry’s interpretation of the transition text of Matthew 24:35 regarding the meaning of “heaven and earth” passing away. For a comprehensive study of the topic, see the article written by David Chilton and me titled “What Does Peter Mean by the Passing Away of Heaven and Earth? A Study of 2 Peter 3?” The Days of Vengeance

From the very beginning, cranks and crackpots have attempted to use Revelation to advocate some new twist on the Chicken Little Doctrine: ‘The Sky is Falling!’ But, as David Chilton shows in this careful, detailed exposition, St. John's Apocalypse teaches instead that Christians will overcome all opposition through the work of Jesus Christ.

The following is my take on the Days of Noah.

To help Jesus’ listeners better understand the timing and circumstances of the events leading up to and including the destruction of the temple before their generation passed away (Matt. 24:34), He draws on a familiar Old Testament judgment event—the flood. Jesus, teaching by analogy, shows how the coming of the floodwaters and His coming in judgment in that generation are similar. In Noah’s time, we read about “those days which were before the flood” and “the day that NOAH ENTERED THE ARK” (Matt. 24:38). Similarly, there were days before the coming of the Son of Man and the day of the coming of the Son of Man. The same people were involved in both the “days before” and “the day of” the Son of Man. Those who “were eating and drinking” and “marrying and giving in marriage” were the same people who were shut out on “the day that Noah entered the ark.” Noah entered the ark on a single day similar to the way Jesus as the Son of Man came on the “clouds of heaven with power and great glory” (24:30), a day and hour known only to the Father (24:36). “Some shall be rescued from the destruction of Jerusalem, like Lot out of the burning of Sodom: while others, no ways perhaps different in outward circumstances, shall be left to perish in it.” (Thomas Newton, Dissertations on the Prophecies, Which Have Remarkably Been Fulfilled, and at This Time are Fulfilling in the World (London: J.F. Dove, 1754), 379.) Jesus issued escape from a Sodom-like warning in Matthew 24:16–20.

Jesus says that His coming “will be just like the days of Noah” (24:37). The “coming” mentioned in 24:37 is the same coming in judgment that Jesus mentioned earlier in the chapter that took place before their generation passed away. The people were doing normal things in the lead up to the destruction of the temple—“eating and drinking” and “marrying and giving in marriage.” Jesus is telling His audience that life would be going on as usual when Jesus returned in judgment against the temple and Jerusalem.

Jesus is not describing evil behavior like drunkenness and sexual sins like “‘exchanging mates’ or ‘wife swapping,’ contrary to what M. R. DeHaan and Jack Van Impe claim. (Jack Van Impe, The Great Escape: Preparing for the Rapture, the Next Event on God’s Prophetic Clock (Nashville, TN: Word, 1998), 127.) “Marrying and given in marriage” is a phrase to describe, well, “marrying and giving in marriage” (see Matt. 22:30). Families do it every day. Men and women marry and parents give their daughters away in marriage. D. A. Carson’s comments are helpful:

[T]hat the coming of the Son of Man takes place at an unknown time can only be true if in fact life seems to be going on pretty much as usual—just as in the days before the flood (v. 37). People follow their ordinary pursuits (v. 38). Despite the distress, persecutions, and upheavals (vv. 4–28), life goes on: people eat, drink, and marry. There is no overt typological usage of the Flood as judgment here, nor any mention of the sin of that generation. (D. A. Carson, “Matthew,” The Expositor’s Bible Commentary, gen. ed., Frank E. Gaebelein (Grand Rapids, MI: Zondervan, 1984), 8:509. Also see N. T. Wright, Jesus and the Victory of God (Minneapolis, MN: Fortress Press, 1996), 365–366.)

Support for Carson’s interpretation can be found in Luke’s account of the time just before Sodom’s destruction: “It was the same as happened in the days of Lot: they were eating, they were drinking, they were buying, they were selling, they were planting, they were building; but on the day that Lot went out from Sodom it rained fire and brimstone from heaven and destroyed them all” (Luke 17:28). Buying, selling, planting, and building describe life going on as usual without any regard to an impending judgment. Is Dingess willing to say that these activities “connote moral corruption”? Darrell L. Bock attempts this interpretation even though he admits that the idea of “moral corruption … is not emphasized in Luke’s description.” (Darrell L. Bock, Luke: Baker Exegetical Commentary on the New Testament, 2 vols. (Grand Rapids, MI: Baker Books, 1996), 2:1432–1433.) No one disputes that Noah and Lot lived in times of moral corruption that brought judgment. Jesus’ point, however, is that the people in Noah and Lot’s day went on with their lives as if the promise of imminent judgment was a lie (see 2 Peter 3:3–4). The same is true of those who were told that Jesus would return in judgment within a generation.

Many futurists claim that the phrase “took them all away” (24:39) refers to a rapture that is still in our future. On the contrary. “In the context of 24:37–39, ‘taken’ presumably means ‘taken to judgment’ (cf. Jer. 6:11 NASB, NRSV).” (Craig S. Keener, The IVP Bible Background Commentary: New Testament (Downers Grove, IL: InterVarsity Press, 1993), 115.) The phrase ties the judgment of the world in Noah’s day with the judgment of the Jews’ world in Israel’s day that took place with the destruction of the city of Jerusalem and the temple. Who was taken away in the judgment of the flood? Not Noah and his family. They were left behind to carry on God’s work. John Gill writes in his commentary on this passage: “the whole world of the ungodly, every man, woman, and child, except eight persons only; Noah and his wife, and his three sons and their wives….” were taken away in judgment. And what does Gill say about those in the field?: They shall be taken away “by the eagles, the Roman army, and either killed or carried captive by them.” The Bible gives its own commentary on the meaning of “took them all away” in Luke 17:27, 29: “Destroyed them all” is equivalent to “took them all away.” Consider the meaning that dispensationalist John Walvoord gives to “took them away.”

Here both Gundry and Reese violate the rule that the context should determine the interpretation of a passage. Both Gundry and Reese concede that the context deals with judgment such as characterized the time of Noah. According to Matthew 24:39 those living at that time “knew not until the flood came, and took them all away, so shall also the coming of the Son of Man be.” Those taken away were taken away in judgment.

Claiming that those taken in verses 40 and 41 are taken away in the rapture, Gundry in discussing the parallel passage in Luke 17:34–37, ignores verse 37. There two are pictured in the same bed, with one taken and the other left. Two are grinding together, and one is taken and the other left. Two are in the field, one is taken and the other left. Then, in verse 37, the question is asked, “Where, Lord?” The answer is very dramatic: “And He said unto them, Wherever the body is, there will the eagles be gathered together.” It should be very clear that the ones taken are put to death and their bodies are consumed by the vultures. If the ones taken are killed, then verses 40, 41 of Matthew 24 speak of precisely the same kind of judgment as occurred in the flood where the ones taken were taken in judgment. (John F. Walvoord, The Blessed Hope and the Tribulation: A Historical and Biblical Study of Posttribulationism (Grand Rapids, MI: Zondervan, 1976), 89, 90. Walvoord writes in another place: “Because at the rapture believers will be taken out of the world, some have confused this with the rapture of the church. Here, however, the situation is the reverse. The one who is left, is left to enter the kingdom; the one who is taken, is taken in judgment.” John F. Walvoord, Matthew: Thy Kingdom Come (Chicago, IL: Moody Press, 1974), 193.)

But like Reese and Gundry, Walvoord ignores the time texts that run throughout Matthew 24–25, claiming that they refer to a distant coming of Christ as does Dingess. Since there was a judgment where Jews were “taken away in judgment,” it makes more sense to place the timing of such an event to the closest prophecy of judgment, Jerusalem’s destruction in AD 70.

Luke 17:22–37 describes five Olivet-Discourse prophetic events that are identical to those found in Matthew 24. The difference between Matthew 24 and Luke 17 is in the order of the events, a characteristic of the passages that few commentators can explain. Ray Summers writes:

This is a most difficult passage. The overall reference appears to be to the coming of the Son of Man—Christ—in judgment at the end of the age. Some small parts of it, however, are repeated in Luke 21 in reference to the destruction of Jerusalem (A.D. 70), and larger parts of it are in Matthew 24, also in reference to the destruction of Jerusalem. The entire complex cautions one against dogmatism in interpreting. (Ray Summers, Commentary on Luke: Jesus, the Universal Savior (Waco, TX: Word Books, 1972), 202.) 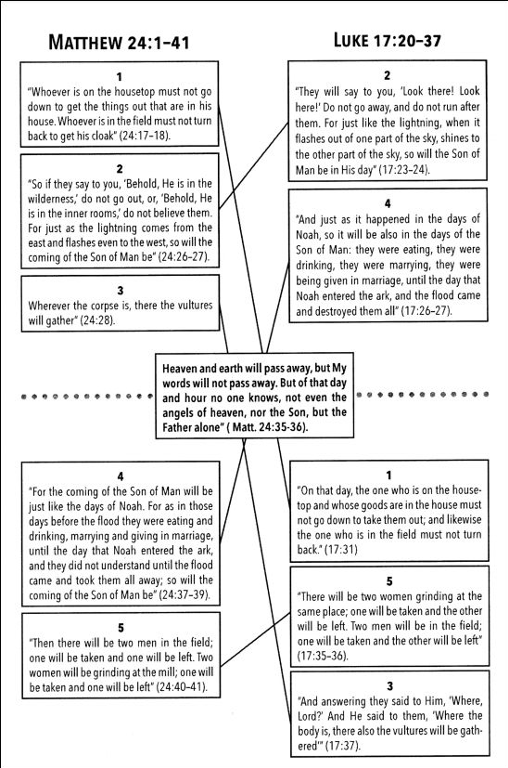 After A Long Time

Another line of evidence offered by those who believe that events following Matthew 24:34 refer to the personal and physical return of Jesus is the meaning given to “after a long time” (24:48; 25:19) and the “delay” by the bridegroom (25:5). On the surface, these examples seem to indicate that two different events are in view, one near (the destruction of Jerusalem) and one distant (the second coming of Christ).

The delay of the bridegroom is no different from the “long time” of the two previous parables. The bridegroom returns to the same two groups of virgins (Matt. 25:1–13). The duration of the delay must be measured by the audience.

In this book, Gary DeMar tests your views and renews your zeal for the living truth. This is the most thoroughly documented and comprehensive study of Bible prophecy ever written! Last Days Madness will be your survival guide and spiritual compass to ensure you escape the paralysis of last days madness.