The Democratic Case Against The Biden Nominee: Will Republicans Apply The “Barrett Rule”?

Below is my column in the Hill on  the expected fight over the Supreme Court seat to be vacated by Justice Stephen Breyer. The Democrats are calling for a confirmation process strikingly different from their own approach in the last three Supreme Court nominations. 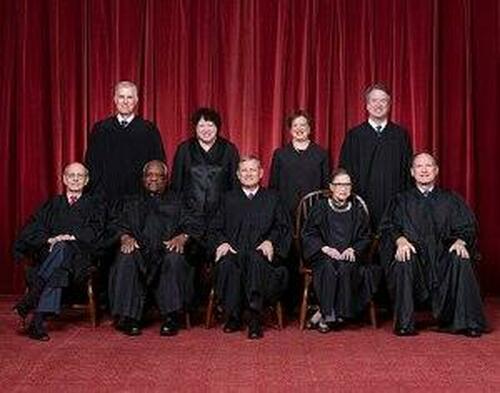 Here is the column:

As the White House vets “short-listers” to replace Supreme Court Justice Stephen Breyer, Sen. Mazie Hirono (D-Hawaii) has reminded Senate Republicans that they really need to be “open-minded” about the choice. It was an ironic statement from a senator who told all men to “shut up” during the Brett Kavanaugh confirmation and rejected any notion of that nominee being entitled to a presumption of innocence.

Hirono’s comment highlights today’s uncertainty over what exactly the Senate should “mind” in a confirmation. Hirono and the White House may be most worried that their eventual nominee will face the standards applied to the three nominees during the Trump administration.

Being a short lister is no easy task, but the president appears intent on making it more precarious by the day. Biden said last week that he would fulfill his controversial pledge to consider only black female candidates, a threshold racial and gender test that is opposed by the vast majority of the public and will continue to cloud the selection. Biden then added another prerequisite: Any nominee must embrace a liberal view of the Constitution on “unenumerated rights.” Thus, the president seems to be drawing incoming fire on his own nominee’s position — a position less than impregnable following the stroke of Sen. Ray Luján (D-N.M.).

Biden has maintained that his nominee must apply a liberal interpretation to the Constitution. On one level, this is hardly surprising; presidents are allowed to pick nominees who reflect their jurisprudential views. Of course, the required expansive view of rights demanded by Biden does not include disfavored rights like parental rights on abortions or educational information, gun rights or states’ rights. Those rights are to be narrowly interpreted. In the prior three court confirmations, Democratic senators maintained they would oppose a nominee who followed a conservative view of constitutional interpretation.

In the case of Amy Coney Barrett’s nomination, Sen. Angus King Jr. (I-Maine) wrote in The Atlantic that he would only vote for a nominee who expressly favored an “appropriate application of the terms of the Constitution to particular cases.” Sen. Dick Durbin (D-Ill.), the Democratic whip, declared that his opposition to Barrett was based on her interpretive approach that would work “against change and evolution in America that is inevitable and in fact necessary.”

Under this approach, Republicans would not have to be “open-minded” about a Biden nominee who follows an expansive view of constitutional interpretation. This includes support for a “living Constitution” approach that allows courts to “update” the Constitution without the necessity of constitutional amendments. Biden reaffirmed that view in discussing his expected nominee’s acceptance that “the Constitution is always evolving slightly in terms of additional rights or curtailing rights.” Indeed, adhering to the living-Constitution theory may be the only pro-life position tolerated in a Biden nominee.

Virtually all of the nominees on Biden’s rumored short list run from the left to the far left of constitutional interpretation. Yet one favorite is South Carolina District Court Judge J. Michelle Childs, who holds the critical support of Biden ally Rep. James Clyburn (D-S.C.); Childs answered “no” when asked by Sen. Dianne Feinstein (D-Calif.), during a previous confirmation hearing, if she would adhere to a living-Constitution view.

The more fluid interpretative approach demanded by Biden can entail limiting some rights while elevating others. For example, California Justice Leondra Kruger adopted a breathtaking view of the religion clauses. While working in the Obama Justice Department, she argued Hosanna-Tabor Evangelical Lutheran Church and School v. EEOC, a case involving a claim that religious schools should be able to require adherence to their central religious values. Kruger clearly shocked the High Court with a categorical denial of religious freedom in such choices. That led even Justice Elena Kagan to balk and ask, “Do you believe, Ms. Kruger, that a church has a right that is grounded in the Free Exercise Clause and/or the Establishment Clause to institutional autonomy with respect to its employees?” Kruger replied: “We do not see that line of church autonomy principles in the Religion Clause jurisprudence as such.” The court unanimously rejected her position and supported the church.

During the three Trump court nominations, Democrats shocked some observers by demanding an assurance on how justices would vote on pending cases. That was particularly the case with Barrett, who was confronted with demands that she pledge under oath to preserve Roe v. Wade or ObamaCare. I warned at the time that Democrats were creating a “Barrett rule” that could be used against their own nominees in the future.

With a pending challenge to the Affordable Care Act (ACA), Democrats pummeled Barrett with accusations that she was nominated to kill health care and filled the hearing room with photos of people who allegedly would die if she was confirmed. At the time, some of us noted that Barrett was more likely to vote to preserve the ACA and that the senators were radically misconstruing the pending case. (Barrett ultimately voted to preserve the Act, though not one of the Democratic senators apologized for their treatment of her.)

For some of Biden’s potential short-listers, such assurances have already been given on current appeals like challenged election reforms. Many commentators (like the editors of the Baltimore Sun) are pushing the nomination of the outgoing head of the NAACP Legal Defense and Educational Fund, Sherrilyn Ifill. Ifill declared that state election reforms requiring such things as voter identification are an effort “to subvert our democracy and ensure the outcome of elections is controlled by one political party.”

One of the most alarming attacks launched by Democrats in prior nominations was against Justice Barrett on the basis of her religious beliefs. Sens. Feinstein and Hirono called on her to explain her association with a traditionalist Catholic church group. Some liberal commentators launched vicious, often vulgar assaults; “Real Time” host Bill Maher declared, for example, that Barrett was “a f—ing nut … really Catholic. I mean really, really Catholic — like speaking in tongues.”

Yet, many of Barrett’s critics are likely supportive of presumed front-runner D.C. Circuit Judge Ketanji Brown Jackson, who sat on a now-defunct advisory school board for Montrose Christian School in Rockville, Md. As one conservative commentator has documented, the school provided “Christ-centered education for the glory of the Savior and the good of society.” Among the school’s “uncompromisingly” held principles is that God created men and women “as the crowning work of His creation. The gift of gender is thus part of the goodness of God’s creation,” that Christians must oppose “all forms of sexual immorality, including adultery, homosexuality, and pornography,” that marriage is the “uniting of one man and one woman in covenant commitment,” and that Christians should “speak on behalf of the unborn and contend for the sanctity of all human life from conception to natural death.”

The question is whether Democrats will now engage in the same pearl-clutching, breathless shock over this nominee’s apparent religious connections as they did over Justice Barrett’s.

We are light-years away from the days when Antonin Scalia and Ruth Bader Ginsburg could be confirmed 98-0 and 96-3, respectively. But in asking GOP colleagues to “keep an open mind,” Democrats are arguing for the confirmation process that they denied to three previous nominees.