The ECB Has A Huge Dilemma: Price Stability Or Bail Out Nations

Hello ECB president Christine Lagarde, what you gonna do? 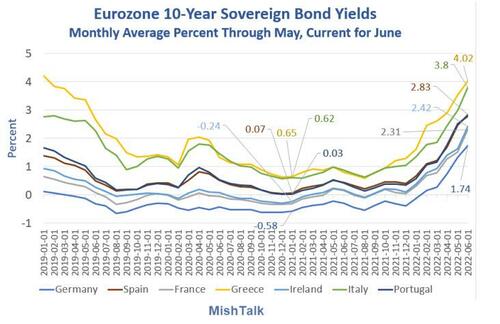 The spreads between German government bonds and those of the PIGS (Portugal, Italy, Greece, and Spain) have skyrocketed in recent weeks.

This comes while Eurozone inflation is at a record high 8.1 percent. 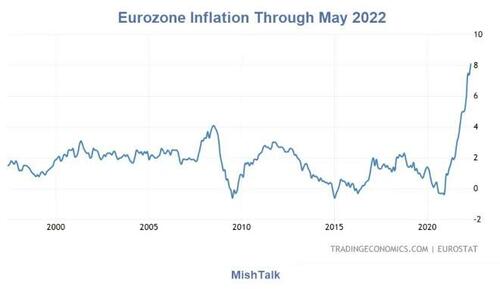 European Central Bank President Christine Lagarde told euro-area finance ministers that the ECB’s new anti-crisis tool will kick in if the borrowing costs for weaker nations rise too far or too fast, according to people briefed on their discussions.

At a meeting in Luxembourg Thursday, Lagarde explained to ministers that the new mechanism that central bank officials are devising is intended to prevent irrational market movements from putting pressure on individual euro nations as ECB embarks on its first interest-rate hikes in more than a decade, the people said, asking not to be identified discussing private conversations.

The ECB Governing Council on Wednesday instructed officials to accelerate work on a “new anti-fragmentation instrument” after the yield on Italian bonds surged amid signs that global inflation is becoming more entrenched.

There is no new tool and there won’t be a new tool. The ECB can use an existing QE tool to buy unlimited amount of sovereign bonds or not. It’s a choice, not a new tool.

Spreads collapsed in the wake of ECB QE (and bond buying of peripheral Europe.

Now the ECB faces 8.1 percent inflation, the most in history and it needs to hike rates and shrink it’s balance sheet.

What’s it gonna do? Shrink the balance sheet of Germany and expand that of Italy and Greece?

“We will do whatever it takes to save the Euro, and believe me it will be enough.“

Q: What did Draghi do?
A: Nothing!

Bond spreads collapsed on the announcement.

No New Tool, Just a Bluff

Hoot of the Day: The ECB said “Investors should not doubt the commitment of policy makers to deliver on their mandate to maintain price stability.”

There is no new tool here. It’s either a bluff or selective implementation of a previous QE tool. 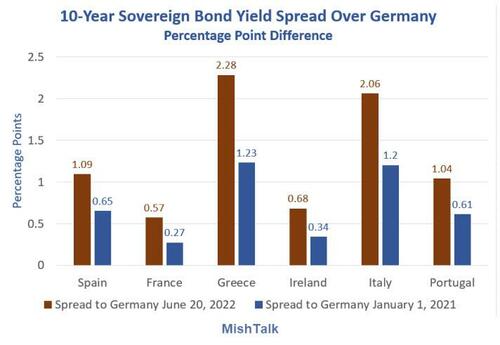 How to Resist Fiscal Dominance

Eurointelligence has an interesting column today on How to Resist Fiscal Dominance.

I have been observing this slow moving train wreck for a year now. Financial markets were absolutely certain that the European Central Bank would follow up with a new programme of asset purchases after the existing programmes expire. But when I talked to central bankers, I was regularly assured that this would not happen.

Over the last week, that conflict came to a head. The ECB announced the end of the asset purchases and did not put anything else in place. All the ECB said was that it would work on an emergency instrument. The bond markets panicked.

What is happening between the markets and the central bank is not just a form of mutual miscommunication. This is a power struggle. The ECB is resisting what is known as fiscal dominance, which is when a central bank can’t follow its target because it is under pressure to bail out governments.

There are no easy answers. The central bank knows it cannot ignore sovereign debt spreads, because they do affect monetary policy transmission mechanisms. The only instrument that would fix this problem is a mutualised eurobond.

So the Euro is at risk then https://t.co/wxqdKgld1z

They have to. Otherwise the Euro will die.

It takes unanimous consent to do that.

You imply Germany, Austria, Finland, and the Netherlands will all go along with the necessary treaty change.

A fundamental flaw of the Eurozone (and also of the EU) is that it take unanimous agreement to do nearly anything, especially male treaty changes.

Mario Draghi got away with a bluff because the pressures of globalization were disinflationary.

Lagarde will not get away with the same bluff, stated very wimpishly, because the forces of de-globalization and the war in Ukraine are very inflationary.

The problem the ECB faces is far more complex that the Fed’s problem. The Fed is on a mission to fight inflation and there is only one country to worry about. 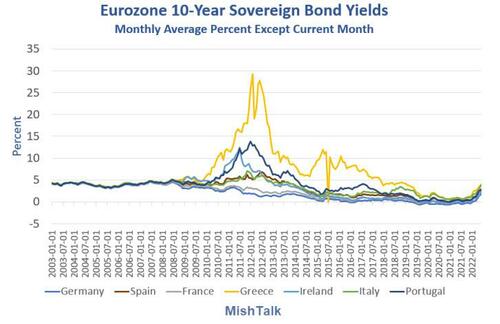 [ZH: We note that – just as with Draghi’s comments – spreads have compressed since the ECB jawboning. BUT, they have stalled at rather wide levels, seemingly unwilling to just front-run ‘nothing but promises’ by the central bank. Have they blown their bluffability?] 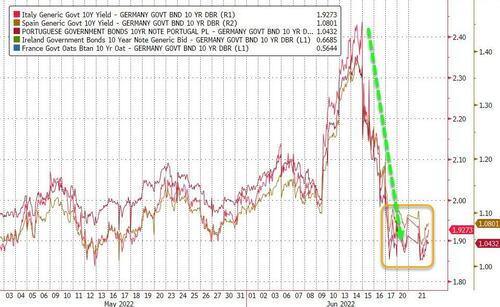 There is no single interest rate that makes any sense for Germany, Greece, Spain, Italy, and Portugal.

The Fed is struggling to find the neutral rate, and I believe will overshoot, but at least there is a neutral rate.

Lagarde is on Mission Impossible with 19 countries in the Eurozone, all with a different neutral.

In practice this is total nonsense, and for the third time the idea is being tested.

The Fed Searches For the Neutral Interest Rate, Where the Heck Is It?

For discussion, please see The Fed Searches For the Neutral Interest Rate, Where the Heck Is It?

Ok, Christine what will it be? Illegally shrink the balance sheet of Germany and expand that of Italy and Greece?

Leave interest rates in negative territory? Expand the balance sheet? What then?

The world awaits a new tool, and one that cannot possibly work.

Hoot of the Day Addendum

It’s unclear what ECB “political expediency” even is.

But that explains this “new tool” nonsense and the wimpy Draghiesque statement.

Lagarde is desperate to not unveil her new tool because there isn’t one.

She is hoping the problem just goes away. Will It?

ECB’S PRESIDENT LAGARDE: I WON’T REVEAL ANY FEATURES OF THE NEW BOND-BUYING TOOL.

What a hoot. I was not aware of Lagarde’s statement when I wrote this post or the preceding Tweet.