The Generals Will Be Back: Goldman Assures Its Clients That FAAMGs Will Make Triumphant Return

Earlier today, Morgan Stanley’s chief equity strategist Michael Wilson looked at what was likely the highlight of Q1 earnings season, pointing out that “the vaunted FAANMG stocks sold off on terrific 1Q earnings results after an outsized run into the event. This was… a reminder that stocks often peak on good news.”

Not to make a too fine point out of it, suddenly everyone is focusing on the performance of the FAAMG stocks which, after soaring for much of 2020 when they returned 56% and accounted for 7% of the 18% S&P 500 return last year, have gone nowhere in recent months prompting concerns that it’s all downhill from here.

Not surprisingly, FAAMGs were also the topic of the latest weekly note from Goldman’s chief equity strategist David Kostin, who writes that confronted with the prospect of decelerating US economic activity, the bank’s clients are suddenly freaking out about a breakdown in the 5 Generals, and are “asking about the potential for a transition in market leadership” even as “many investors have expressed the view that economic deceleration should support the outperformance of the largest “Big Tech” stocks in the market”, a topic which Goldman analyzed recently and which view the bank supports.

Despite its ringing endorsement of FAAMGs, Kostin admits that one common concern with this thesis relates to the high current market concentration compared with history, to wit: he five largest stocks in the S&P 500 represent 21% of index capitalization, significantly more than the long-term average of 14%, above the 18% at the peak of the Tech bubble in 2000, and only trailing the 25% level reached during mid-2020. This large index weight of the top stocks is important because it serves as a practical headwind to continued appreciation given SEC restrictions on portfolio concentration that limit how much mutual funds can continue to buy them. 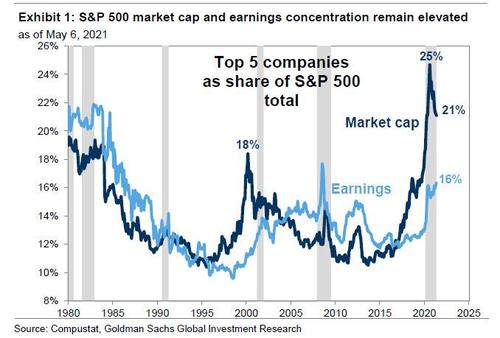 Of course, there is a fundamental reason why investors have piled into the FAAMGs, first and foremost, the durability of the revenue streams of these firms during 2020 was in stark contrast with the extreme declines exhibited by many other businesses. Last year, sales for the median S&P 500 company collapsed at its nadir by 7% before partially recovering to post flat full-year growth. In contrast, the five FAAMG stocks collectively grew sales by 18% even at the point of maximum contraction for the economy in 2Q. They grew full-year 2020 revenues by 21% vs. 2019. 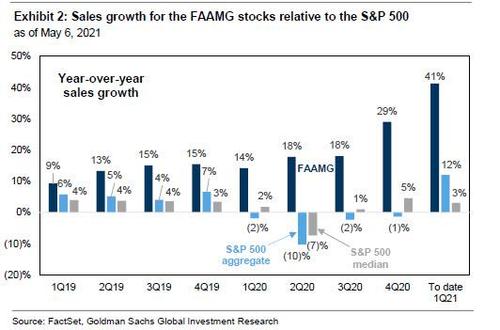 Q1 results show that the FAAMG growth persists. The median S&P 500 stock reported year/year sales growth of 9% and 57% of S&P 500 firms beat consensus sales estimates, with a median positive surprise of 4%. At the same time, the five largest stocks reported aggregate 1Q 2021 sales of $321 billion –a remarkable $24 billion or 8% above consensus – for year/year growth of 41%. For 2022, consensus expects the five stocks will post revenue and EPS growth of 14% and 10%, respectively, compared with 6% and 10% for the median S&P 500 stock.

But according to Goldman it’s not the topline growth that is the most distinguishing aspect of the FAAMG business models, but the amount and share of operating cash flow they devote to driving growth. During 2020, the five FAAMG stocks, spent $128 billion in R&D and another $104 billion on capex, accounting for 22% of the S&P 500 total. FAAMG posted a growth investment ratio of 64% over the last three years vs. 11% for the typical stock. As Goldman puts it, “they are investing their way to superior growth.” 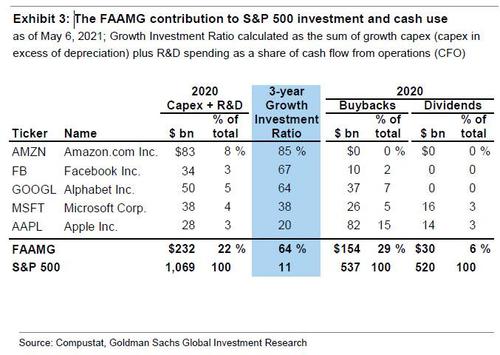 While those are the clearest positives propping up the FAAMGs, they are largely priced in; at the same time there is a list of sizable and growing risks, starting with Biden’s proposed tax reform which would raise both corporate and capital gains tax rates and represent possible sources of risk for the FAAMG stocks. If the Biden corporate tax plan were fully enacted, FAAMG 2022E earnings would decrease by roughly 9% relative to consensus expectations. FAAMGs generate approximately 55% of income abroad. Using a back-of-the-envelope approach, applying the proposed 28% domestic statutory rate and 21% tax rate on foreign income to each portion of FAAMG’s income, their collective effective tax rate would rise by 7% to 24% (vs. +6 pp to 25% for the median S&P 500 stock) and would decrease consensus 2022 FAAMG earnings by 9% (vs. -8% for the S&P 500).

Separately, the FAAMG stocks are also vulnerable to higher capital gains rates. If the capital gains tax rate becomes set to rise in 2022, investors subject to the higher rate may choose to realize some of their substantial capital gains in 2021 at the lower current tax rate. The FAAMG stocks have appreciated by $5 trillion during the last 5 years, accounting for 29% of the S&P 500 market cap increase during that time. Needless to say, if there will be selling, it could be furious.

It doesn’t end there: valuation multiples also pose a risk to the FAAMG stocks. Investor conversations around FAAMG inevitably turn to their valuations. FAAMG trades at a forward P/E of 29x (90th percentile for the top 5 stocks since 1980), compared with 21x for the remaining 495 S&P 500 stocks. This 34% P/E premium for the five largest stocks ranks in the 76th percentile since 1980.

That said, if multiples were to shrink everything would crash, which is why Kostin writes that “the current low level of interest rates and the fast pace of expected growth support the lofty multiples of the FAAMG stocks.” While the nominal 10-year Treasury yield has risen this year, at 1.6% it remains extremely low in historical terms, Kostin also makes some other valuation observations:

Low rates support the valuation of high growth, long duration stocks.FAAMG has an earnings yield gap (E/P less 10Y UST) of 191 bp, above the 40-yearaverage of 144 bp, indicating that the stocks are attractively valued adjusting for thelow level of rates. Valuation on a growth-adjusted basis also looks more reasonable:FAAMG actually trades at a 14% PEG discount to the median S&P 500 stock (1.7xvs. 1.9x). 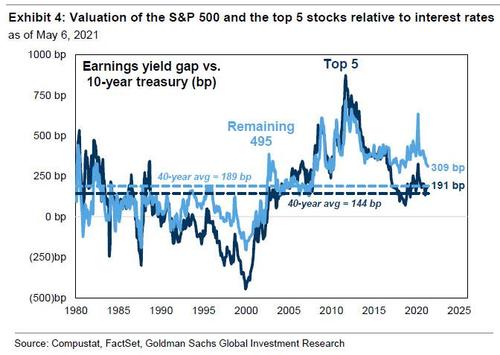 While all this worked in an ultra low rates environment, rising interest rates represent a potential headwind to FAAMG returns in coming months (incidentally Goldman rates strategists forecast10-year US Treasury yields will rise by 34bps to 1.90% by the end of 2021). Furthermore, all five FAAMG stocks have above-average duration compared with the Russell 1000, meaning they are especially sensitive to moves in long-term interest rates. As yields rose sharply from November through March, FAAMG underperformed the S&P 500 by 7 pp (+21% vs. +14%). A similar period of rising rates in 2H 2021 would likely hamper FAAMG returns.

Putting all this together, Kostin writes that the greatest fundamental risk to the continued market leadership of the five largest companies “appears to be the potential intervention of regulators.” He adds that recent Biden administration appointments “suggest some risk of a stricter regulatory regime and tighter antitrust enforcement.” He has a point: with the exception of MSFT, the other four FAAMG stocks face a laundry list of legal battles and investigations over their market power and competitive practices ranging from commercial litigation to DoJ and FTC antitrust lawsuits to Congressional probes.

Then again, as Kostin concludes, his year-end 2021 S&P 500 index forecasts of 4300 and 4600 at the end of 2022 assume these companies generate sales and earnings in line with consensus expectations, their relative valuations remain stable, and therefore implicitly that antitrust actions have no major impact.

In short, Goldman clients can just relax and keep buying the FAAMG dip.