The Growing List Of US Companies Laying People Off

So much for “building back better”…

In fact, layoffs are now “sweeping across American businesses,” according to a new report from Insider, who recently ran down a list of the U.S. companies that have begun hacking away at their respective labor forces.

In addition to the names you’d expect to be on the list, like Peloton (has laid off 2,800 people) and Netflix, there were also some lesser known and private company names that are making material layoffs. ‘

Better has been laying off 4,000 people from “late 2021” and “through the first several months of 2022”. CEO Vishal Garg reportedly told employees during a Zoom meeting that the company, “lost $100 million last quarter,” which he said, “was my mistake.”

He didn’t lay himself off, however, to the best of our understanding.

Weight loss app Noom has recently laid off hundreds of coaches as part of a total of laying off 495 people, the report says. Noom appeared to already be stretched thin, with coaches reportedly responsible for “giving advice to hundreds of users at any given time.” 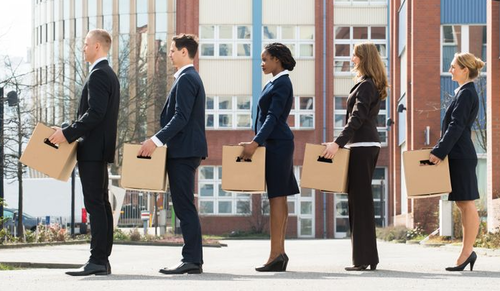 Thrasio, which is a company that created the Amazon aggregator market, has laid off 20% of its staff, the report says. A memo sent to employees blamed the layoffs on the company’s “hypergrowth” model of acquisitions. A memo sent to employees said: “At times we have been acquiring a new company almost every week and running hard to build the infrastructure to support this growth.”

Robinhood has also joined the party, laying off more than 300 people, the report says. Their layoffs come after the company’s staff grew from just 700 people to 3,800 people during 2020 and 2021, when the app saw an explosion of users thanks to the pandemic and its associated free government handout cash.

Wells Fargo is also making layoffs in its mortgage-related positions. A spokesperson for the company said to Insider: “We are carrying out displacements in a transparent and thoughtful manner and providing assistance, such as severance and career counseling. Additionally, we are committed to retaining as many employees as possible and will do everything we can to help them identify other opportunities within Wells Fargo.”

Pot company Canopy Growth is also laying off employees, with 250 people expected to get the axe. Canopy Growth CEO David Klein said the layoffs were “to ensure the size and scale of our operations reflect current market realities and will support the long-term sustainability of our company.”

Celebrity video app Cameo is laying off 87 people, its CEO also confirmed. Last Wednesday he commented: “Today has been a brutal day at the office. I made the painful decision to let go of 87 beloved members of the Cameo Fameo.”

And we have a feeling the list is just getting started…