The Problem With Money

I’m simply pointing out “money” isn’t simple, and “backing money with X” leads to questions about the nature of “money,” collateral and the fluidity and complexity of the social construct we call “money.” 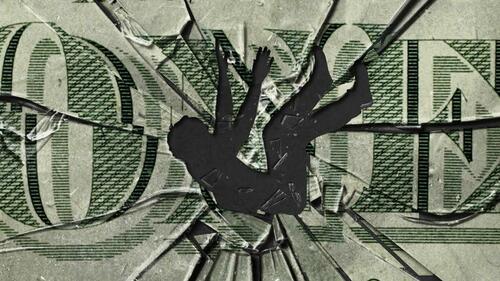 The problem with money is it isn’t just one thing. We think it’s one thing because we use it to buy things, but it’s actually a bunch of different things. This is why I often refer to it as “money:” in other words, one of the class of things that are stores of value, transactional grease, debts and various other bits and pieces.

Everyone wants to pin down what money is, but it isn’t that easy. Money stock in the U.S. is called M2, which is basically the total of cash in accounts. On the chart of total debt below (TCMDO), courtesy of the Federal Reserve St. Louis database (FRED), I’ve noted M2 is currently $21.8 trillion.

So are private-sector debt instruments. If you own a corporate bond or shares in a mortgage-backed security, you can sell those debt instruments for cash and buy whatever you want–or pay your taxes.

Note that all this debt “money” is backed by some sort of collateral. It might be a tangible object like a house on a parcel of land, or it might be the income stream from a government, corporation or individual.

Let’s say we want to back all our “money” with gold. Which kinds of “money” do we back with gold? All of it, or just M2? If we only back M2, i.e. cash, then what’s going to back the issuance of new “money” via mortgages originations, Treasury bonds, student loans, etc.? If not more gold, then what?

You see the problem. There is $88 trillion in “money” and only $21.8 trillion in cash. If we only back the cash (which also expands–see chart below), then what backs the rest of the “money” when people sell their bonds, etc.? 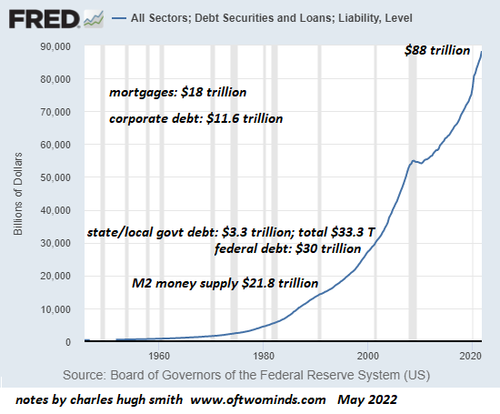 There was about $7.5 trillion in M2 “money” in 2008. Now there is about $22 trillion. If we’re backing that “money” with gold, do we triple the number of ounces of gold we hold to back the cash, or do we dilute the amount of gold backing each unit of currency by holding the same amount of gold? 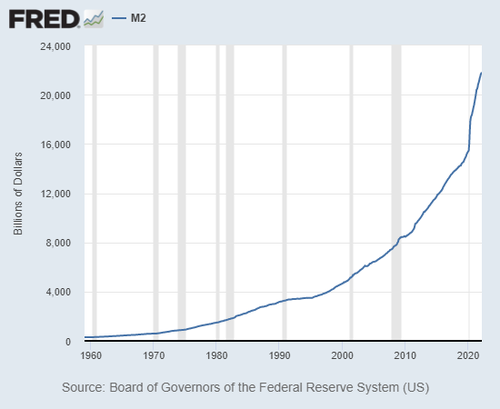 Do we limit the issuance of debt based on collateral? In other words, do we limit new loans to M2 cash, meaning any lender that wants to issue a mortgage has to have all the cash in hand? Dp we limit corporations from issuing debt to the cash they have on hand?

If we allow the expansion of “money” based on collateral, then how do we back such a rapidly expanding stock of “money”? If we grant that collateral “backs money,” and that income streams are a form of collateral, then why do we need to “back money” with gold or anything else?

So what happens when people sell half the collateral-based “money” to convert it into cash? The supply of cash increases, while the stash of gold backing cash stays the same. What’s the value of the cash measured in gold, given that each unit of cash now has a smaller claim on the gold stash?

Backing “money” with tangible things like gold sounds like a splendid solution to problems like inflation, but it comes with knotty questions about exactly what counts as “money,” what “money” is actually backed, and how is this “money” backed if it cannot be converted into whatever is backing it– gold, wheat, land, shares in a corporation, etc.

In other words, I converted cash into what “backed” the money: a house. If gold “backs” money, then it’s only actually “backing” money if I can convert my cash into gold, just as I can convert cash into a house by paying off the mortgage.

If we discount collateral as “backing money,” then what sort of financial system and economy do we have? Is collateral not a worthy “backing” of “money”? If not, why not? Why is a house and land not worthy of “backing money” any more than gold? And if I can’t convert my cash into gold, then what is backing my cash?

Wouldn’t I be better off with “money” that can be converted into collateral I can use such as a house than “money” I can’t actually convert into anything? These questions upend conventional beliefs about “value,” “backing money with X” and convertibility of collateral and “money.”

Am I proposing an answer to these knotty questions? No. I’m simply pointing out “money” isn’t simple, and “backing money with X” leads to questions about the nature of “money,” collateral and the fluidity and complexity of the social construct we call “money.”

My new book is now available at a 10% discount this month: Global Crisis, National Renewal: A (Revolutionary) Grand Strategy for the United States (Kindle $8.95, print $20). If you found value in this content, please join me in seeking solutions by becoming a $1/month patron of my work via patreon.com.