The World’s Fastest Trains… Are Not In The US

Ever since the invention of the steam locomotive in 1802, trains have been a driving societal force.

Invented in Britain at the height of the Industrial Revolution, steam trains gave the empire an unparalleled advantage in transporting goods and people. Soon it spread around the world as other nations scrambled to build their own railway networks to facilitate growth and commerce.

But just as nations rushed to build more railways, they also tried to build faster trains. As Visual Capitalist’s Omri Wallach details below, Japan’s Tōkaidō Shinkansen or “bullet train” in 1964 was the first high-speed rail system, achieving a speed above 124 mph or 200 km/h.

How do other countries and trains compare?

Let’s dive into the fastest trains in the world using data from Travel and Leisure magazine.

Who Has The Fastest Trains in the World?

Japan started the high-speed train revolution in earnest, and it’s still at the top of the charts.

In fact, the top two fastest trains in the world are maglev, using two sets of magnets to elevate the train and propel it forward without friction to slow it down. 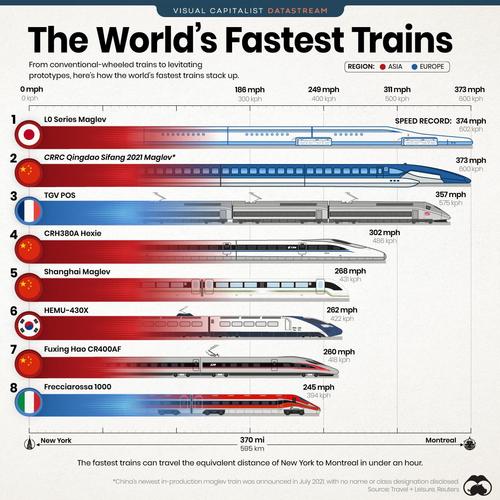 Japan’s L0 Series Maglev is still in production, but with a land speed record of 374 mph or 602 km/h it is the fastest train in the world.

Japan is facing stiff competition from China, which already has the world’s longest high speed railway network and is investing heavily in infrastructure.

China already has a maglev train in operation, the Shanghai Maglev, which connects the city center with the international airport. The country’s latest unveiled train in July 2021 achieved a land speed of 373 mph or 600 km/h.

When it was unveiled, the new maglev train was announced as the fastest operating train in the world as it enters full production. But until full operation actually begins, its test speed record is still under that of the L0 Series.

In fact, China has half of the eight fastest trains in the world. Including Japan and South Korea, Asia accounts for the bulk of high-speed rail networks and record speeds.

Though it’s not all maglevs and Asia dominance. Conventional electric trains in Europe also made the list, with France’s TGV POS and Italy’s Frecciarossa 1000 reaching speeds of 357 mph (575 km/h) and 245 mph (394 km/h) respectively.