There Are Now More Job Openings Than Unemployed Workers

Starting in 2018 and lasting all the way until the covid pandemic, a remarkable golden age flourished in the US job market: that’s when for 24 consecutive months there were more job openings in the US than unemployed people. Of course, this remarkable strength in the job market ended with a thud in early 2020 when the US economy was shut down in March due to the covid pandemic, and when there were a record 18.5 million more unemployed than there were job openings.

How things have changed since then: according to the BLS, as of July the number of unemployed employees had dropped to 8.7 million, down sharply from 9.5 million in June and the lowest since March 2020. But what is more notable is that this happens during a time of historic labor shortages, with the NFIB yesterday reporting that unfilled job openings at small business had hit a new record high, with 49% of owners reporting job openings they could not fill in July, according to NFIB’s monthly jobs report. Unfilled job openings have remained far above the 48-year historical average of 22%.

And putting this number in its proper context, according to the latest JOLTs report, there were 9.2 million job openings as of May with the NFIB report confirming that this number had only risen in the subsequent two months.

What this means is that at least according to this key measure, the US jobs market has not only shown “substantial further progress” but has now fully renormalized. 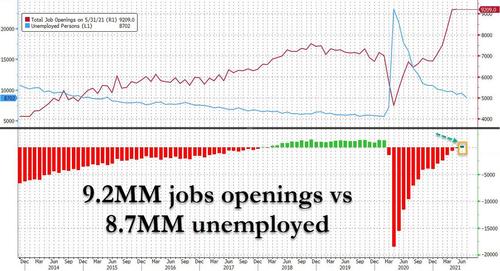 There is one caveat: when all emergency unemployment benefits expire next month, it is likely that many of those job openings will be filled as millions of people currently receiving government welfare have to rejoin the labor force leading to a sharp drop in job openings, assuming of course that the delta variant, and lambda that is following, won’t shut down the economy in the coming weeks.