There’s A Racist And A Communist Hiding Under Every Bed

Critical Race theorists start with an important truths, that slavery was wicked. From there things get more than a bit strange… 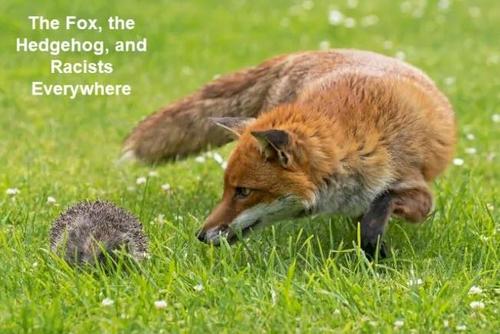 The WSJ has an interesting article called the Hedgehogs of Critical Race Theory.

The world’s hedgehog population tends to expand in times of stress and change. Lately it has exploded in the U.S. Hedgehogs are thick on the ground, all of them advancing One Big Thing or another—each peering through the lens of a particular obsession.

Critical race theory has spread across the U.S. like—forgive the expression—a virus, coming to infect primary schools and high schools and universities, foundations, art museums, big corporations, the military, local, state and federal government bureaucracies. It’s everywhere in the West Wing. President Biden, who spent almost 40 years following the ways of an amiable political fox in the Senate—exchanging pleasantries and now and then doing legislative business with Confederate mossbacks like Strom Thurmond and James Eastland —has, in his old age, signed on with the monomaniacs of the left.

Hedgehogs, who deal in absolutes, are liable to get carried away. It was said in the era of Joe McCarthy that he and his followers saw a communist under every bed. The single-minded ideology of critical race theory sees racism in every white face—a racism systemic, pervasive, inescapable, damning. All white people are racists. The doctrine devolves to the crudest form of what might be called racial Calvinism: Americans are predestined—saved or damned, depending on the color of their skin.

Racists Under Every Bed

I saw a Tweet a few days ago that fits the theory perfectly. It was from September 2020 but may as well have been yesterday and likely is somewhere.

Northwestern U. law school had a town hall meeting online recently. Everybody began w/ a ritual denunciation of themselves as racist. Reader: “Prof. Speta is not a racist. He is a wonderful man universally loved by students. It makes me sad that he is forced to say otherwise.” pic.twitter.com/O45UX8ver2

In a diversity session, Northwestern Law Administrators Confess Their Racism.

In screenshots taken of the virtual event, three administrators can be seen calling themselves racist and promising to “do better,” including the law school’s interim dean. “I’m Jim Speta. And I am a racist,” the dean wrote. Another administrator called herself a “gatekeeper of white supremacy.” The meeting was hosted by Associate Dean of Inclusion and Engagement Shannon Bartlett.

An inside source—who did not wish to be named for fear of retribution—told the Washington Free Beacon that the training was optional and hosted primarily by white women who informed faculty and staff how to act like an “ally” to people of color on campus. The source said there were more than 100 people at the event and that dozens of attendees repudiated their own racism.

After screenshots of the training circulated on social media, several Northwestern law alumni said they would no longer donate to their alma mater. Ron Coleman, a partner at the Dhillon Law Group and a 1988 Northwestern alumnus, told the Free Beacon that such events do a disservice to students.

Hello my name is [insert your name here] and I am a racist. I know this because [insert reason] …