In fact, the newfound dominance of retail traders has taken an old market dynamic and flipped it on its head: in contemporary markets, it’s retail traders who generate buzz in a stock by driving it higher, drawing the attention of institutional traders, before the “dumb” money rotates out, leaving the “smart” money holding the bag. The dynamic has been perhaps the most pronounced with GME. 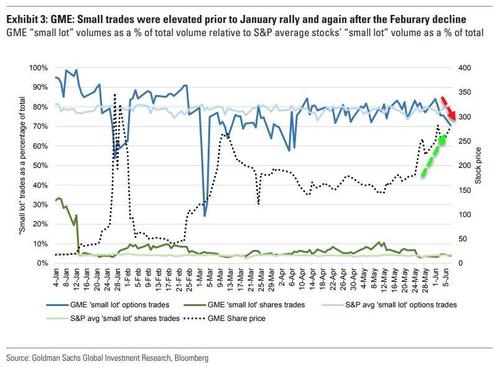 Institutional traders have taken notice of this newfound retail “edge”, which is why firms like Cindicator Capital are looking to hire a longtime “WallStreetBets” vet instead of an institutional trader. The firm’s job posting made the media rounds because of its ask that applicants have “at least 1,000 of Reddit’s goodwill karma points.” The firm is offering a salary of $200K plus bonuses (along with a place in a Burning Man camp).

And while that posting likely elicited plenty of scoffs from the industry, a WSJ report published Friday suggests that the firm might be on to something, since the explosion of retail trading activity that emerged last year has only intensified during the first half of 2021. Citing an estimate from JMP Securities, WSJ said new brokerage accounts opened by individual investors have already roughly matched the total opened throughout 2020.

What’s more, individual investors have poured a net $140.57 billion into US stocks this year, according to data from Vanda Research’s VandaTrack. That’s up roughly 33% from the same period a year ago.

Thanks to zero-commission trading and the advent of payment for order flow, has sent retail’s share of average daily US equity-market turnover to 20%, double its level from a decade ago. 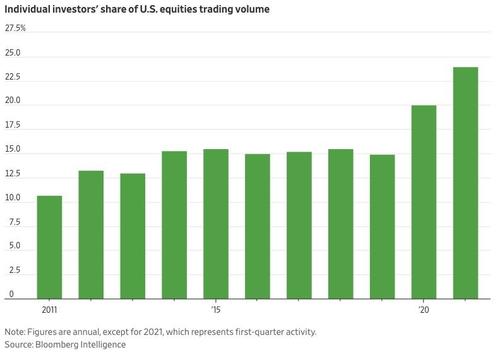 Larry Tabb, an analyst who focuses on market structure, warned that he expected individual investors’ elevated levels of trading activity to continue for the foreseeable future.

“They definitely have influence, and they’re not going away,” he said. “We think for the next year or so, 18% to 22% of the market will be driven by retail.”

Data shows that retail traders are mostly focused on the short term, and they tend to move into and out of stocks with great force.

Take, for example, a basket of meme stocks that feature prominently on Reddit’s WallStreetBets platform. Data from VandaTrack shows that investors moved into the basket—which features companies including GameStop, AMC and BlackBerry Ltd. —quickly in January, before largely abandoning the trade only three weeks later.

Inflows into the basket have surged again in recent weeks, but already, data shows, the tide is turning. The price of the basket has fallen 17% over the past week, Vanda Research said in a note Wednesday morning, as flows into the stocks have also begun to slow.

“This is changing the way that one potentially trades these spaces—gone are the days when you can buy and hold a small-cap name and hope it yields 50% over time. It almost does that now in a matter of days,” said Viraj Patel, global macro strategist for Vanda Research. “Market timing is the best friend of the app trader in this space.”

This has made short-sellers extremely wary, causing short interest in these stocks to slump. 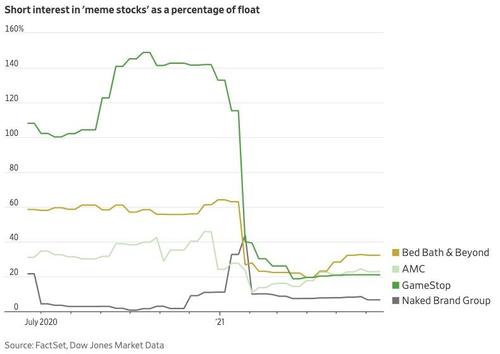 The surge in retail trading has been a boon for electronic market-makers like Citadel and Virtu. It’s also been a boon for banks and other operators of “dark pools”, as these firms increasingly favor private trading venues to executing trades on the New York Stock Exchange. In January, the amount of trading volume in the US market started happening off exchanges climbed to a record 47%, data from Rosenblatt Securities shows. Certain stocks have seen off-exchange trading volume soar to nearly 80% of trading for Sundial Growers. In May, the figure for AMC was 57%.

“There were many days in December and January in which off-exchange trading was greater than 50% of total volume,” said Justin Schack, partner at Rosenblatt.

Why is this privacy so important to the market makers who have been the ultimate winners from the retail trading explosion? While regulators have acquiesced to the practice thanks to hollow arguments about price improvement, studies have shown that this appears to be a case of penny-wise, pound-foolishness. In fact, as Themis Trading explained in recent commentary to the House Financial Services Committee, PFOF increases overall costs for all investors.