This Is The Worst Year On Record For Markets… So Far

In fact, as his chart of the day demonstrates, the S&P 500 is currently on track for its worst H1 performance since 1932 at the depths of the Great Depression, having shed -22.3% so far this year in total return terms. That just edges out 1962, when the index lost -22.2% over the first six months of the year.

But for those with a traditional 60/40 type portfolio, the news doesn’t get any better, since 10yr Treasuries are currently on track for their worst H1 since 1788.

Globally, bond and stock markets combined have lost a stunning $36 trillion dollars from their peak. 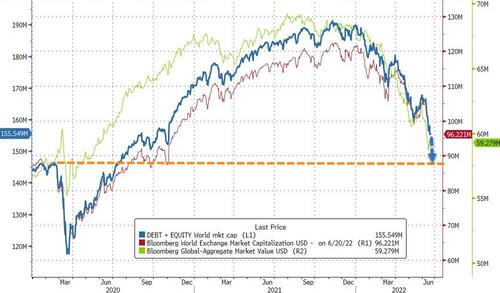 It’s not all bad news, and those readers looking for some positives may be comforted to learn that the 5 worst H1 performances for the S&P 500 before this year, all saw very good H2 performance.

Still, what happens in H2 is quite binary: if we don’t see a recession materialize over that period, Reid suggests that it might be tough for markets to continue to be as bearish as they have been, and a bounce back resembling history might be possible. However, it’s hard to see markets recovering if we see firm evidence of the recession.

For what it’s worth, regular readers of the Deutsche Banker will know that he still favors 2023 as the starting point of the US recession (and bigger market falls) but even he now concedes – following Nomura’s forecast this weekend that the recession begins in late 2022 – that the risk of an earlier move is clearly building with declining financial conditions, and consumer and business confidence plummeting. 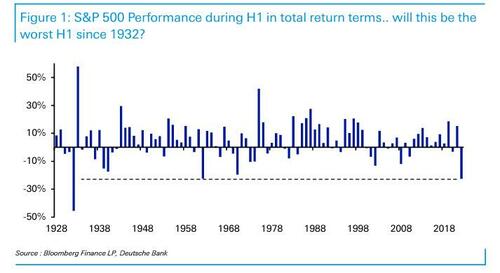