After the latest scandal over “sexist comments” which initially appeared some failed attempt at a joke during a press conference, the president of the Tokyo Olympic organizing committee Yoshiro Mori has resigned.

Japan’s Kyodo news agency is citing sources “familiar with the matter” to report that he plans to formally step down on Friday, just five months ahead of the “Tokyo 2020” Olympics’ scheduled start, which was pushed back from last summer due to the global pandemic.

83-year old Mori had unleashed a social media storm last week which was since picked up in a torrent of international reports after he publicly commented that it’s “annoying” when women go past their allotted speaking time. He essentially told an entire press event that “women talk too much”.

The comments had come in response to a question that pointed out the Tokyo Olympics organizing committee’s executive board is male-dominant:

“When you increase the number of female executive members, if their speaking time isn’t restricted to a certain extent, they have difficulty finishing, which is annoying,” he said, as told by an Agence France-Presse translation of an Asahi Shimbun story.

“Women are competitive,” Mori added. “When one person raises a hand, others think they need to speak up as well. That’s why everyone speaks.”

“Some members of the committee reportedly laughed at Mori’s remarks…” WaPo had noted in its reporting the incident.

According to the AP, “Mori, a former prime minister, gave a grudging apology a few days after his opinions were reported but declined to resign.” But the pressure has built over the past days, with pundits calling it a matter “safety” and “security” for women who felt threatened by Mori’s comments. 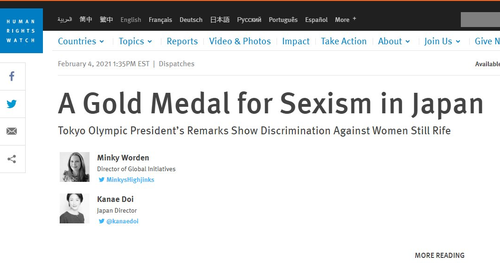 The comments from the out of touch octogenarian caused Reuters to write the following, for example: “The incident has cast another dark shadow over the Games, postponed for a year due to the coronavirus pandemic, with just months left before the opening ceremony.”

Tokyo’s female governor, Yuriko Koike, later added fuel to the controversy by saying, “The mission of the metropolis and the organizing committee is to prepare for a safe and secure Games, and we are facing a major issue.”