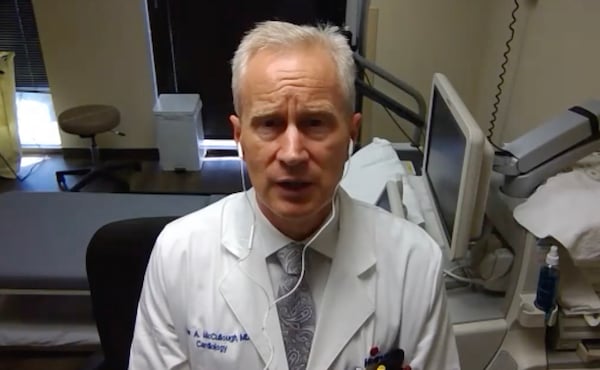 Dr. Peter McCullough in an interview with WND on Dec. 23, 2021 (Video screenshot)

A world-renowned heart doctor and epidemiologist who has led the way in countering the government’s “safe and effective” COVID-19 vaccine narrative says COVID shots and boosters are responsible for the “explosion” in sudden deaths of young people.

Dr. Peter McCullough of The Wellness Company studied the “sudden deaths” of young athletes over time and said there is no sensible explanation other than the often-mandated COVID vaccines for what he says is a tenfold increase in such tragedies since 2020. That is when the experimental mRNA (messenger RNA) vaccinations were launched.

The very accessible McCullough is the most visible among a band of dissenting doctors who have steadfastly resisted governments’ and corporations’ rigid COVID policies. For that, he has been heralded by conservatives the world over, with one Australian online broadcaster, Maria Zeee, calling him “the shining light in the darkness.” In a typical interview, McCullough will cite a half-dozen scientific studies from memory. He has criticized:

TRENDING: FBI admits it uses CIA and NSA to spy for it

For this McCullough is despised by many on the left and routinely accused of spreading “misinformation,” even by once widely-respected news operations like AP that seemingly have moved from holding government agencies accountable to joining forces with the state to squelch dissent.

But perhaps what McCullough’s critics resent most is his uncanny ability through media to reach huge audiences and cite scientific studies to deconstruct the left’s spin on COVID, as he most famously did in his December 2021 interview with podcaster Joe Rogan. McCullough writes on his Substack, “Courageous Discourse”: “The total number of people impacted by the interview was in the many tens of millions or even more.”

A short bio of Dr. McCullough on his personal website states, “He is an internist, cardiologist, epidemiologist, and the Chief Scientific Officer of The Wellness Company. … Dr. McCullough is one of the most published cardiologists ever in America, with over 1,000 publications and 660 citations in the National Library of Medicine and is a recipient of the Simon Dack Award from the American College of Cardiology and the International Vicenza Award in Critical Care Nephrology for his scholarship and research.”

The esteemed cardiologist has paid a heavy price for refusing to self-censor or tout the establishment line on COVID. Art Moore of WND News Center, who interviewed McCullough in January 2022, reports that McCullough:

Are the COVID vaccines linked to the “explosion” of deaths in young people?

“…testified to the U.S. Senate in November 2020 against what he described as the federal government’s politicization of health care during the pandemic, curbing or blocking the availability of cheap, effective treatments. In a speech in September [2021], he told of having been stripped of the editorship of a Swiss-based journal after having lost his position with a major health system, “with no explanation and no due process.” Baylor University Medical Center fired him in February. And Texas A&M College of Medicine, Texas Christian University and University of North Texas Health Science Center School of Medicine have cut ties with McCullough, accusing him of spreading misinformation.”

Young athletes dropping dead
Fox News talk show host Laura Ingraham interviewed McCullough Jan. 12. Citing the cases of Jordan Tyler Brister, Hunter Brown, and Blaze Jacobs, she asked him a question that has been on a lot of people’s minds: “Why does it appear like an inordinate number of young, healthy Americans are dropping dead?”

McCullough responded citing his and others’ analyses of cardiac arrest incidents among players in European soccer leagues, both pro and semi-pro. He said that before COVID-19 vaccines, an average of 29 active players died from cardiac arrests per year. But “since the vaccines have been released, that number, now annualized from a universe of publicly reported deaths we reviewed, is now 283, nearly a tenfold increase. And we’ve also demonstrated a rising mortality in those under age 15.”

He said there is a “straight line” correlation between the vaccines and the “explosion of death of young people.”

In a Jan. 15 interview with Zeee Media, McCullough explained: “The straight line is this: the [NFL] teams mandated the vaccine. The FDA [U.S. Food & Drug Administration] says the vaccines cause myocarditis (heart damage) and blood clots. The autopsy studies that are done, when they identify people dying after [taking] the vaccine, show myocarditis and blood clots as the cause of death. And now we have this rash of sudden deaths.”

Critics of McCullough have challenged his numbers, which are complicated by such factors as what he calls the “airtight silence” among most surviving relatives as to whether the “sudden death” victims had received the mRNA shots. But the sheer number of “sudden deaths” in the media has caused widespread suspicion in the public of a link between the COVID shots and the untimely deaths. (See this useful analysis in the South African site BizNews.)

Ingraham asked McCullough if Dr. Anthony Fauci, former director of the National Institute of Allery and Infectious Disease at the National Institutes of Health, was correct in a recent interview in which he downplayed the risk of cardiac arrest arising from the MRNA jabs. Fauci told CBS: “It is very, very rare. … Overwhelming, COVID itself causes that in a dramatically higher rate.”

McCullough responded: “No, he’s not [correct]. In a paper by Daniels and colleagues in JAMA [Journal of the American Medical Association:] Before the [COVID] vaccines, the NCAA [National Collegiate Athletic Association and] Big 10 looked for myocarditis. They screened thousands of athletes. They found a handful of cases, none of which were [considered statistically] significant.”

He cited another study from Israel that showed “before the vaccines … with COVID there wasn’t a higher rate than the background rate of myocarditis. … Now we’re seeing an explosion of myocarditis, which the FDA agrees happens in young people, 90 percent men … due to the COVID-19 vaccine – fatal cases. … So Fauci is wrong on this. This myocarditis is serious, the vast majority are hospitalized, and it can be fatal.”

Regarding the on-field collapse of Buffalo Bills Damar Hamlin, which has gripped the nation, he told Ingraham: “Unless there’s some emergence of [another] clear-cut cause, as a cardiologist, my conclusion would be that it’s COVID-19 subclinical myocarditis until proven otherwise.”

Why are athletes and otherwise healthy people suddenly collapsing and dying from cardiac arrest pic.twitter.com/Ze8LXDbaCH

At press time, the Centers for Disease Control and Prevention (CDC)’s informational page on myocarditis (“inflammation of the heart muscle”) and pericarditis (“inflammation of the outer lining of the heart”) acknowledges the risk of getting both after receiving the COVID vaccination (“more often after the second dose”). But the CDC still recommends that “everyone ages 6 months and older get vaccinated for COVID-19.”

The CDC page states: “The known risks of COVID-19 illness and its related, possibly severe complications, such as long-term health problems, hospitalization, and even death, far outweigh the potential risks of having a rare adverse reaction to vaccination, including the possible risk of myocarditis or pericarditis. If you have already gotten the first dose of Pfizer-BioNTech or Moderna vaccine, or if your child has already gotten the first dose of the Pfizer-BioNTech vaccine, it’s important to get the second dose unless a vaccination provider or your doctor tells you not to get it.”

The link above to “second dose” jumps to another CDC page recommending booster shots even for “children aged 6 months to 4 years.”

A chorus of dissenting doctors have warned against such COVID shots, especially the boosters, which, according to McCullough, heighten the risk of myocarditis.

Here are some of Dr. McCullough’s latest thoughts on COVID-related issues, mostly from an interview he did with BlogTalkRadio host Greg Penglis, published Jan. 18:

• Why he didn’t take the COVID vaccine: “…the lethal protein, engineered in a lab in Wuhan, China … produced in the body in an uncontrolled manner. … There was no way I was going to take the COVID vaccine! I was stunned at how many doctors took it. It was a very dangerous proposition from the beginning.”

• Early signs of reckless approach, not making safety preeminent: “I was stunned in the first week of the vaccine program when pregnant women started taking the vaccine … when people who already had the [COVID] illness [took it] – we never do that! I mean, if a child had chickenpox, we wouldn’t give [him] a chickenpox vaccine. We would never do that. … When I saw these things happen early in December 20202, I said, ‘Wait a minute: we’re violating every tenet of good clinical practice … [the proper emphasis should be] safety, safety, safety!”

• Pfizer knew of death risk: “Even Pfizer … within 90 days, knew about 1,223 deaths [after taking the COVID vaccine]. … People were taking the vaccine, dying with a day or two, and people were calling Pfizer in desperation saying, ‘My loved one just died of the vaccine.’ Pfizer dutifully recorded all these numbers and when they were pressed to release this [information] in the court proceeding under FOIA [Freedom of Information Act], the lawyer for the FDA did not want to release that data source from Pfizer to the public for 55 years. …”

• FDA complicit with Pfizer: “So we have evidence our FDA is actively involved in a safety disaster cover-up, and Pfizer being one of the suppliers. … Imagine recording 1,223 deaths in the corporate offices of Pfizer and the Pfizer execs don’t shut it down.”

Why are America’s children systematically sexualized at school, and by transgender recruiters on social media platforms like TikTok, seducing many into “identifying” as the opposite gender, or a brand-new imaginary gender, then encouraged to take powerful drugs and hormones and have their healthy breasts amputated or undergo chemical or surgical castration?
Why are our children simultaneously indoctrinated with toxic Marxist ideologies like “critical race theory” intended to condition them to hate and reject their own country, parents, faith, race, gender and themselves? Why are they simultaneously being frightened of the future by being fed lurid, terrifying – and groundless – apocalyptic tales of the imminent destruction of the world due to global warming?
No wonder youth suicides have skyrocketed, as have depression, anxiety, addiction and drug overdoses. Indeed, fentanyl, the No. 1 cause of death of younger Americans 18 to 45, destroys multitudes of children annually.
Make no mistake: The harm being done to America’s children in this multi-front war is not accidental: Children are the primary target.
WHY? How can all this be happening in the greatest nation on earth? Who and what is behind it? And HOW CAN IT BE STOPPED?
Find out in the explosive January issue of WND’s critically acclaimed monthly Whistleblower magazine, “WINNING THE WAR AGAINST AMERICA’S CHILDREN,” available in both print and state-of-the-art digital editions.