With Beijing’s regulatory framework changing by the day – if not the hour – as part of the emerging “Paradigm Shift” in China, a popular question that has emerged is which sector’s shareholders does China plan on destroying today by publishing a harshly worded op-ed…

Which industry will China destroy tonight

Making matters worse, now that China’s crackdown is a daily event, it has become virtually impossible to keep track of all the latest developments.

To make it a little easier, Morgan Stanley’s China economist Robin Xing has penned the following tracker of China’s “regulatory reset”, noting that regulatory issues linger in the healthcare and technology  sectors, while policy support is skewed toward decarbonization. Further, the bank tracks regulatory developments in key sectors as follows:

1) Healthcare: An article in the People’s Daily on Aug 9 reported incidences of improper sales/marketing practices and safety concerns in the medical aesthetics sector, quoting expert views for stronger regulatory oversight on credentials, service quality and pricing.

Morgan Stanley analyst’s take: Sean Wu and Yolanda Hu believe that while this is a reiteration of previous guidance, the medical aesthetics sector, which has been a loosely regulated segment, could see tightened regulations over time to reduce accidents and penalize sales practices that promote unnecessary surgery procedures.

2) Technology: The Haidian District People’s Procuratorate in Beijing announced on Aug. 7 that it intends to initiate a public interest lawsuit against Tencent, due to alleged compliance issues with the “Minors Protection Law” in the “youth mode” of the company’s WeChat app.

Morgan Stanley analyst’s take: Gary Yu believes that the lawsuit reflects increased scrutiny to protect minors. Tencent proactively launched the “youth mode” on WeChat in Oct 2020 to align with regulatory focus,and has been fine-tuning the functions while conducting a series of self-rectifications across the ecosystem, including implementation of stricter curbs on minors’ access to mobile games and suspension of new user registration for WeChat.

3) Decarbonization: In a recent response to the NPC, the Ministry of Finance indicated that it is drafting supportive fiscal measures (covering fiscal and tax policies) in relation to the “30/60” carbon emission targets.

Finally, here is a handy cheat sheet summary of all the recent regulatory developments across China’s economy: 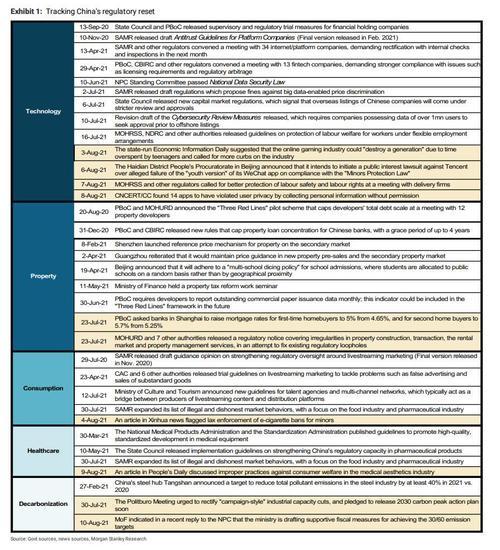