A great deal has changed for Russia (and Ukraine) since the close on Friday and traders are bracing for chaotic movers in commodity, bond, and FX markets. 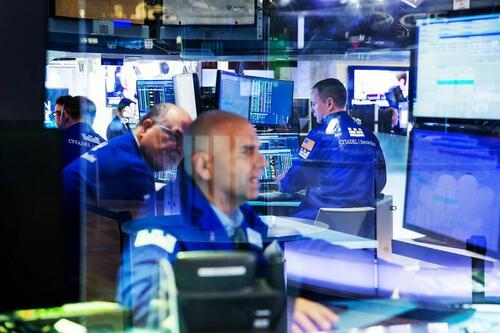 Amid ATMs drying up, Central and Commercial bank sanctions (as well as personal sanctions), and talk of SWIFT-constraints; combined with significant credit ratings downgrades, capital flow from Russian assets could accelerate fast as we suspect most traders will live by the ‘Margin Call’ maxim of “be first, be smarter, or cheat” and sell-first before asking questions (despite some potential silver lining from talk of Ukraine being willing to talk).

As Bloomberg reports, sanctioning Russia’s central bank is likely to have a dramatic effect on the country’s economy and its banking system, Elina Ribakova, deputy chief economist for the Institute of International Finance, said before the latest round of penalties was announced.

“This would likely lead to massive bank runs and dollarization, with a sharp sell-off, drain on reserves — and, possibly, a full-on collapse of Russia’s financial system.”

S&P Global cut Russia’s credit rating one notch to BB+ (and Moody’s said it was reviewing for a potential downgrade, which could take Russian debt into junk). Additionally Ukraine was also downgraded to CCC from B.

The economic impact of the various sanctions are significant… 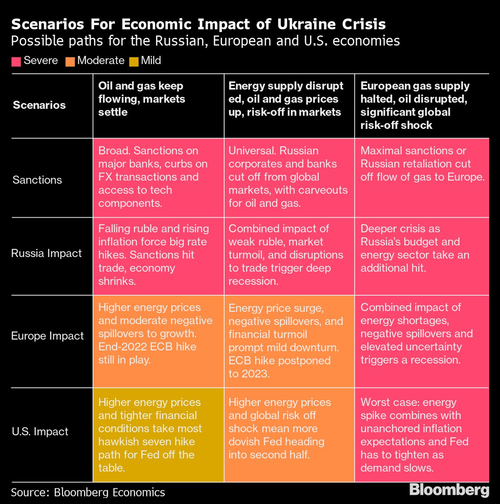 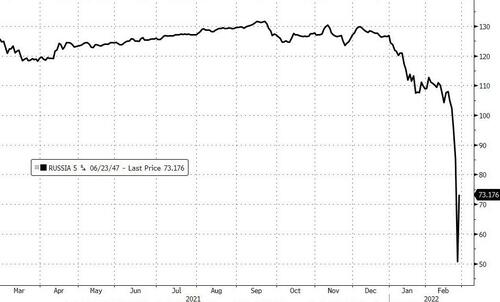 As we noted earlier, there are indications that the ruble could fall sharply when trading opens.

Exchange rates being offered by lenders (retail) are already varying widely on Sunday, from 98.08 rubles per dollar at Alfa Bank to 99.49 at Sberbank PJSC, 105 at VTB Group and 115 at Otkritie Bank in Moscow.

Russian bank Tinkoff now offering to exchange rubles for dollars at a rate of 171 rubles per dollar. It was 83 before the European/US announcement about targeting the Russian central bank. Currency market formally opens tomorrow. This is brutal. pic.twitter.com/NsTBI4tvTZ

Let’s just hope this is an outlier…

It is real. Holy fycking shit. 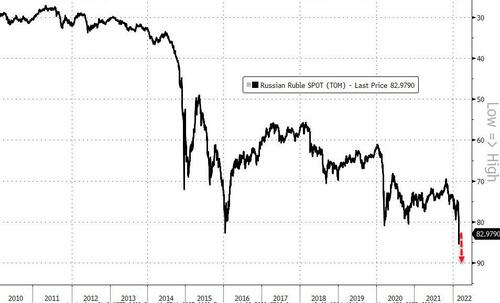 “In currencies, we note that last week the yen and Swiss franc did not materially outperform, so we would just focus on dollar demand for the time being.”

Commodities are also heading for a manic start to the week as investors scramble to assess how the West’s latest sanctions on Russia will affect flows of energy, metals and crops.

The gas market will become “even rockier” as while Russia is unlikely to choke off supplies to Europe for a prolonged period, it’s something that can’t be ruled out — especially if sanctions are ratcheted up.

Additionally, prices of grains and cooking oils have taken another powerful leap upward following the invasion of Ukraine, a country that’s been labeled the breadbasket of Europe. Russia is also a top supplier of wheat and sunflower oil.

Investors will be waiting to see how the latest sanctions affect trade in metals like aluminum, nickel and palladium where Russia is a major producer. Just as in energy, the U.S. seemed unwilling for now to directly disrupt Russian supplies. That could be a lesson learned from 2018, when curbs on Russia’s top aluminum producer sparked months of market chaos.

It is also worth noting that in the immediate aftermath of Russia’s invasion, investors rushed to bullion in a flight from geopolitical tumult and economic risks. The precious metal hit a 17-month high before retreating as the first batch of Western sanctions on Russia were viewed as underwhelming. As Bloomberg notes, this might make gold a good early gauge on Monday of how markets see the latest measures.

Finally, before US futures open, traders should consider if the ‘relief rally’ – driven by hedge unwinds on the basis that Biden didn’t pull the SWIFT trigger – may be moot since Europe seems hell-bent on some form of SWIFT-restriction for Russia, and the knock-on effects of that liquidity-suck are hard to fathom.