As DB’s Jim Reid notes in his Chart of the day note, “some may note the slight deceleration in the YoY figures for headline (8.3%) and core (6.2%) from March’s readings (8.5% and 6.5%, respectively) are a sign that the tightening in financial conditions via tighter monetary policy may well have started to impact the real economy.” However, as the credit strategist notes, along with monetary policy acting on long and variable lags, there’s a worrying trend in the underlying decomposition. And, as Reid shows in today’s CoTD, the contribution of core services to overall CPI readings has been marching steadily higher since ebbing out in the middle of the pandemic. 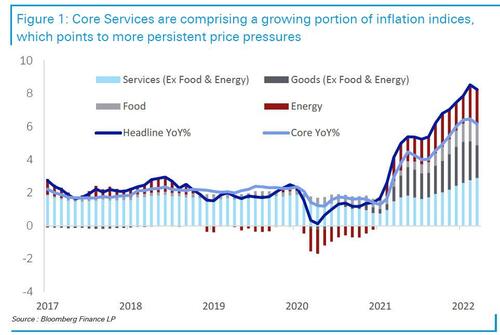 During those days, the low core services readings was one of the main tenets of the transitory inflation view, since core services, items such as rent, tend to be much more persistent than volatile components like food, energy, or consumer goods. Since the inflation problem seeped into core services over the last year, they’ve been on a steady march higher, shown by the light blue bars in the CoTD, meaning the Fed will have to go fast and far to bring aggregate indices lower, as core services will be even more resistant to tighter policy.

This is a point made repeatedly by a model used from DB strategist Francis Yared. after being correct since last summer, the model is now suggesting that the YoY rate may still have a couple of percentage points to go over the next 6 months. 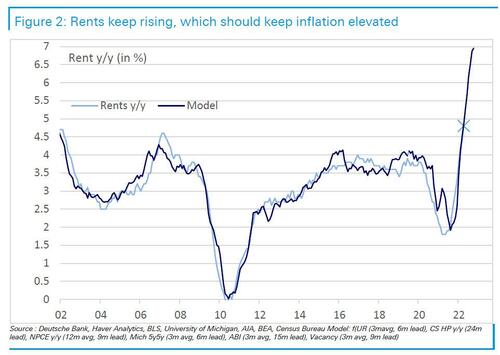 If this model continues to be correct then the Fed will likely have to hit levels more consistent with Reid’s “Why the coming recession will be worse than expected” piece.