Treasury Traders Brace For A Change In Tune

If the first half of the year was about the Fed battling inflation, the second half may be about the monetary authority continuing to raise rates against a backdrop of fears about the economy.

While Treasury traders have been circumspect about the health of the US economy for a while now, last week’s PMI numbers sent a shiver down the spine. While manufacturing proved resilient, the services sector — the more predominant segment of the economy — fell as fast as a meteorite. Coming on top of earlier numbers out of Europe that showed similar distress, traders responded with due respect. 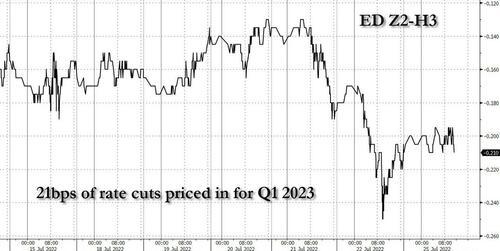 Still, could the slump in services have been a blip, a false positive? While that is possible and has happened before, it’s hard to argue that the economy isn’t visibly slowing — even if they are yet to show up on the jobs data. And market gyrations suggest that traders are in no mood to give the economy the benefit of the doubt.

What does all that mean for the Fed that meets this week, though? No one expects Chair Jerome Powell and his committee to dither and stop raising rates by 75 basis points, meaning the earlier calculus is unaltered. My conviction is that Powell will acknowledge that the economy is indeed slowing, that a soft-landing will be challenging — but that the Fed still means business on getting inflation back down to target, without ifs and buts. Although he is unlikely to say it in so many words, the Fed isn’t likely to spooked by a mild recession if it doesn’t pose any threat to overall systemic risk.

By the end of this week, the upper bound of the Fed’s target rate will — barring a last-minute hiccup — be at 2.50%. That is the estimated ballpark for the neutral rate, and depending on how inflation evolves, it’s possible that we may end the year anywhere between 3.50% and 4% on the Fed funds rate.

While the provisional US services PMI for July marked the first print below 50 in a while, traders will be watching to see if it’s a lone swallow or one that heralds a summer of discontent about the economy. Should it be the latter, we should prepare for an inflection point in long-dated Treasuries.