A major morning television show in the UK deleted a Twitter poll asking if vaccines should be made mandatory after the results showed that 89% of respondents oppose compulsory shots. 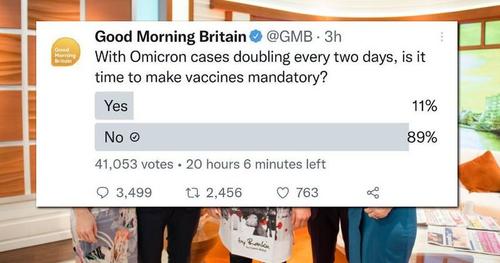 Good Morning Britain, which often tries to set the news agenda, posted the poll which asked the public, “With Omicron cases doubling every two days, is it time to make vaccines mandatory?”

The last screenshots Twitter users were able to obtain before the poll was wiped showed 89% oppose mandatory vaccinations, with just 11% in favor after a total of over 42,000 votes.

Hi @GMB – why did you delete this poll? pic.twitter.com/OcAUkuYXdu

People demanded to know why the poll had been pulled, although it wasn’t exactly hard to guess.

Why did you delete this poll, is it because you were asked? Or because it shows the people don’t support this s**t, this tyrannical future your colleagues seem to want. We see you,” commented one respondent.

“Guess that wasn’t the answer they were looking for,” remarked another.

Good Morning Britain has failed to explain why it removed the poll.

However, it’s unsurprising given that the broadcast has been a vehicle for pushing pro-lockdown messaging since the start of the pandemic.

For most of that time, it was hosted by Piers Morgan, an aggressive proponent of lockdowns, mandatory vaccines and face masks.

The show also regularly features Dr. Hillary Jones, someone who at the start of the pandemic warned that face masks could make the spread of the virus worse, before getting the memo and doing a complete 180.

“… the use of masks is not proven to be effective … most masks have gaps in them through which the virus can drive a bus. The virus size is 1/10,000th of a millimetre and if you magnify a mask the holes are huge” pic.twitter.com/gOlRWT58Wb