Following a fast-moving snowstorm late last week that sparked a massive 100 car and semi pileup in central Illinois, another round of winter storms could wreak havoc across the country during Presidents’ Day week.

Meteorologists at private weather forecaster firm BAMWX reports two rounds of snow and ice are expected from the West to the Plains, Midwest, and Northeast next week.

“Another week lies ahead of us, with multiple high-impact winter storms affecting millions,” said Kirk Hinz, COO and chief meteorologist at BAMWX. He said the first winter blast “comes late Monday into Tuesday as a low-pressure system strengthens from Oklahoma to Detroit, bringing widespread accumulating snow to the northern plains and upper Midwest, ice to Des Moines, near Chicago, Milwaukee, and SE Canada. Also on tap is excessive rainfall + severe weather from the Ark-La-Tex region to the Tennessee Valley.”

Hinz said the second winter storm could be even more powerful than the first and is expected later in the week. He said, “right now, we are targeting a potentially major winter storm developing again from the southern plains to the Northeast. This brings ice threats near Dallas, Oklahoma City, St Louis, Indianapolis, Louisville, Cleveland, Pittsburg, and Philadelphia…accumulating snow from Kansas City, Chicago, near Indianapolis, Detroit, and the interior Northeast.”

BAMWX’s weather impact map for next week outlines the two storms and possible timing. Nothing is locked in, so timing and impact areas could change. 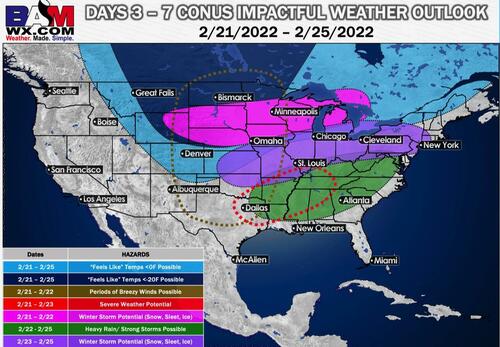 For both storms, snowfall totals show the heaviest impact areas could be the Upper Plains, Midwest, and Interior Northeast through the end of next week. 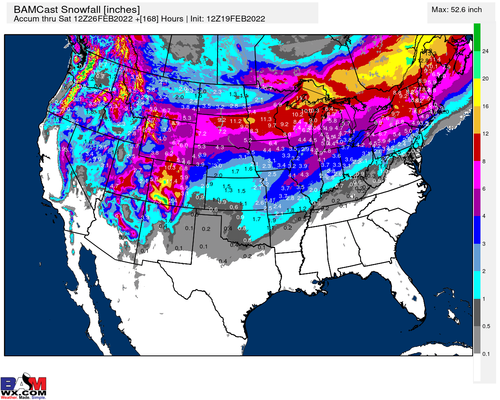 Another component of the storms could be ice. It’s something to watch as accumulated ice total estimates show possible impacts from Texas to the Midwest to the Mid-Atlantic region. 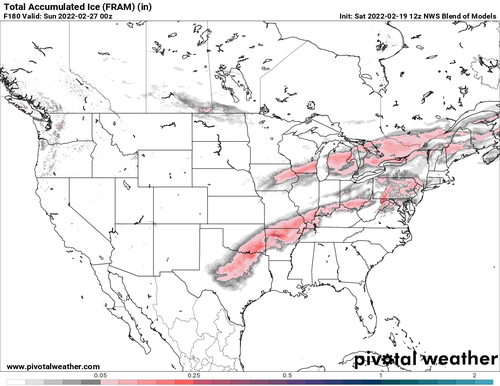 Cold weather will be in place and plunge as deep as the Lower Plains. Across the Lower-48, average temperatures will decline on Tuesday and remain well below a 30-year trendline through the end of the month.

Hinz concluded that wintry risks across the Lower-48 could diminish as soon as early to mid-March.