Two weeks ago, after Twitter reported disappointing earnings and admitted that it was “overestimating” millions of users since 2019, we asked whether this “merits a purchase price adjustment.”

Twitter gets acquire and quickly admits it was “overestimating” millions of users since 2019. Does this merit a purchase price adjustment? cc: @elonmusk pic.twitter.com/RDK7Q5LHeY

A few days later, noted short-seller Hindenburg Research picked up on this and in a report warned that Twitter is overpriced and that there is “significant risk” that the deal could get repriced lower.

Fast forward to today, when amid growing speculation that Elon Musk’s deal to buy Twitter might collapse, that he might walk away, or hold out for a better price, as the recent turmoil in markets – especially for tech stocks – have caused equity valuations to re-rate lower en masse, Musk has confirmed just that on Twitter.

Musk posted the comments about the deal on Twitter (where else?), and referenced a Reuters report citing Twitter claiming that fake accounts represented less than 5% of users… 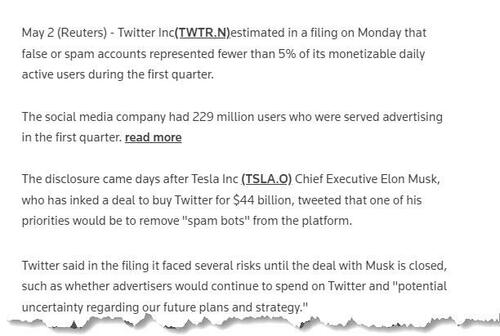 … With Musk clearly implying that Twitter is lying and that this number is largely off.

Twitter shares tumbled as much as 21% in pre-market trading in New York, while Tesla shares were up more than 6% on the news as investors hoped that Tesla shares would now no longer be at risk due to their status as collateral. 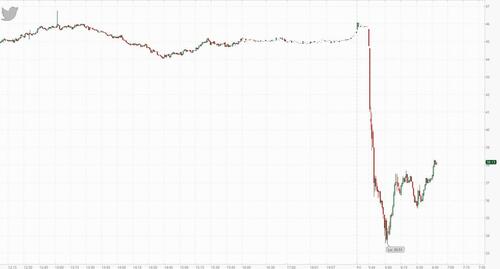 It remains to be seen if this is just an honest request for post-deal diligence by Musk or just the first overture in repricing a deal, where there is a $1 billion break up fee, which we are confident lawyers on both sides will be happy to litigate over the coming years. Meanwhile, if Musk does drop the deal, with so many Twitter employees already quitting, will there be a company left for anyone to run in a few months?

As for Twitter’s few remaining employees…

Will be awkward if instead of “canceling” dissenting voices, Twitter’s legal team was helping cook the books