Considering the fact that M&A advisors and investment bankers typically encourage whatever idea their clients are pushing no matter how ludicrous, the fact that one bank is speaking out against a push to slap an ‘ESG’ label on defense stocks is remarkable. And yet, here we are. 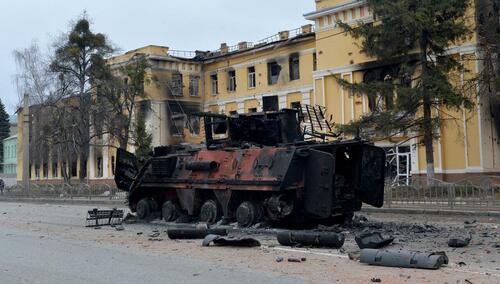 On Wednesday, Vicki Kalb, the London-based head of ESG research for Europe, the Middle East and Africa at UBS, insisted that the debate over slapping an ESG label on weapons-makers “misses the point”. While some banks have already moved to slap an ESG label on certain defense stocks, citing the urgency of the war in Ukraine, these decisions are “essentially meaningless” and risk undermining the industry’s credibility in the eyes of clients, as she explained.

“There is a lot of emotion clouding the debate and not necessarily rigorous analysis,” she said in an interview. “The ESG issues that tend to get attention tend to resonate emotionally.”

When it comes to the question of “what is ESG investing,” Kalb said her experience is that “people unnecessarily tie themselves up in knots.”

“There’s a lot of conflating of what is ESG,” she said. “It has to be defined by the fund manager on a specific fund mandate.” Ultimately, except in cases, for example where investors have a religious mandate, ESG investing “isn’t a moral judgment.”

Her comments were picked up by Bloomberg as Scandinavian banks moved to reclassify long frowned-upon weapons stocks as ESG,

Russia’s war on Ukraine has given birth to a once unthinkable idea as the defense industry — long frowned on by sustainable investors — is recast by some as a tool for preserving democracy. SEB AB, one of Sweden’s biggest banks and a pioneer in the field of green bonds, recently said it was updating its sustainable investing policy to make room for weapons. And Commerzbank AG has said its doors are wide open to Germany’s arms manufacturers, many of whom said earlier this year they struggled to get funding.

Looking back over recent decades, using the ESG label for defense stocks (all to tap into the ESG investing craze that has swept the globe) is one of the greatest examples of ‘doublethink’ on Wall Street. If weapons makers are considered environmentally and socially responsible now, then why not add oil and gas makers – long criticized as the antithesis of ESG – to the category as well?

But first, let’s consider a cautionary tale: the American defense contractor Raytheon. The company makes weapons that have been used by the Saudi government in its massively destructive proxy war in Yemen. If a company like this is slapped with the ‘ESG’ label, then it would risk undermining the credibility of such labels. Up would become down, dark would become light…you get the picture. Yet, shares of the defense contractor have already been inluded in some ESG funds, according to Bloomberg data.

And now, the EU (at the behest of arms industry lobbyists) is quietly pushing financiers to use the label on defense stocks at a time when the bloc’s defense spending is surging due to the war in Ukraine.

In the European Union, arms industry lobbyists are now urging policy makers to include weapons in a so-called social taxonomy, which is the next chapter in the bloc’s ESG rulebook for financial markets. And there are signs some EU decision makers are listening. At the same time, defense spending is skyrocketing, and companies like Lockheed Martin Corp. and Saab AB have seen their stock prices soar to record highs.

Ultimately, whether defense stocks are included in ESG funds will be the decision of the portfolio managers who control those funds, as UBS’s Kalb clarified, there isn’t a “unilateral position” on excluding the defense sector, since ESG funds can already invest in companies involved in the weapons industry (or whatever other companies they like, as we have shown).

At the end of the day, investors will be the judge.