Yesterday’s stellar 3Y auction was followed by a very ugly sale of 10Y notes which priced moments ago at the highest yield since Nov 2018 and tailed the When Issued by 1.4bps.

The internals were solid as well, with foreign buyers, or Indirects, awarded 70.3%, the most since February and just above the 69.25% recent average. And with Directs taking a solid 18.2%, also higher than the 16.6% recent average, Dealers were left with a near record low 11.5%, sharply below last month’s 18.7%. One can be certain that the end of QE has a factor in this. 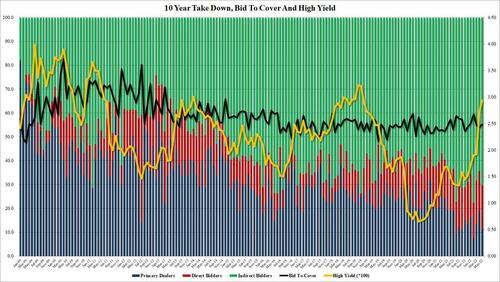